In 2015, the people of Tamil Nadu witnessed one of the worst tragedies of their lives, standing on the roofs of their houses waiting for food and rescue teams, people in Chennai had a near-death experience. Three years later in 2018, the Comptroller and Auditor General (CAG) report that was tabled in Tamil Nadu Assembly on July 9, states that the disaster, which many have been made to believe was a natural calamity, was in fact a man-made disaster.

The report squarely pins the blame on the AIADMK government for the disaster for not following the recommendations on emergency situations.

According to the Tamil Nadu government, 470 people died between October and December, 2015, due to the floods.

J Jayalalithaa, who was then chief minister of Tamil Nadu, in a detailed statement had said that the unprecedented rains witnessed in parts of the state was the cause of the deluge and also the huge damage in Chennai, Kancheepuram, Tiruvallur, Cuddalore, Tuticorin and Tirunelveli districts.

The CAG report, which had been released in 2016, challenges Jayalalithaa's narrative. The report makes strong remarks against the state government over the way in which the 2015 Chennai floods were handled and goes on to call it a 'man-made' disaster.

In the face of sustained pressure from Opposition parties, the Tamil Nadu government was forced to table the report in the Assembly on July 9, the last day of the session.

Playing down the report, fisheries minister D Jayakumar said, "It is a 2015 report based on the experience we had in that year. While there was heavy rain in 2016 and 2017 too, the occurrence was controlled."

What Jayakumar seems to have missed is that even in 2016 and 2017 many regions in Chennai became victims of heavy flooding.

"Those were only minor floodings," said Jayakumar, adding that the concerned departments will reply to the CAG report.

The report has pointed to grave problems in the functioning of the water resources department that led to the tragedy.

The report states that excess water was released from the Chembarambakkam reservoir and this led to the overflowing of the Adyar river. 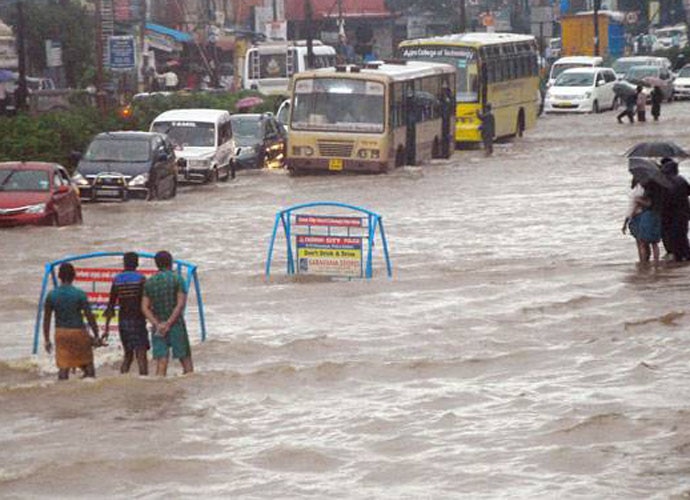 The report points out that the water resources department did not follow the Central Water Commission (CWC) norms on releasing water from the reservoir and states that the discharge of water could have been maintained at 12,000 cusecs for another six hours but the water was released in an indiscriminate manner to save the patta lands in the foreshore area. And the continuous 21 hours of release of 29,000 cusecs water to the Adyar river was seen as the main reason for the flooding.

"Chembarambakkam tank despite being a major tank did not have any scientific inflow forecast system and lacked a mechanism for real-time flood forecast which was not in accordance with the CWC norms for dams' safety procedure and reservoir regulation schedules. The government of Tamil Nadu failed not only to create new reservoirs and check dams to mitigate the flood hazards due to monsoon rains but also did not take any action to divert flood water from Adyar river despite recommendation by nucleus cell and expert committee resulting in inundation due to floods in 2015 December rains," read the report.

Shockingly, the water resources department did not even have a Compendium of Rules of Regulations (COR) for Chembarambakkam reservoir. The compendium lapsed 23 years back.

In 2005 too, a major flood had hit Chennai and its neighbouring districts and even after that an emergency action plan was not set up by the government. The lack of government initiatives to keep its systems in check and rules and regulations in place have also been highlighted in the CAG report.

"We are not surprised with the CAG report. We have for long maintained that the government's environmental policy is detrimental to the interests of the state. This government is keen on filling its coffers. The way it handled inflow and outflow of water was done in an indiscriminate manner," said DMK spokesperson R Kannan.

We saw the same mismanagement of affairs in 2016 and 2017. In 2017, the state government was caught trying to remove encroachments when the parts of the state were already flooded.

In the context of the 2015 report, the CAG notes, "All factors put together indicate that it was a man-made disaster and unless the government of Tamil Nadu takes full charge of mitigating the contributing factors leading to December 2015 floods another disaster cannot be ruled out."

Experience shows no lessons have been learnt from all the tragedies faced. But the big question is — will the government act now? Seeing the way in which ministers are trying to dismiss the report, there is little hope.