China is facing a record surge in Covid-19 cases. The country reported 4,770 new Covid-19 infections on Tuesday, March 22, 2022. China also reported 2 new deaths on Saturday, the first deaths in over a year due to Covid-19. 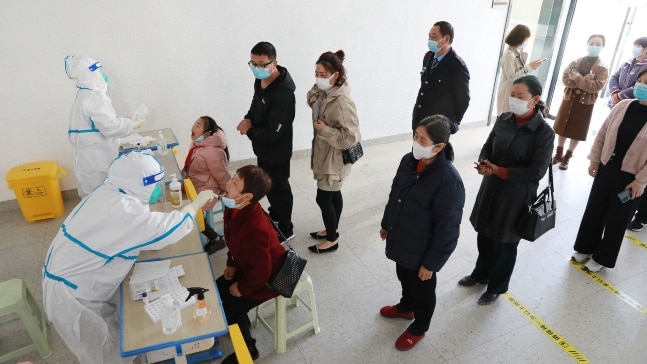 People line up for Covid-19 tests in China. Photo: AFP

Here are the big updates on the Covid-19 situation in China:

Chinese authorities locked down Shenyang, a city of 9 million people, overnight. Shenyang is an industrial hub popular for hosting factories like that for BMW. Authorities found some 47 new Covid infections from the city.

Residents have been ordered to stay at home. Anyone who needs to leave their homes needs a 48-hour negative PCR test.

Shenzhen reopens after Covid lockdown but controls stay in place for some https://t.co/EBDizGT3fx

Shenzhen, which went into a lockdown last week, has reopened now as the infections have dropped. Apple iPhone assembler Foxconn also resumed its operations after a brief hiatus. Public transportation has been opened up, but large gatherings remain banned.

Welp—Disney Resort Shanghai said on Sunday it will temporarily close until further notice, citing the new #COVID19 surge in China. China is fighting its biggest wave of locally transmitted Covid cases since it contained the initial outbreak. https://t.co/zfioKoPMUf

Panic at Wuai Market in Shenyang, China when a case was discovered inside during testing. pic.twitter.com/UMYpOFtFl9

Reports say that Chinese citizens are increasingly becoming frustrated with the government’s one-size-fits-all Covid policy. One video from Shenyang showed citizens trying to escape a mall after a Covid positive case was found in the mall and authorities trying to close the doors.

However, it’s not just frustration over the harsh policies. Some stories shared on China’s social media claimed that people lost their loved ones due to Covid disruptions. One cancer patient receiving chemotherapy at Shanghai Cancer Hospital died while being locked down in a lodging next to the hospital.

While there are numerous videos circulating purportedly from China, showing healthcare workers beating up citizens, reports say it hasn’t been easy for the authorities either. South China Morning Post reported that authorities who failed to keep infections under control and those who failed to impose the restrictions were fired or suspended or put in back of the line for promotion.

At least 70 officials in China have been fired or disciplined in the past month due to Covid-19 reasons.