Stop the shame, China. The lifting of the ban on using tiger and rhino parts is a call for their extinction

China legalises the use of tiger bones and rhino horns for "medicinal purposes". This is a death sentence for the animals. Apart from poaching, this will also spur terrorism and the narcotics trade.

Conservationists across the world have never held the Chinese concern for wildlife in much esteem — for a good reason.

Here is the latest reason why Beijing is guilty of letting down conservationists — yet again.

On Monday, China reversed the quarter-century-old ban on trade and use of rhino horns and tiger bones. This time, for “scientific and medical uses”, apparently.

Oh, China! What have you done? Or undone

China has reversed the quarter-century-old ban on using rhinoceros horns and tiger bones in medicine. The law, which has been in place since 1993, has now been altered so that the bones and horns can now be used in “medical research or in healing”.

The move is in complete contradiction to the commitment that China made in 1993 after it joined the Convention on International Trade in Endangered Species of Wild Fauna and Flora, or CITES. At that point, China had banned all use and trading of tiger bone and rhino horn — a ban in effect until Monday. No reason was given for the lifting of the ban, which was implemented amid a global push to protect fast disappearing endangered species. “Tiger bones and rhino horns should no longer be used in medications,” the notice of the CITES ban then said. CITES is an international agreement among governments of more than 170 countries controlling the trade of endangered species. Beijing had gone on to also say that the Chinese “government-encouraged research of substitutions of medicines using the endangered animals.”

The use of tiger bones was removed from the traditional Chinese medicine (TCM) pharmacopoeia soon after when China had first introduced a domestic ban on tiger trade.

“Tiger conservation has become a political issue in the world. Therefore, it’s necessary for the traditional Chinese medicine industry to support the conservation of endangered species, including tigers,” Huang Jianyin, deputy secretary of World Federation of Chinese Medicine Societies (WFCMS) had said back then.

The decision by the Chinese government comes less than a year after it officially banned the trade of ivory — a move that redeemed China in the eyes of the conservationists.

But when have we ever known the Chinese to be too consistent?

According to the latest mandate, “Under special circumstances, trading or using of tiger bone, rhino horn or any products containing them should apply for permission. Tiger bone or rhino horn for medical treatments can be prescribed by doctors certified by the State Administration of Traditional Chinese Medicine. Scientific research such as genetic studies that require tiger or rhino products may submit applications, and the products should be used only for the purpose specified."

One would wish that the ignominy would stop there. But perhaps that would be expecting too much from our neighbours.

The statement by China’s cabinet, the State Council went on that “antique tiger and rhino products are also permitted if they are gifted or inherited assets.”

So, does Chinese "medicine" work?

By China's own admission — NO. Chinese medicines, much like all their other products that flood the global markets, have possibly never been known to be effective. The World Federation of Chinese Medicine Societies issued a statement in 2010, saying there was no evidence for claimed medical benefits of tiger bone or rhino horn, and urged members not to use any other parts from endangered species.

Agencies like WWF and TRAFFIC International had welcomed the statement that was made at a symposium in Beijing. The statement further said that some of the claimed medicinal benefits of tiger bone have no basis. Similarly, rhino horn has for centuries been believed to hold medicinal properties to cure gout, fever, arthritis, headaches, nausea and stomach disorders, anxiety, boils, infantile convulsions, food poisoning, and inflammation and infections. Some older myths claim that it is also effective in the treatment of hallucinations, snakebites and "demonic possessions".

It does not stop there. Many Chinese and Vietnamese further believe that powdered rhino solution in water can cure cancer.

Only that rhino horn is made of keratin — the same protein that makes up human nail and hair. So rhino horn should be as effective in curing ailments as chewing on our fingernails or hair should be.

But when have facts ever stopped illegal trade?

Despite the prohibitively high prices, the Asian market for traditional medicines continues to invest in them. A lucrative trade in tiger and rhino body parts also flourishes for gifting purposes. A single tiger skin — considered a premium dowry — fetches around Rs 6.5 million.

What does this now translate to?

The direct consequence of this order, as WWF was quick to point out, is that even if the usage is restricted to antiques and in hospitals, this trade would flourish. There would now be confusion amongst consumers and law enforcers as to which products are legal and which are not legal. This chaos is what poachers and the smuggling mafia wait for. The lines between legal and illegal markets would blur, expanding the markets for other tiger and rhino products. And before we know it, we would have wiped tigers and rhinos off the face of the earth.

In 1960, there was an estimated population of 1,00,000 black rhinos in Africa — today, there are fewer than 28,000 rhinos of all species left in Africa and Asia, according to the 2016 UN World Wildlife Crime Report. Most of them have been victims of poaching.

India is not — and cannot be — impervious to China's mandate, for it spells a death knell for Indian conservation efforts. 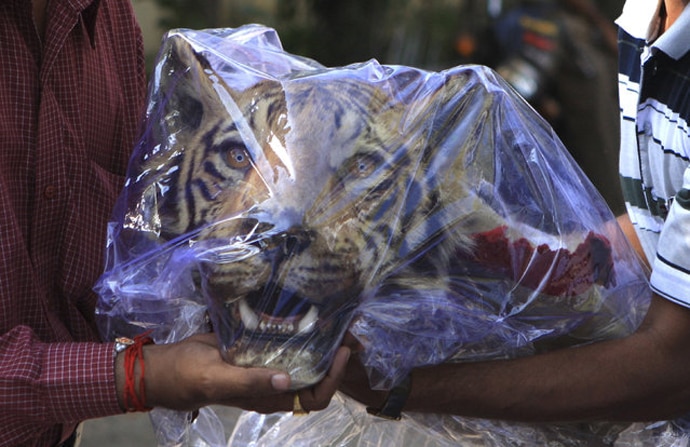 Seized head of a poached tiger in Nagpur. The poachers were arrested at the airport, allegedly trying to smuggle the head and skin of the tiger. (Photo: Reuters).

India has the largest population of Bengal tigers and one-horned rhinos in the world. The 2018 rhino census estimates numbers at 2645 individuals and the 2015 tiger census roared at 2226 individuals.

Look back at 1966, when the rhinos poached from India to China had left us with 366 individuals — the immense efforts by Indian conservationists and the government could bring the numbers up to 1855 in 2006, up by a whopping over 600 per cent to 2645 individuals in 2018.

All these efforts are now at the brink of futility.

The tiger population in India hit an all-time low of 1,411 individuals in 2006 — poaching being the primary cause — and bounced to 2226 barely nine years thence.

These efforts, and the population itself, are sure to be wiped out entirely if China does not reverse the new mandate on an immediate basis.

It is a known fact that tiger and rhino poaching in India primarily caters to the Chinese market for traditional medicines.  Ironically, a day after China lifted the ban, the findings of WWF's Living Planet Report study was released. It showed that humans have wiped out 60 per cent of the world’s mammals, birds, fish and reptiles since 1970 — a level of annihilation that scientists are beginning to call Earth’s sixth mass extinction.

It is comparable to the asteroid that wiped out the dinosaurs.

Does it stop with the wild world?

No. It has been established, over and over again, that illegal wildlife trade, directly and indirectly, funds narcotics, illegal weapons and terrorism. Environmentalists have repeatedly asserted that outfits like Al Shabaab and the Lord’s Resistance Army (militant groups in Central and Eastern Africa) fund their operations through poaching. Part of a 33 rhino horn shipment seized by Chinese Customs and Excise Department in Hong Kong in November 2011. (Photo: Reuters)

“Governments are increasingly acknowledging that there is a convergence between the criminal networks involved in wildlife trafficking, human trafficking, and drugs and weapons smuggling,” Kate Brooks, photojournalist and director of the documentary film The Last Animals told TIME.

Irony hits again. Three days ago, on October 26, the US Attorney General Jeff Sessions addressed a forum on the illegal wildlife trade in Washington DC. In his speech, he said that the USA “views the poaching and trafficking of protected wildlife as a threat to good governance, a threat to the rule of law, and a challenge to our stewardship responsibilities to this good earth,” and would take renewed steps to combat the problem overseas.

The regulations do come with small solace — it limits the sources of animal parts to captivate bred tigers that die a natural death. “Rhino horn power for medical use can only be obtained from captive-bred rhinos, and tiger bones from those of natural death.” But there is no way to establish if the tiger bones sourced were from a natural death or not.

About 200 Chinese tiger farms house over 6,000 captive tigers, ostensibly to "release into the wild". This is twice the global wild population. Not one has been released so far.  In its statement, China's State Council said any illegal trade of rhino and tiger products would be subject to "severe crackdowns" and illegal products would be confiscated.

But then, who is checking?

Also read: Albino tiger cubs born in China zoo. But hold your applause. It's not awwww.

Post your comment
#Rhino horn, #Tiger bones, #Conservation, #Poaching
The views and opinions expressed in this article are those of the authors and do not necessarily reflect the official policy or position of DailyO.in or the India Today Group. The writers are solely responsible for any claims arising out of the contents of this article.