Assam is calling CAB a violation of Assam Accord. Tripura says it lost jobs to Hindu Bengalis.

The situation is Assam is normal. After violent protests when curfew is clamped down even as fires and anger simmer, government says things are normal. So, Assam has returned to normal as has the rest of Northeast.

But Wednesday night was particularly violent. As Rajya Sabha green-flagged the Citizenship Amendment Bill 2019 (CAB), violence and vandalism, reminiscent of the six-year movement that ended with the signing of the Assam Accord in 1985, rocked the state. The Army organised flag marches even as other security forces resorted to firing to disperse crowds and establish 'normalcy' in the state. The curfew that was imposed on Wednesday has been extended indefinitely. 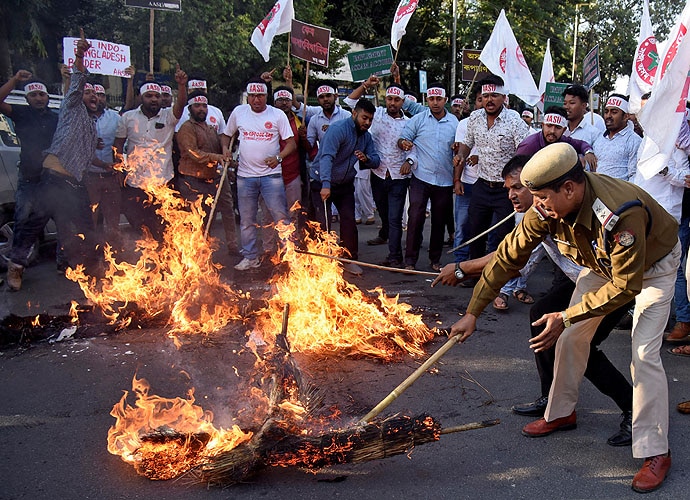 Curfew in Assam has been extended indefinitely. (Photo: Reuters)

To ensure the fire doesn't spread through social media, there is no internet in large parts of Northeast, particularly Assam and Tripura. There are no SMS services either.

While many in the country have opposed CAB, Northeast, in particular, has flared up against the legislation, which is just a Presidential nod away from becoming law.

The CAB selectively relaxes the eligibility rules for immigrants in getting Indian citizenship.

Under the Citizenship Act, 1955, which CAB has amended, an immigrant must have lived in India for 11 of the previous 14 years. CAB relaxes this to six years for six minority (non-Muslim) religions — Hindus, Sikhs, Buddhists, Jains, Parsis, Christians — from Afghanistan, Bangladesh or Pakistan. With the passage of CAB, the cutoff for citizenship becomes December 31, 2014.

To be included as citizens, applicants need to prove that they (or their ancestors) were present in Assam before that date.

Protesters in Northeast argue the move would lead to the dilution of their identity as CAB would allow Bangladeshi immigrants to come in and settle in these regions 'legally'. Illegally though, this influx has been going on in Assam and Tripura for decades now.

India and Bangladesh share a 4,156-kilometre-long international border. This is the fifth-longest land border in the world, including 262 km in Assam, 856 km in Tripura, 180 km in Mizoram, 443 km in Meghalaya, and 2,217 km in West Bengal.

The government says it has made exceptions for Northeast and given relaxations, but the assurances have failed to assuage concerns because large parts of the states where the government claims to have given exceptions will still have to accommodate the influx. 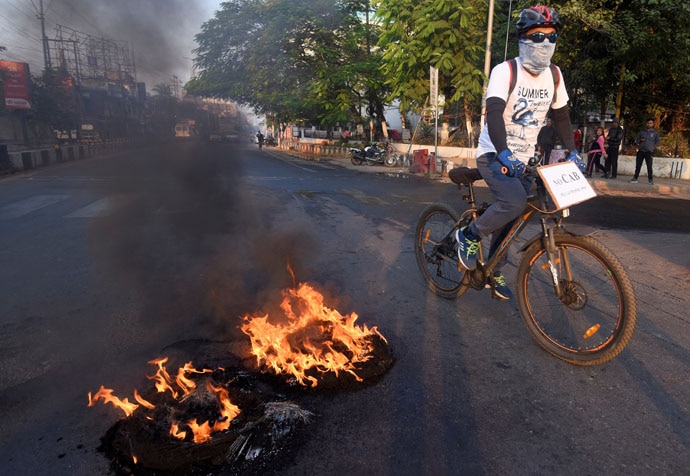 Assam is up in flames over the passage of the Citizenship Amendment Bill. (Photo: Reuters)

There are two grounds under which the region has been granted exemptions — states protected by Inner Line Permits (ILP), and areas covered under the Sixth Schedule of the Constitution.

The ILP is a special permit that Indian citizens from other parts of the country need to enter a protected state. No citizen can visit an Inner Line area without a permit granted by the state government.

The Sixth Schedule allows for the formation of Autonomous District Councils (ADC) to administer areas which have been given autonomy within their respective states. Most ADCs are in Northeast, while two are in Ladakh.

Tripura joined India in 1949. It has seen an influx of both Bengali Hindu and Muslim migrants in the state since then. In fact, the influx began in 1947 itself as India was partitioned. Tripura residents claim their jobs have been taken not just by Bengali Muslims, but Bengali Hindus too.

There is one ADC in the state and it covers about 70 per cent of the area. But Tripura is on the boil because two-thirds of the state's population stays in the 30 per cent of the region where CAB would apply. Assam has three ADCs, but a large part of the state would still be left out from the Sixth Schedule relaxation. Also, Assam has been on the receiving end of migrant influx for long.

In the late 1970s, an extraordinary student movement took roots in Assam. On June 8, 1979, the All Assam Students Union went on a 12-hour general strike demanding the 'detention, disenfranchisement and deportation' of 'all' foreigners.

And then on February 15, 1983, a wireless message was sent from the Nagaon police station in Assam, "Information received that last night about one thousand Assamese of surrounding villages of Nellie with deadly weapons assembled at Nellie by beating of drums [.] Minority people are in panic and apprehending attack at any moment [.] Submission for immediate action to maintain peace[.]"

Three days later, Nellie and over 10 nearby villages were surrounded by armed mobs. From 8 am to 3 pm, over 2,000 people were butchered to death. Unofficial figures put the figures to over 3,000. Most victims were Muslims from Bangladesh. Officially, over  2,000 people were butchered to death in Nellie and surrounding villages, in 1983. (Photo: Wikimedia)

Two years later, the Assam Accord was signed, fixing a cutoff date for immigrants.

"All persons who were expelled earlier, but have since reentered illegally into Assam shall be expelled (sic)."

What about other states

Like Assam, Meghalaya too has three ADCs. But, unlike Assam, ADCs cover most part of the state leaving out only a part of Shillong. The whole of Arunachal Pradesh is covered under ILP and is thus exempted from CAB. The same is the case with Mizoram and Nagaland which are under ILP.

Manipur, on its part, wasn't covered under ILP or under the Sixth Schedule. But once the government moved CAB in Parliament, it covered the entire state under ILP. Dimapur, in Nagaland, which wasn't under ILP has also now been covered under the new ILP.

So, the problem basically centres around Assam and Tripura which are up in arms against CAB.