Supermom 'Collarwali' is not just a prolific breeder, but also an astute raiser — a true 'tiger mom' in every respect!

About one per cent of India’s tiger population (as per 2014 estimates) could be the contribution of one tigress alone.

You read that right. The tigress known as “Collarwali” in Pench Tiger Reserve (PTR) has given birth to a set of quadruplets — taking her total tally of litter to 29 in her 13 years as of now.

The highly fertile tigress 'T-15', popularly known as “Collarwali” because of her radio collar, was reportedly spotted on Sunday with four cubs in PTR, as confirmed to DailyO by Pench field director, Vikram Singh Parihar.

This is her eighth litter — the last she had given birth was in 2017, to quadruplets.

Here is why the news is exciting for wildlife enthusiasts:

Royal Bengal Tigers normally have a life span of 15 years. The female reaches sexual maturity at the age of 3 to 4 years and gets into heat at 3–9 week intervals. She is receptive for 3–6 days when she mates with the male. Post this, there is a gestation period of about two and a half to three months after which she gives birth to a litter — the litter size could vary between one and four cubs. The cubs normally live with the mother for about three years before they separate from the family group and establish their independent territory. It is only after the cubs go their separate ways that the mother comes into heat again.

Assuming the tigress attains sexual maturity at the age of 4, littered every three years since — average litter size being quadruplets — for 13 years, the total tally of cubs would have been around 16 to 18 cubs so far.

How did Collarwali manage this feat?

A combination of factors — including good luck and Collarwali being an excellent mother and rearer.

Collarwali reportedly littered for the first time in May 2008 — she gave birth to triplets. An inexperienced mother, she was unable to protect her cubs from the harsh monsoons, and her newborns died of pneumonia within three months. Collarwali — the queen mother of Pench — with her one-year-old cub in 2016. (Screengrab: YouTube)

In October 2008, Collarwali produced her second litter — quadruplets. On October 23, 2010, she had her third litter — quintuplets (five cubs) this time.

Another boost to the future of tigers in Madhya Pradesh as the tigress -Collarwali has given birth for the 8th time, with 4 newborns welcomed at the Pench Tiger Reserve. In last 15 years, the tigress has given birth to 30 cubs, which is a record for the reserve in MP. #SaveTigers pic.twitter.com/kssUI5IUuq

She is known to let her cubs start hunting on their own early on in life — a 'tiger mom' through and through. The cubs branch off independently as early as 18 months thereof. In fact, she is considered to be such a good mother, that she constantly maintains a rapport with her cubs from different litters. Her cubs from different litters have also been sighted together — a rarity in the wild, says Parihar. 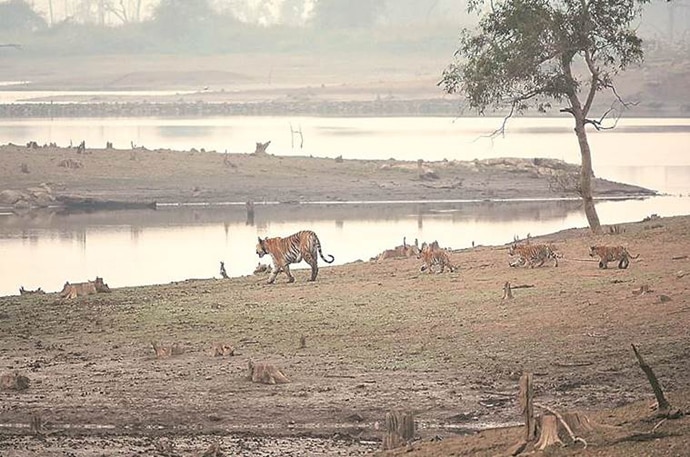 Collarwali’s mother — Barimada — was herself considered a prolific breeder — the mother of almost all the tiger show stars, who, at 16 years, had successfully reared eight litters as of 2015. Collarwali was born to Barimada around September 2-3, 2005 and was first sighted on September 9, 2005, when her eyes had not even opened, says Parihar.

Barimada featured in the BBC documentary Spy in The Jungle by David Attenborough.

The documentary had filmed Barimada and her four cubs — as she reared them over two years — in Pench. The documentary, that Attenborough described as “the most intimate portrait of tigers ever” — was reportedly filmed with immense efforts using secret cameras that were mounted in elephant trunks. One of those four cubs in the documentary was Collarwali.

Clearly, mothers like Barimada and Collarwali do not need any birth control measures.

A word of caution

While Collarwali has mated with all three males in the region — T30, Chhota Male and Rayyakasa (who has been with her since 2012) — her litters, for the most part, have been with one resident male, T30, confirms Parihar. With as many cubs — most likely with the same male — even the instinctive dispersal of the tigers and establishing foolproof territories to guard against inbreeding might fail. Parihar agrees — he says the chances of inbreeding might increase with so many cubs of the same mother.

The two-day Third Stock Taking Conference on tiger conservation concluded in Delhi yesterday (January 29, 2019). The conference focused on deliberations by the 13 tiger range countries on the status of the Global Tiger Recovery Program (GTRP) and combating wildlife trafficking.

At the inaugural, Union Minister for Environment, Forest and Climate Change, Dr Harsh Vardhan — Chairman of the National Tiger Conservation Authority — reportedly said, “The New India that we envisage is not only for humans but for every aspect including wildlife.”

While Barimada and Collarwali might help proliferate our numbers, it is entirely up to the authorities to ensure that the tigers live a complete life without being poached or their habitats degraded.

#Barimada, #Collarwali, #Pench tiger reserve, #Tiger population
The views and opinions expressed in this article are those of the authors and do not necessarily reflect the official policy or position of DailyO.in or the India Today Group. The writers are solely responsible for any claims arising out of the contents of this article.