Most of India's container traffic is handled by Colombo port.

China's ambitious 269-hectare (660-acre) Colombo Port City (CPC) project is poised to take off when the reclamation of land from the sea is completed by June 2019. Skyscrapers, luxury hotels, shopping malls and a marina of the newly created city-within-the-city, are set to change Colombo's scenic Galle Face Green overlooking the sea. At the same time it will also change Sri Lanka's geostrategic landscape with China gaining an overbearing foothold in the Sri Lankan capital.

The $1.4 billion infrastructure project being executed by China Harbour Engineering Construction Corporation (CHEC), a subsidiary of state-owned China Communications Construction Company (CCCC), had courted controversy ever since President Mahinda Rajapaksa and Chinese President Xi Jinping, launched it on September 17, 2014. Issues of sovereignty, lack of transparency, allegations of corruption and environmental concerns dogged the project right from the word go. When President Maithripala Sirisena's government came to power in 2015, he put the project on hold till the allegations were investigated. 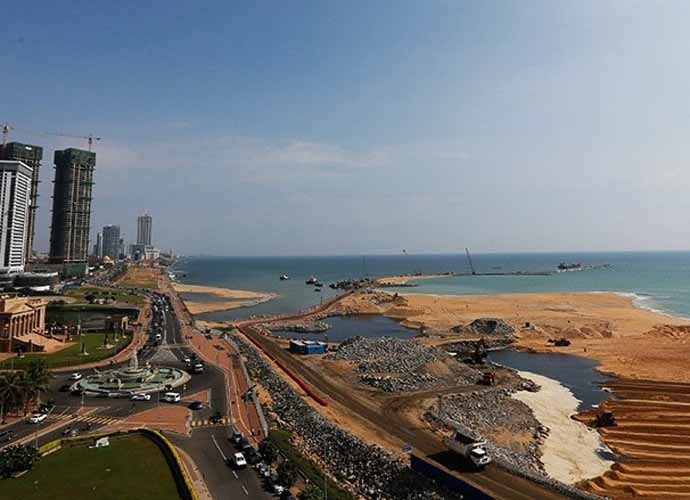 The government investigated allegations and carried out a supplementary environmental impact assessment before starting the project again, after signing a new agreement in 2016. Under this agreement, the entire 269 hectares of reclaimed land has been handed over to the Colombo Port City Holdings Ltd on 99-year lease.

The jarring note is the Chinese, with 99-year lease of the city in their pocket, will call the shot and dictate their own rules of the game. How it will impact Sri Lankans socially, economically and environmentally is a question still bothering many Sri Lankans.

Geography dictates that national security concerns of India and Sri Lanka are interlinked and as a corollary South Asia's strategic security as well. Neither of the countries can afford to ignore this geostrategic fact when they take up major development projects to improve the quality of life of their citizens. The geo-strategic implications of the CPC have to be understood in this backdrop.

Unlike the Hambantota project, which was taken up by Sri Lanka with Chinese loan, the Chinese are directly investing $1.4 billion in the CPC project. The CPC dominates the Colombo port complex, which is Sri Lanka's most valuable strategic and economic asset figuring in the top 35 busiest ports in the world. The Chinese are already in control of the Colombo port terminal. The CPC will have its own authority and laws favourable to trade and investment within the newly created city.

The CPC project includes development of an international financial centre, added as an afterthought to the original CPC project. The centre is to be developed into a major financial hub rivalling Singapore and Dubai. Such a financial centre would provide direct access to South Asia's under serviced markets. But its success would be largely dictated by its competitive ability against Dubai and Singapore, which are internationally well established.

However, if imaginatively packaged, the CPC in tandem with Colombo port could add a competitive edge to maritime trade.

Most of India's container traffic is handled by Colombo port. So, India's active participation would ensure the profitability of the CPC including the international financial centre. Already, the promoters are wooing Indian investors to take part in the project. However, India's growing strategic security concerns in the Indian Ocean region need to be addressed by both China and Sri Lanka to create an environment to encourage India's participation in the project.

When the CPC becomes fully functional in the next two years, multifaceted Chinese investment is likely to flow into the financial, commercial, trade, entertainment and residential infrastructure. With the US slapping high import tariff to cut down imports from China, Beijing is working hard to boost its trade in other big global markets — EU, India and South Asia and ASEAN. According to the promoters, the project is expected to generate 80,000 jobs in the next four years. However, the moot point is how many locals would benefit.

Already, there are indications of both China and India trying to keep their perennial geostrategic disputes at manageable levels in order to improve their working relations. Under such a dynamic environment, CPC can become an important "third party" (if you ignore the large Chinese ownership) link in progressing non-military relations between the two giant Asian neighbours to their mutual benefit. But India can ill afford to ignore the strategic advantage China has gained in Sri Lanka so close to peninsular India. Some of the concerns of CPC

The foremost concern for Sri Lanka would be to ensure that the project does not result in any action detrimental to its sovereignty, environment and society. There are too many agencies — both commercial and governmental agencies involved in managing the CPC - in which two unequal nations are participating. So when CPC gets going, it is likely to generate a host of issues related to governance including law enforcement, public services like health and infrastructure, fiscal issues like taxation and security of international financial transactions and trade specific issues of export and import. The success of the CPC will depend upon how Sri Lanka and China cooperate to ensure smooth conduct of joint mechanisms to run the project.

The possibility of China using the CPC to go on a security overdrive appears remote at present. However, China's power assertion in Indian Ocean littorals, particularly Sri Lanka, is bound to grow. As Chinese presence is already impacting the strategic configuration in the Indo-Pacific, Sri Lanka will have to be on guard to ensure its security interests are not affected with the Chinese taking control of the CPC and Colombo port. Sri Lanka cannot afford to forget that the Colombo port is its irreplaceable naval asset, apart from being a major maritime and financial hub.

CPC's importance for the Belt and Road Initiative

China has always maintained the CPC as one of the important projects of the Belt and Road Initiative (BRI). Almost all Chinese media reports and CPC press releases on its website (www.portcitycolombo.com) stress this aspect. Sri Lanka is a valuable asset in China's 21st Century maritime Silk Road as it occupies a unique place, mid-way in sea lanes of Indian Ocean's east-west trade.

If CPC succeeds, it could become a model for the Chinese to adopt elsewhere in BRI.

So, we can expect the Chinese to ensure the success of CPC project, particularly if the reclamation work is completed by June 2019 as per schedule. And it is inevitable India's strategic interests would be impacted by the CPC.

#Hambantota, #India-China Relations, #China, #Colombo port city
The views and opinions expressed in this article are those of the authors and do not necessarily reflect the official policy or position of DailyO.in or the India Today Group. The writers are solely responsible for any claims arising out of the contents of this article.