A party that has been vehemently attacking the BJP for being 'anti-lower caste' flashes its sacred thread again.

So, Rahul Gandhi the Shiv bhakt is making an arduous yatra to Kailash Mansarovar, BJP leaders like demons are trying to obstruct him, and Congress has Brahmin blood in its DNA.

This mystifying mess is from a speech recently made by Congress communications in-charge Randeep Singh Surjewala, and seems to show only one thing — the Congress is desperately trying Hindutva Lite, and not doing a good job of even that. 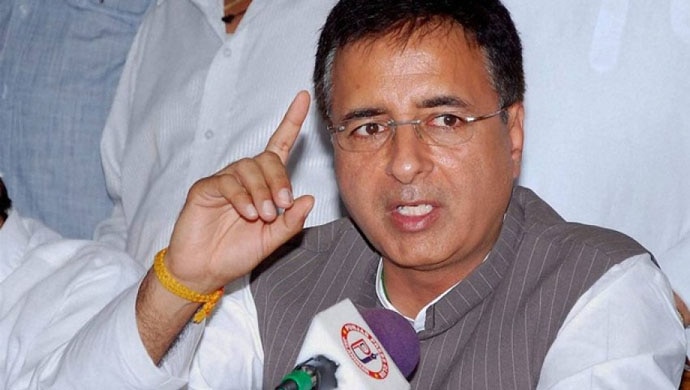 After janeu-dhari Rahul Gandhi, Surjewala has come up with Brahmin Congress. (Photo: PTI/file)

Surjewala made the statements at a Brahmin seminar in Haryana’s Kurukshetra. “One of my colleagues asked why is a Brahmin conference being held using Rahul Gandhi's photo and under the Congress party flag and the Tricolour? I said that I will respond to this from this platform one day. Indian National Congress is that party, my friends, in whose blood Brahmin Samaj's DNA is present,” he said.

The statement seems like a very honest admission from Surjewala of what the Congress’ detractors have always accused it of being: A party of elites that has traditionally considered itself to be superior to the plebeians it rules over.

Undoubtedly, the Congress has blue, Brahminical blood in its veins — a lot of its members came from the most privileged families of pre-Independence India. But this sudden pride in its aristocratic lineage is at odds from party president Rahul Gandhi’s recent attempts to position themselves as the champions of the poor and the downtrodden.

Gandhi has been going hammer and tongs at the BJP for its “anti-lower caste” mindset. He has repeatedly accused the BJP, the RSS, even Prime Minister Narendra Modi personally, of being “casteist”.

What then is Surjewala’s caste assertion? Social justice?

The Congress has probably smelt an opportunity to win over Brahmins amid reports of growing savarna anger against the BJP.

Thus, Surjewala also spoke of providing 10% quota to the poor, setting up of a Brahmin Kalyan Board, which would provide Rs 100 crore soft loan and scholarships to “needy Brahmin youths”, and naming of colleges after Brahmin leaders.

Ironically, this competitive savarna wooing began as a wave of lower castes’ anger against the ruling party, the BJP. Over the years, Rahul Gandhi has energetically attacked the BJP for being 'anti-lower caste'. (Photo: PTI/file)

Because of incidents like the Una flogging in Gujarat, the Bhima Koregaon violence and subsequent arrests in Maharashtra, and the continued incarceration of Chandrashekhar Azad ‘Ravan’in Uttar Pradesh, there had been growing disenchantment among the scheduled castes against the BJP.

In a damage control exercise, the Centre overturned a recent Supreme Court verdict “diluting” the SC/ST Atrocities Act, which has now angered the savarnas.

The Congress, all this while, had been consistently attacking the BJP for not caring about the lower castes. However, the party’s resolve to fight for the weaker sections seems tied up in sacred threads.

The Congress’ stand, at present, makes neither political nor ideological sense.

The party seeks to champion the cause of secularism and social justice, but is resorting to identity politics for votes. This is a game the BJP is clearly — and dangerously — better at.

By stirring up the identity pot further, the Congress will only ensure that the discourse gets further vitiated, and the disempowered even more marginalised.

#BJP, #Rahul gandhi mansarovar yatra, #Randeep singh surjewala, #Congress brahmin dna
The views and opinions expressed in this article are those of the authors and do not necessarily reflect the official policy or position of DailyO.in or the India Today Group. The writers are solely responsible for any claims arising out of the contents of this article.