The Congress has seen a change of symbols from bulls, to cows, to the straight palm.

Trains are being driven driverless and vaccination drives are running dry. There is nothing common between the two stories apart from, perhaps, the word drive. Let’s take you to both stories one by one tackling what may come in between and what before or after. The driverless Metro train that was inaugurated today. (Photo: ANI)

Indians and foreigners in India can hop on the driverless train, but all airlines have been told to force Chinese nationals to hop off from flights headed for India. The Ministry of Civil Aviation has ‘informally’ communicated to all airlines flying into India to not board Chinese nationals. This will apply to all Chinese nationals from China and Chinese nationals in countries with which India has formed air bubbles. The move has come over a month after China restricted Indian fliers into China. So, you can call the move a tit for tat.

The ‘tat’ came from China with two cargo vessels with 39 Indians on board being forced to be on anchorage for months. The two ships were not allowed to unload their cargo, while some other ships have been able to do so. China had first imposed restrictions on Indian fliers on the ground that cases of ‘Made-in-China’ coronavirus were rising in India.

Cases in India have begun to fall but a new concern has risen - the fear of an increase in cases of untreatable 'super gonorrhea'. Why? Because the recommended treatment for gonorrhea is a range of antibiotics like azithromycin. During the pandemic, a lot of people were given azithromycin. The World Health Organization says this may have made gonorrhea more resistant to antibiotics.

Every bad news about the pandemic seeks one answer – where is the vaccine? Punjab, Assam, Andhra Pradesh and Gujarat started a two-day dry run of the vaccination drive to check the readiness of the mechanism laid out for vaccination.

What happens in a dry run? Everything apart from actually giving vaccine to people. Cold storages are checked, transportation systems are studied, even crowd management is done at session sites to ensure social distancing. We understand that despite all this done, the question remains unanswered – where is the vaccine?

The party was founded on December 28, 1885, at Gokuldas Tejpal Sanskrit College in Bombay, by AO Hume. Do you know that the party symbol during Jawaharlal Nehru era was not the haath ka panja? It was two bullocks carrying a yoke.

So how did the bullocks take the shape of the hand? Hop on the driverless time travel machine to know the story.

In 1969, the Congress was ridden with internal conflicts. After the death of Nehru and Lal Bahadur Shastri, Indira Gandhi was Prime Minister. She decided to break out and form a new party. With majority of the Congress party members in support of her in the new party which was named Congress (Requisitionists), the other Congress came to be called Congress (Organisation). 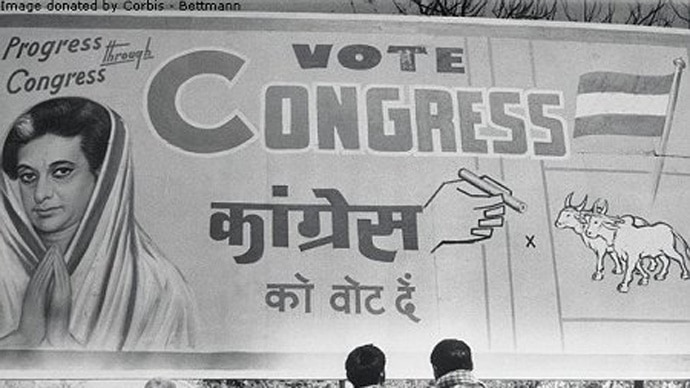 Indira tried to retain the bullocks, but the Congress (O) managed to wrest it from her. The bullocks gone, Indira turned to the cow to be the party symbol. The mother came with the child and Congress (R) had a cow and calf as its party symbol. The cow and the calf image that became Congress symbol after the 1969 split. (Photo: Wikimedia Commons)

An aggressive campaign was launched to ensure people knew the party’s symbol had changed. You see media wasn’t so pervasive then. You couldn’t just WhatsApp or put up Facebook posts to reach out. You had to go out. Indira won a landslide victory in 1971 general elections on this symbol.

Post Emergency, Indira’s leadership once again came to be questioned within the party and she decided to split the party again; her faction came to be called Congress (Indira). She was now compelled to choose a new party symbol because the old one was fast becoming a butt of jokes with Indira being compared to the cow and her son Sanjay Gandhi being compared to the calf.

Ahead of the next elections, the Congress needed a symbol. The Election Commission told the party they had three choices – an elephant, a bicycle and an open palm. Indira was in Andhra Pradesh and at the EC office was Buta Singh. The EC gave Buta Singh a day to decide, or contest without a symbol. Singh called Indira and told her about the urgency. On the night of February 2, 1978, Indira reached the house of Congress member RK Rajarathnam for consultation. It was he who suggested that the open palm would be easily recognisable. The decision was made and the Congress got a symbol that has since stayed with it.

We told you about the origin or Congress and the journey of its current symbol. Now, to what Congress means. Congress, the Word Of The Day, originated in Late Middle English to denote a meeting of adversaries during battle. It came from the Latin word congressus.

Oxford dictionary defines Congress as a large formal meeting or series of meetings where representatives from different groups discuss ideas, make decisions. That is why many countries call a group elected to make laws 'Congress. For instance, the US Congress consists of the House of Representatives and the Senate.

If the vacation season is on for you like it is on for Congress leader Rahul Gandhi, but unlike him you can’t be in Milan, you can sit at home and watch A Suitable Boy on Netflix. Despite the calls to #BoycottNetflix and boycott A Suitable Boy, the series is up and running on Netflix and it is likely many of those who raised the boycott call have silently watched it too.

But guess which boys won it big in cricket today? Virat Kohli and MS Dhoni. Kohli has earned Men’s ODI Cricketer of the Decade, and Dhoni got ICC Spirit of Cricket Award of the Decade. What won Dhoni the award was the gesture of calling back England batsman Ian Bell after a bizarre run out in the Nottingham Test in 2011. The awards are announced by the International Cricket Council (ICC), which also announced teams of the decade on Sunday. In women’s cricket, India's two senior-most cricketers Mithali Raj and Jhulan Goswami made it to the 50-over side, while Harmanpreet Kaur and Poonam Yadav found a place in the T20I team.

Skipper Virat Kohli was named the captain of ICC Test Team of the Decade. He also became the only men’s player to be named in ICC’s Test, ODI, and T20I Teams of the Decade.

A six-feet tall statue of former Union Finance Minister Arun Jaitley, meanwhile, was unveiled at Arun Jaitley Stadium. It happened to be Jaitley’s 68th birth anniversary and so the ‘gift’. Who unveiled the gift? Union Home Minister Amit Shah in the presence of former cricketers such as Gautam Gambhir, Virender Sehwag and Saurav Ganguly.

So, Ganguly who met Bengal Governor Jagdeep Dhankar yesterday met BJP leader Shah today. If something’s cooking between Ganguly and BJP, we do not know the recipe but we are on the search for it.

So, we will have to leave with you that for today and carry on with the search.