DailyOh! Covid sees mass graves in Iran. How deep are they to why an Indo-Pak match was held without spectators

The six feet under theory is not what you thought it to be.

You must have found out by now, Covid-19 has led to one death in India. The 76-year-old man reportedly died three days back and it was confirmed the death happened due to the new coronavirus only after samples from his body, collected earlier, tested positive. Newer cases, meanwhile, have been reported from several places in India, taking the total number of confirmed cases reported so far to 81. 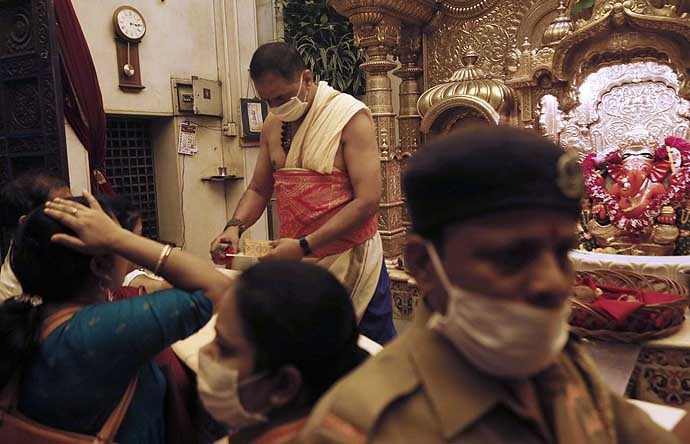 So far, 81 people have been confirmed positive for the coronavirus in India. (Photo: Reuters)

Now, we do not want you to panic but for a country like India, it is a worrying situation because of our sheer numbers. On an average, about 420 people live per square kilometre in India. In China, where the disease originated, only 145 people live per square kilometre. The closer people come to each other, the higher are the chances of spread of the contagion. We can only say, what the World Health Organisation (WHO) has been saying too, avoid public contact as much as possible.

One of the countries that are hardest hit by Covid-19 is Iran. Under US sanctions, the country has been grappling with a crumbling economy and is thus ill-equipped to deal with the pandemic. Yesterday, Iran reported 75 deaths due to Covid-19. In fact, the local outbreak is so vast that the country has begun digging mass graves. And they are so many that they can be seen from space. It is difficult to put an exact number to how many trenches have been dug but there are many. It is also difficult to say how deep they are but people, as they say, aren’t necessarily supposed to be buried six-feet under. So, where did the six feet under theory emerge from?

There are several explanations of the belief but the most convincing, according to us, is the one about the London plague of 1665. A series of orders were issued in London at that time to halt another outbreak of the Black Death. One of them read “all the graves shall be at least six feet deep”. This was done to avoid contagion which was possible from the remains of the dead.

That was then. Now, however, graves aren’t necessarily six feet deep. Various countries have their own rules on the depth of a grave. In some countries, the decision is taken by the individual cemeteries.

Anyway, we hope the coronavirus runs its course soon and we do not have to discuss such sombre stuff. But as long as the virus is infecting more and more people, let’s be super cautious. If you have flu like symptoms, do not just sit at home quarantining yourself. Seek help. Where? On +91-11-23978046.

You can follow this link (https://www.mohfw.gov.in/) for more details on where you can find help. If you have flu like symptoms, do not just sit at home quarantining yourself. Seek help. (Photo: Reuters)

The government has set up special centres where suspected people are being screened and where those tested positive for the disease are being quarantined. But have you ever thought about what the word quarantine means and where did it come from. We thought about it and we came with some answers which we will share with you because quarantine was our Word Of The Day.

People may succeed in keeping themselves isolated from Covid-19, but the Indian markets couldn’t. The markets have been in a state of free fall over the last couple of days and today it became so bad that trading had to be stopped both on the Bombay Stock Exchange (BSE) and National Stock Exchange (NSE) for 45 minutes. The moment that happened everyone started pointing fingers at the date — Friday, the 13th — as the reason for the doom.

So, what is so bad about Friday, the 13th. One reason is the Last Supper, which was attended by 13 people — Jesus Christ and his 12 disciples. The supper (supposedly) happened on Thursday evening — and still the blame is on Friday. On Friday, which is called the Good Friday, Roman soldiers crucified Christ.

For India, though, the connection is closer. Remember what happened on March 12 in 1993? A series of 12 bombs exploded one after the other in Mumbai (then Bombay). The first blast happened at BSE. Trading remained suspended for the rest of the day. Together, over 300 people died in the blasts.

But even before that on October 13, 1989, a mini-crash shook the world. The crash came to be called as the Black Friday. The crash had a global impact and billions of dollars were lost collectively by people.

If you try to join all the dots — only if — you’ll know there are too many holes in the theory trying to taint Friday, the 13th. The markets had been in a free fall for the past two-three days, why single out Friday? Maybe because singling out one day gives us the relief that if we sail through this one unlucky day, we will do well on all others. Sorry to disappoint, but there is no such guarantee.

From people to stock markets to sporting events, there is nothing, literally nothing, that doesn’t seem to have been hit by the virus. It has ‘even’ forced Board of Control for Cricket in India (BCCI) to postpone the IPL.

We highlighted the word ‘even’ because BCCI till the very last moment dithered from announcing the decision. They even considered the option of holding the matches without spectators.

What the hell is a match without spectators? Well, it is still a match. You may think spectators are very important and all (and they are from the economic angle) but then, you see, nobody is indispensable.

In fact, this wouldn’t have been the first time that a cricket match would have been held without spectators. It has happened before too. It happened in 1999 during a Test match in the Asian Test Championship.

The first three days passed peacefully and India appeared to be on the way to a memorable victory as Pakistan were 26 for 6 on the first morning. In the first inning, Sachin Tendulkar was bowled out for a duck by Shoaib Akhtar. 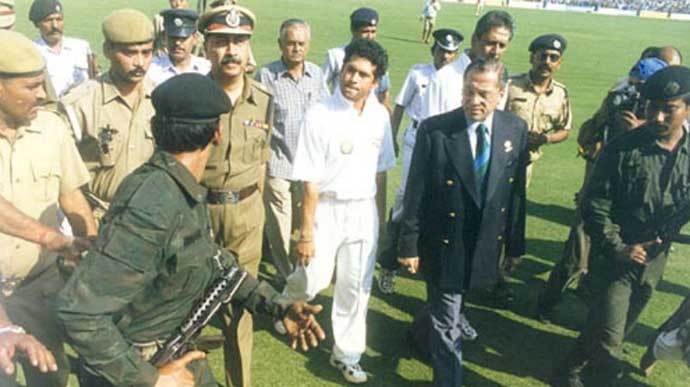 Sachin Tendulkar along with security officials during the Asian Test Championship. (Photo: Twitter)

When it came to the second inning, Sachin was on seven when he hit Wasim Akram to deep midwicket. The Little Master took two runs and was on his way to take the third one when he collided with Akhtar. By then Nadeem Khan hit the stumps from the deep.

The umpire on the ground referred the decision to the third umpire and Sachin was declared out. That’s when the spectators decided to take matters in their own hands. The crowds got unruly because give the crowd an opportunity to get unruly and it will. And when a crowd feels wronged, there is no hope in hell for sense to prevail.

So, the organisers had to get all spectators out of the ground and the match was completed — and Pakistan won it.

That was then. We wonder even if an India-Pakistan match is to be held today, will people turn out to watch. We suggest turn on your TV and watch. But for now, you can’t because no match is being organised. Not at least till April 15.

We understand these are difficult times but it is time, it passes.