Covid-19: How the 21-day lockdown can be a turning point for India

There is more to the 21-day national lockdown than meets the eye. It has bought the government a three-week window to get its act together.

As the world struggles with the coronavirus pandemic, the country coming in for maximum negative coverage — barring China — is perhaps India.

However, from all accounts, the advanced nations of the West are faring no better than the lesser-accomplished ones. There are disconcerting reports, both from the USA and the UK, of doctors considering "universal do-not-resuscitate order" for Covid-19 patients. In Italy, one hears the medical system is so overwhelmed with a shortage of ICU facilities and critical equipment as ventilators, that they are not able to treat all patients. The biggest casualty being senior citizens, who are also the most vulnerable to contracting the infection.

The criticism about India is, not unexpectedly, largely from domestic quarters. With a slight difference that many of the voices — though of Indian origin — are emanating across the pay-walls of international media. India has received flak for an allegedly unplanned countrywide lockdown throwing millions of poor migrant workers to fend for themselves. Government has been held responsible for a shortage of PPEs, masks and testing kits. Low reported numbers of Covid-19 positive cases was attributed to inadequate testing. Claims of community transmission held in check have been debunked, questioning the sanctity of data. Entirely inappropriate parallels have been drawn with South Korea and Singapore, which are both smaller in size, with far higher per capita GDP and a more disciplined population to boot. It is another matter that these countries have slipped back into regression on the Covid-19 recovery graph.

Finally, the two "events" of Janata Curfew and 9-pm-9-minutes lights out and candle vigil has been cynically dismissed as theatrics at best and superstition at worst. However, a slightly more objective analysis would indicate that we are, arguably, being less than charitable towards the Indian government. 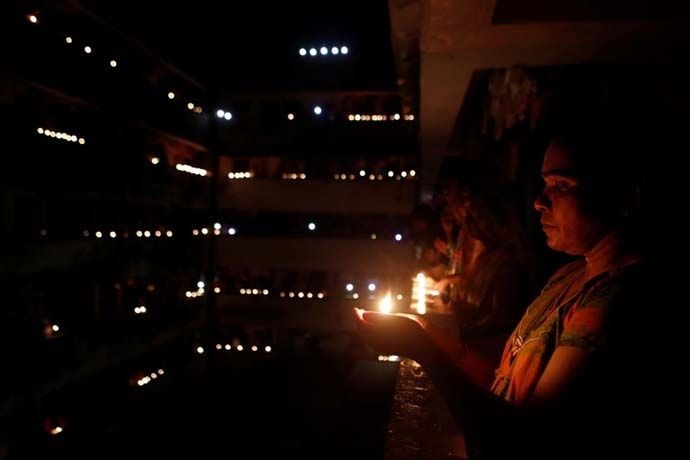 People in Mumbai respond to PM Modi's appeal and light candles on April 5 to mark the fight against coronavirus. (Photo: Reuters)

With the United States, with a population of 330 million floundering, one cannot even begin to imagine the scale and complexities for a country like India that has four times the population (1.3 billion) and one-third its size. In comparison, India's response to Covid-19 has been commendable. The government has been moving as per a plan — keeping in mind its internal realities and constraints. Though not immediately apparent to the common man, it should not be difficult for the informed gentry to figure out that the government has been moving along a well-calibrated plan.

It is nobody's case that India has crossed the hump. It has a long haul ahead with hazards and pitfalls at every step. No one realises this better than the government. It would be naïve to think that administration in Delhi and the states are incompetent and insensitive. Not only the Prime Minister, but leaders of all major political parties — except perhaps the Congress and a few of its allies in the wilderness — understand their future is intricately linked to the handling of this crisis. As far as Narendra Modi goes, India has not had a more politically astute leader in a long time. He knows this is a make-or-break moment of his phenomenal career.

In any crisis management, timing is of essence. Pulling the trigger prematurely can be as counter-productive as responding late. India started with the screening at airports in February, in tandem with high-intensity communication on hand and coughing hygiene. This was followed by a sustained campaign on social distancing. In a country large enough to be called a sub-continent in itself, with varying levels of education and awareness practices, it takes a while for the message to percolate down to the lowest common denominator.

Similarly, a country-wide lockdown requires a lead time to put in place not only the administrative logistics, but also mentally prepare the population for a major disruption. But, the idea of a "Janata Curfew" was a masterstroke. It at once gave the people a sneak-peek into the coming weeks, and also co-opted the citizenry in what is likely to be a protracted battle on multiple fronts. The 'nine minutes lights out' campaign, albeit symbolic, was essential to keep the people engaged as they were getting impatient and restless.

However, there is much more to the 21-day national lockdown than meets the eye. It essentially bought the government a three-week window to get its act together. Without such a "surgical strike", it would have been impossible to clear Nizamuddin, Shaheen Bagh and other similar gatherings across the country. Without a total lockdown, there was no way to stop Ram Navami congregations. Similarly, notwithstanding the fiasco in Delhi with the migrant labourers, by and large, uncontrolled movement across the country has been brought under check.

Meanwhile, the government announced its first tranche of financial incentives for the economically weaker sections and the Reserve Bank came out with a bold set of policy measures. The impact of these steps should begin to trickle down by the time the lockdown is lifted. A country cannot remain at standstill indefinitely. The economic costs of it will be crippling. But, the toll of human displacement can be devastating for a nation that has over 30 per cent of its labour force engaged in the unorganised and informal sector, with a high component of daily wage earners. Therefore, it is just a matter of time before a phased exit plan is rolled out. But one hopes that during this interregnum, the country's readiness to combat Covid-19 would have increased manifold. Hotspots would have been identified for isolation. Sufficient hospital beds, ICUs and quarantine facilities would have been created. Testing kits, PPEs would have been procured and delivered.

Though the journey ahead will be long and arduous, these three weeks of lockdown if handled well, can be the turning point for India.

Also read: The road ahead from the lockdown

#Narendra Modi, #9baje9minutes, #Lockdown in india, #Coronavirusinindia
The views and opinions expressed in this article are those of the authors and do not necessarily reflect the official policy or position of DailyO.in or the India Today Group. The writers are solely responsible for any claims arising out of the contents of this article.