There is evidence which says China used the smallpox virus itself to 'infect' a person. But why?

It's a Wednesday. It's anyway the most boring day of the week, but what's boring and interesting in these times anyway. But today happens to be Earth Day. It is the day the world celebrates the Earth, the International Space Station tells us how beautiful this closed-for-repairs planet still looks, we say we are grateful to be on this planet, and then return to our human ways. But that's tomorrow. Today, from within our homes, we will take you to a place on Earth where no one can go to. No, it's not Area 51.

It's an island called Poveglia, just off Venice in Italy, which once served as a place to quarantine people who the Black Plague had felled. Poveglia lies off the eastern coast of northern Italy. Now, we have all seen those gondolas and gondoliers taking many a naive tourist down the Grand Canal in Venice for prices that can probably buy you the entire boat, but tourist traps are tourist traps. And there's nothing we can do about it. But boats won't take you to Poveglia. Poveglia is one of the 166 islets that dot the lagoon around Venice. The island has the reputation of being among the most haunted places on the Earth. But what's the big deal about haunted, you might ask. Well, not all ghosts are Ruskin Bond's friendly ghosts. Some drive people mad and push them to commit suicide, like what happened in Poveglia. Poveglia has the reputation of being among the most haunted places on the Earth.  (Photo: Wikimedia Commons)

So after more than 1,00,000 plague victims were piled up and their dead bodies were burnt, the island got a 'mad doctor' who tried numerous experiments, mostly torture, on mentally ill people. This doctor finally jumped off the bell tower on the island, because, according to one version, the 'ghosts of the tortured people drove him to it'. But a more believable version is that this doctor killed himself to try and absolve himself of the sins he committed. Well, finally, in 1968, the last inhabitants of the island left. And till today, Poveglia remains uninhabited.

Poveglia also served as a checkpoint for ships trying to enter Venice in 1777. But in the 1790s, when two ships were found to have infected people, this island became a quarantine centre all over again. Sounds a little too familiar to our situation at the moment, right? Well, at least we don't have those infamous Plague Doctors anymore, and thank the advances of science for that.

The advances of science bring us to the current day. We are fighting another pandemic. And human trials of a potential Covid-19 vaccine are to take place in the UK tomorrow. Now we all know from Class 6 Biology classes that Edward Jenner was the first person to develop a vaccine. Did that mean there were no vaccines before May 1796? There were, but technically not vaccines if you were to look at the word vaccine. The word originated from vacca, Latin for 'cow', because Jenner used the cowpox virus to make his vaccine for smallpox (it was also our Word Of The Day last month). But all of this happened several centuries after China already had a sort-of vaccination system in place. 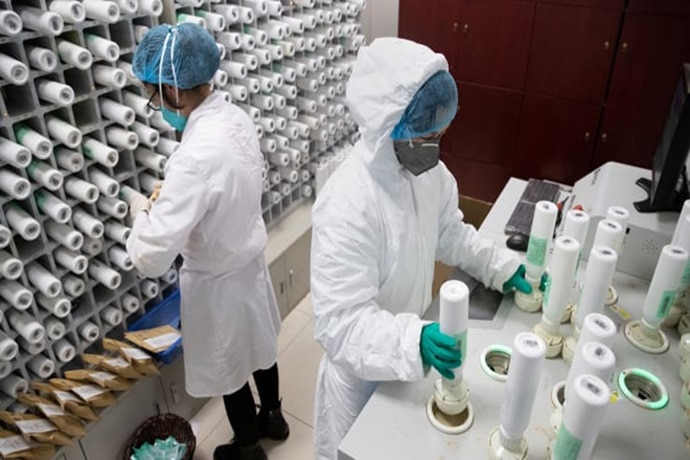 Human trials of a potential Covid-19 vaccine are to take place in the UK tomorrow. (Photo: Reuters)

In the 1000 CE (AD), that's about 800 years before Edward Jenner, China had something called 'variolation' ('variola' is Latin for smallpox) in place. This is basically inoculation. There is evidence which says that China used the smallpox virus itself to 'infect' a person. This variolation took place by taking smallpox scabs or pus from a patient and either rubbing them on superficial wounds on a healthy person's body, or by blowing powdered scabs up the person's nose. Yes, that is giving us the heebeegeebees already.

While China got the inoculation right for smallpox, it is yet to develop one for Covid-19, the disease that originated in the country. We are not sure if China has developed a vaccine already and is unwilling to let the world know. China is China. Expecting any sort of transparency from them is tougher than trying to get into the Queen's bedroom. Unless you are Michael Fagan.

Now there are intruders and there are intruders who get their own Wikipedia pages. Michael Fagan is the latter category. All Fagan did earned himself a place in the worst security breaches of the 20th century. What happened? At 7 am on July 9, 1982, Fagan scaled the 14-foot high wall around the Buckingham Palace, climbed up a drainpipe, and entered the palace. He then got into the Queen's bedroom, and all of it, because of an apparent bet with his friends! Till date, Fagan remains the only civilian to get into the Queen's bedroom. In all these decades of her monarchy.

Queen Elizabeth II celebrated her 94th birthday yesterday. Well, not 'celebrated' in the way her birthday celebrations usually are, given that she too is isolated with Prince Philip thanks to the coronavirus. This virus doesn't leave anyone. It infected Prince Charles, sent UK's Prime Minister to the ICU, and has now made his Pakistan counterpart take a test. Imran Khan met Edhi Foundation chairman Faisal Edhi, who tested positive. So Khan too had to take a test; grudgingly, we guess.

On this side of the border, the coronavirus has taken 640 lives and infected 20,000 people. Scientists are tearing their hair out trying to develop a vaccine, but it's going to take some time. For now, hospitals have already begun convalescent plasma therapy as a possible treatment. But the problem with Covid-19 is that it is so new a disease that no matter what you do, there's nothing foolproof at this point. But what exactly is this plasma in plasma therapy? Plasma, our Word Of The Day, is the clear, straw-coloured residual liquid portion of the blood after all red blood cells, white blood cells, platelets and other cellular components are removed. Plasma also has another meaning (the fourth state of matter: a gas becomes a plasma when it is heated until the atoms lose all their electrons, leaving a highly electrified collection of nuclei and free electrons). Your plasma television sets all get their name from this second meaning. But let us go back to the first.

So the plasma has antibodies which fight against a disease. When you recover, the antibodies stay on in your blood, waiting to attack the virus if it were to infect you again. When you have recovered, the antibodies in your plasma, when introduced into a patient suffering from the disease, can attack the virus in this other person and help her recover. The convalescent plasma therapy is currently being used only in severe cases, given that a vaccine is still months away.

Our battle with Covid-19 has also brought to us many covidiots and our pick for the day is this District Agriculture Officer from Bihar's Araria, Manoj Kumar. Mr Kumar, Covidiot Of The Day, was asked to show his vehicle pass. He got down, and made the homeguard do sit-ups for daring to ask him for the pass. The video has left people all over the country furious. Quite understandably. The lal batti is gone, but the lal-batti entitlement of government babus are yet to go.

Shame on you @NitishKumar and police constable in araria Bihar because he asked in agriculture Officer (manoj Kumar), to show the pass while checking the car this is a shocking shameful scene #Araria #BiharPolice @bihar_police #politics ???? pic.twitter.com/Z1npQ5Ceq1

After the video made national headlines, Manoj Kumar apologised. But what do you do with an apology if it is of no use to the person hurt? Maybe if an apology video goes viral on Facebook and WhatsApp, like the sit-up one did, people will see that not every babu is always right.

Facebook, along with WhatsApp, is the biggest source of 'news' in India today. Mark Zuckerberg's company has taken over India thanks to Mukesh Ambani's Jio, and now the two are business colleagues too. Facebook has bought a 9.9 per cent stake in Jio for Rs 43,574 crore. That's a figure we will leave to the Zuckerbergs and the Ambanis of the world to make sense of. But a figure that we will tell you is the number of people in India who use Facebook. In 2020, that number is 260 million. 2.6 crore of the Indian population is on Facebook. If you are one of those 2.6 crore, and are reading this on Facebook, we wish you a fake-news-free Wednesday.

Stay on Facebook if you want, but stay home.