When movies come to life in the times of coronavirus

The eerie similarities between present-day events and the plot of Contagion where a virus leads to the loss of social order has expectedly renewed interest in the nine-year-old film.

The eerie similarities between present-day events and the plot of the 2011 thriller Contagion where a virus leads to the loss of social order and how medical researchers and public health officials struggle to contain the disease, has expectedly renewed interest in the nine-year-old film. Written by Scott Z. Burns and directed by Steven Soderbergh, Contagion was lauded its multi-narrative “hyperlink cinema” style that is present in several of Soderbergh’s films, of course, but it was also commended for its medical detailing that portrayed the “successes and frustrations” of science with great accuracy.

Although there hasn't been any confirmation that Coronavirus spread due to bat soup, Contagion’s end, in some way, also retrospectively insinuates this popular supposition. In the film, a tree cut in a Chinese forest disturbs some bats, who find shelter in a pig farm where a piece of food dropped by a bat is consumed by a pig, which is later slaughtered for a meal by a chef, who shakes hands with the character, who becomes the index case, or the first documented patient of a disease epidemic. The scary charm of the film increases manifold when you notice a cameo by Dr Sanjay Gupta, an American neurosurgeon known for his many TV appearances on health-related issues, who is now speaking the same things on television in real life! 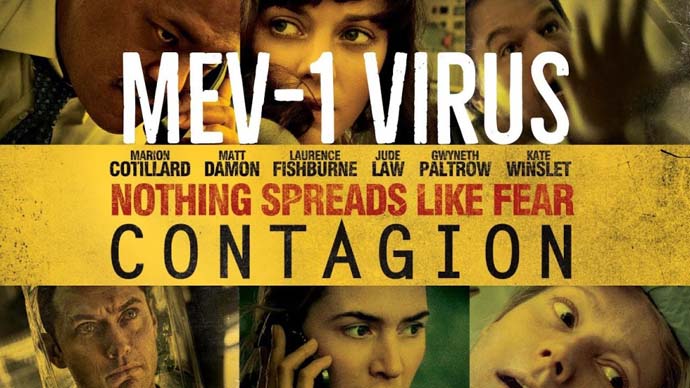 It was only a matter of time before the rediscovery of Contagion led to people binge-watch other popular doomsday and post-apocalyptic thrillers of the recent past.

It was only a matter of time before the rediscovery of Contagion led to people binge-watch other popular doomsday and post-apocalyptic thrillers of the recent past. The 21-day Lockdown announced by the government of India, where minimal contact between people could help in containing the spread of the Coronavirus in a country that houses nearly one-seventh of humanity has only aided the process. Interestingly, most top-notch films in disaster, as well as the post-apocalyptic genre, seem to have a couple of things in common. Most of them suggest a return to basics as a tool to take on the imminent threat. In Tim Burton’s spoof, Mars Attacks! (1996) the unbeatable Martians are destroyed when a Slim Whitman song, Indian Love Call their Achilles heel, is broadcast across radio stations of the world.

Lessons to be learnt

Although there aren't any noteworthy Indian films in this genre, one wouldn't be entirely mistaken to notice a strong presence of Indianness across most post-Apocalyptic movies. In the futuristic Netflix series Altered Carbon, a police squad car has 'Raksha Karna' plastered over it in Devanagari script. In The Matrix (1999), an unlikely studio-backed Hollywood movie that suggests that our world could well be an illusion, the entire narrative which centres around the state of mind of a seeker echoes the philosophy of the Bhagwad Gita. In addition to The Matrix Trilogy, scores of films in the genre often turn to popular eastern spiritual teachings.

Right from Star Wars where writer-director George Lucas often insisted that his films told an old myth in a new way, recent Christopher Nolan films Inception and Interstellar seem to revisit the Advaita Vedanta philosophy by exploring the dichotomy between illusion and reality and universal consciousness that not only transcends space and time but also connects all human life respectively. Curiously enough, all these films at a visual level depict the zenith technology, and at the same, the underlying reasoning is what one would call age-old wisdom. The best illustration of this is in James Cameron's Avatar (2009), where much like Lord Vishnu, humans take different 'avatar' or 'incarnations' to save the world. While visiting India, Cameron said that the film could well be a subconscious reference to Hindu mythology. In nearly all these films, the protagonists need to slow down and reassess their priorities and use something from the past to fight the terrors of the present to decide the course of the future.

In some ways, the situation that we find ourselves in due to the Coronavirus onslaught is also perhaps trying to suggest the same. The slowing down of life has for the first time in years allowed us to look around. In the end, it took only a couple of days to give up the fast-paced existence that we believed we couldn't do without. Sitting under lockdown, you look around and even a solitary moment between flipping channels, or refreshing the phone's screen is enough to put things in perspective. That is if we so desire.

Also read: Contagion sums up our lives in Covid-19 times

Post your comment
#Steven soderbergh, #Coronavirus pandemic, #Contagion, #Covid19
The views and opinions expressed in this article are those of the authors and do not necessarily reflect the official policy or position of DailyO.in or the India Today Group. The writers are solely responsible for any claims arising out of the contents of this article.