Aarogya Setu is similar to Chinese tracking app. For a democracy, it is too close for comfort

While the world is balancing privacy and public health even in this difficult time, the Indian government's Aarogya Setu app is emulating Chinese government's all-controlling, all-tracking system.

There are a number of countries running app-based tracking of Covid-19 infections. Singapore was one of the first out of the gates. South Korea has shown that by tracking Covid-19 patients thoroughly, it can put the genie back in the bottle and control coronavirus infections. Some European countries have their own app-based tracking of Covid-19 infections. Yet, there is something unique about the Covid-19 apps made by China and India. So far, these are the only two countries — at least the sizeable ones — that have come up with something that goes beyond Covid-19 tracking. They not only aim to track Covid-19 infections, but also aim to certify who is not infected, who is at risk and who should definitely stay home.

Several weeks after coronavirus infections spread in China, the country came out with a colour-code system. This was based on self-reporting and some opaque algorithms and it was administered through WeChat — yes, this app is everywhere in China. The colour-code system asked people to self-report travel history, location, any cold or flu-like symptoms and so on and so forth. Based on the inputs received, the system gave people a colour code: Green, Yellow and Red. Now, people who get Green are free to go to public places in China. They can ride trains, they can go shopping, they can enter commercial complexes. People who get Yellow are denied access to public places and are told to go home and stay in quarantine for 7 days. People who get Red are also denied all access and are told to stay home for at least 14 days.

The Chinese colour-code system has potential for great misuse, and more so, given that it seems to be arbitrary. It is based on some algorithms and the information people are reporting. There is no actual testing of people before they are assigned a colour.

Yet, guess who is impressed enough with the system? The Indian government. A few weeks ago, the Indian government updated its Aarogya Setu app to include a new tab called 'e-pass' in it. The feature is yet to be fully functional, but India Today reports that it is going to have colour-coded passes. The passes will be in three colours: Green, Orange, Red. The functionality is similar to what Chinese colour-coded system offers. Green will get all access, Red and Orange will be told to go home, although Orange will likely be allowed to buy essentials at a local store. Black and white, enforced through Green, Orange and Red. 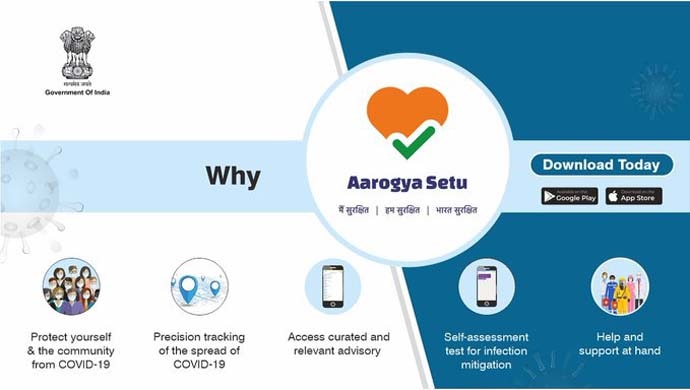 The potential for misuse is huge, and particularly so in India where rules almost seem non-existent — including the privacy protection law which is in the works for like forever — and where people tend to underestimate the hardship that opaque directives can bring. Even before the e-pass feature in Aarogya Setu has arrived, there are reports of how the app is causing pain to people.

In a way, the story seems similar to Aadhaar, which is voluntary on paper but mandatory if you want to exist in this country. Aadhaar is not to be used trivially; it doesn’t need to be shared everywhere, or so say the rules. Yet, there are housing societies, office complexes, courier services that will deny access if you do not furnish a copy of your Aadhaar. If you want to exist, you must have an Aadhaar. Forget about existing. Even if you were to die, your family would still need your Aadhar because without an Aadhar, some hospitals won't even hand them your death certificate.

Just like how it pushed Aadhaar, the Indian government is now promoting Aarogya Setu. The app is voluntary to use, but people have started receiving messages from their banks, and for that matter, this organisation and that, that they should install the Aarogya Setu app on their phones. Just a few days ago, a video went viral on social media where a man was denied access to a local chemist shop because he wouldn’t show if he had the Aarogya Setu app installed on his phone or not. Organisations like Zomato and Urban Company have mandated that their workers install Aarogya Setu and show their health status. From this point, the slope is indeed slippery. Soon consumers may also be asked to show their status on Aarogya Setu before Zomato and Urban Company offer their services.

Once the e-pass is enabled in Aarogya Setu, expect it to be a de facto pass for accessing public places in India. Already there are plans. There are reports that CISF and Delhi Metro will require passengers to show the Green pass on Aarogya Setu app if they want to take a train when the services open. As they say, what can go wrong?

At best, this system will create chaos because more than half of India’s population still doesn’t use smartphones. At worst, it will lead to a society where people can be arbitrarily denied access to public places, curtailing their physical movement. Want to buy an air ticket? Show your Aarogya Setu status. What to reserve a table at a restaurant? Show your Aarogya Setu status.

The risk is real and even more so compared to the Chinese system, because that one at least uses the information that people self-report. Aarogya Setu largely relies on parameters set by authorities, data collected by GPS and Bluetooth, and processed by opaque algorithms. The app is extremely intrusive as far as user data is concerned but on its part, doesn’t explain its privacy policy or data retention policies transparently.

There is a possibility that Covid-19-tracking apps are going to be part of the society for some time. But just like the world has learnt to manage privacy vs security, we should also learn to manage public health vs privacy. It doesn’t necessarily need to lead to a system where people lose their rights and dignity. There are better ideas that the Indian government can borrow. It doesn’t need to look at China, effectively an authoritarian country, and bring its all-controlling, all-tracking system to India, theoretically a thriving democracy.

If Covid-19 tracking is the goal, maybe the Indian government can look at what Google and Apple are doing. The two companies have created a mechanism on the iPhone and Android phones, using which the government can create Covid-19-tracking apps. Europeans are using this mechanism, including Germany which has a strong emphasis on privacy. Google and Apple have said that these are temporary measures and once the pandemic is over, they will also dismantle the mechanism they have created. This inspires confidence.

Most countries are using apps to only track coronavirus infections. They are not expanding the scope of surveillance, and they are very careful in ensuring that people still have some privacy. Just today, the top court in Israel told the government to either stop using the Covid-19 surveillance app or seek a regulatory framework for it by getting approval from the Parliament. Even in this difficult time, countries are trying to balance privacy and public health. Except China. And maybe India.

Also read: The pros and cons of Lockdown 2.0