Our communities have not gone through the drill of fighting SARS viruses and the utter lack of community health centres has made community spread impossible. To acknowledge, that is.

Aren't you proudy? Then say it. The coronavirus first emerged in China, the dictatorship with loads of cash, that did what it does to any kind of uprising. Locked people in in their homes and suppressed information. It was the first country to get out of the coronavirus crisis. India, a democracy, will be the last but not without its successes. Look at the developed countries like the US, the UK, Italy, and Spain in the neck. These countries with their supposedly superior healthcare systems have been bought down to their knees by the novel coronavirus. We are not just standing but standing proud in spite of our abysmal infrastructure and a damning density of population. Everything is going according to the plan.

We had a long, phased lockdown and unlock periods. The coronavirus was controlled and released accordingly because we had to choose between saving lives and saving the economy. Lives, we have a 1.4 billion of them; the economy, hardly any after the lockdowns. So we unlocked and since then, the coronavirus cases have been rising steadily. No nasty surprises, no hanky panky, only steadily. On Day 1, our corona committee decided to prevent community spread and wo din and aaj ka din, we do not have community transmission. Dr VK Monga of IMA declared we have community spread but that was in his personal capacity. It's not community spread unless ICMR declares it because it's the only organisation authorised to declare community transmission. ICMR, unlike Dr Monga, is acting responsibly. 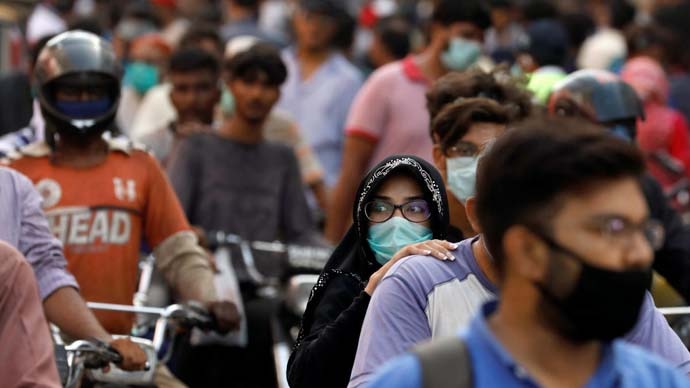 We had to choose between saving lives and saving the economy. Lives, we have a 1.4 billion of them; the economy, hardly any after the lockdowns. (Photo: Reuters)

We had an explosion of cases in Ahmedabad, Bhilwara, Jaipur, Indore, and when Mumbai took over, Delhi was quick to catch up. In the South, Bengaluru is catching up with Chennai. Kerala, being god's favourite, nearly controlled it before a second wave hit its supercilious shores. Now the virus has travelled to the hinterlands, villages, and small towns of Bihar and Uttar Pradesh, Bengal and Assam. These places are world-famous for not having basic health amenities. The virus has no cure and having super-speciality centres hasn't helped any country anyway. People have died in thousands in the developed world. Our mortality rate is still very low because we procreate furiously, keeping the supply of young people at an optimum level. A certain percentage of people have died in the best of hospitals worldwide. We will have similar numbers albeit this will be made possible by the severe lack of hospital beds in the gloriously wretched areas outside our shining metropolises and IT hubs. The overall numbers, however, indicate that we will hopefully retain the second-most populous country in the world status in spite of allowing the virus a virtually free reign.

The daring folks in large parts have not even understood the severity of the situation and that communicates a lot of our communication strategy. You make a call and you hear instructions about what not to do in corona times. These are followed to the T by people who have always known the red light at the traffic junctions means go and if the writing on the wall says Gadhe ke poot, it is an invitation for en masse irrigation of the wall. After the dead were laid next to the living in KEM Hospital in Mumbai, we saw visuals of the same from Patna's NMCH. Since coronavirus is highly infectious, the dead are left in the open for hours but the living and spreading are travelling in buses, buying their own medicines, and going about their lives until they drop right at the medical store. Because they don't know they are infecting others because they have not been tested because the government is not testing enough because there aren't enough testing kits available with the non-existing health centres in the backyards of big cities. We are a country of becauses.

South-East Asian countries have fever clinics. They have had a lot of practice in fighting SARS viruses. Masks are a habit there. We never had a SARS practice before we got SARS-CoV2. Our communities have not gone through the drill and the utter lack of community health centres has made community spread impossible. To acknowledge, that is.

Dr Monga is going by the definition of community spread. What's the definition? Well, community transmission simply means that an infection is so widespread in the community that one cannot trace and identify from whom or where a member of the community got the infection. You see, when the crisis began in January, we could identify that Ramesh got it from Suresh who came from Italy and then gave it to Savita bhabhi in Indore who passed it on to Reshma in their stitching class. So when the whole stitching class got infected, we knew Suresh is the culprit, not the Tablighi Jamaat. Tablighi Jamaat members brought it from Malaysia and infected other Tablighi Jamaat members at Nizamuddin Markaz who infected their families and we had a cluster and a communal blockbuster. Those fine days are gone now. Now, the majority of cases are untraceable and most do not have a travel history you can determine anything from. That's the textbook case of community transmission. That's why Dr Monga's derivation was dismissed. We have moved on from classical textbook definitions and have landed on a practical plain where we cannot change anything by acknowledging something. Much water has passed under the bridge and the bridge is about to collapse. Howdy, proudy?

#Coronavirus in india, #ICMR, #Covid19, #Communityspread
The views and opinions expressed in this article are those of the authors and do not necessarily reflect the official policy or position of DailyO.in or the India Today Group. The writers are solely responsible for any claims arising out of the contents of this article.