In February 2020, many experts noted that India had wisely managed to escape the doomsday predictions made for a densely populated country. Far from being complacent, PM Modi had warned states to prepare themselves for a second wave.

A pandemic happens once in many decades. It decimates large sections of the most vulnerable people across the world. Economies crash; or, at least, they take a perceptible beating. Things fall apart, as a ghoulish disease is 'loos'd upon the world'. Pandemics do not pay heed to borders and boundaries: when a virus is airborne, there is no restraining the might of its deathly trail. During a pandemic, the world's fighting back has to be executed in unison: that is the only way.

In 2020, when the coronavirus pandemic first broke out, India sent out multiple shipments of hydroxychloroquine and other medicines to the US, and to many other countries, in an act of remarkable generosity, which the world acknowledged. Later, it sent vaccines to over 90 countries and launched the world’s largest vaccination programme at home.

In February 2020, the pandemic seemed to be under control, and many experts noted that India had successfully emerged from the crisis, and wisely managed to escape the doomsday predictions made for a densely populated country. Far from being complacent, Prime Minister Modi repeatedly warned state governments to prepare themselves for a second wave. 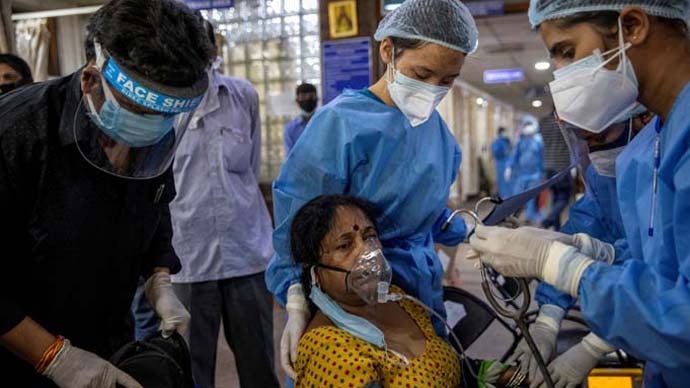 India grapples with a challenge no country has faced in history - in scale and baffling complexity. (Photo: Reuters)

Now, as a fiendish second wave rides across India, with the highest ever transmissibility and severity, India grapples with a challenge no country has faced in history - in scale and baffling complexity. As Dr Fauci has pointed out, no country in the world could have anticipated the perniciousness of the mutated strain of the coronavirus.

It is edifying that the USA, UK, Japan and other countries are providing assistance to India in its hour of need. It would be remiss to categorise these acts as mere 'repayment' to India for its initial generosity: the pandemic has united the world's populations, as well as its leaders. Well, almost.

Covid-19 brought the world's lone superpower, the United States, to its knees. Images of suffering patients in New York and other megapolises were beamed across the world, but they were never gory, never belittling and crude; and always accompanied by mandatory, gracious respect for the deceased and their families.

When you are dealing with a population four times the size of the United States, in a democratic country with a rural-urban, federal-state government, and other binaries, the sheer scale of any response and operation is daunting. The scurrilous media seems not to take cognisance of this. The other significant, and elided over, fact: the second wave of the pandemic is brutal — the virus is more belligerent in its new incarnation; symptoms are different, and the onset of mortality is rapid.

The international media has jumped on to the bandwagon with its thinly disguised Mission Civilatrice. It is open season for invective, name-calling, and newly-minted Orientalists. Xenophobic, acrimonious rhetoric, and wanton use of expletives, characterise the exchanges on Twitter and other social media.

What is it that has galvanised the western press into viciously picking on India, each day, with keeling-over help from our colonised journalists and certain enclaves of the Indian diaspora?

The international media — self-anointed experts on everything, and, most of all, on governance in India, which is infinitely complex, and challenging, at the best of times - routinely misleads the world on-ground realities in India, (which are certainly devastating at this juncture, just as they were, in the USA, and the UK, a few months ago), with grotesque and inaccurate (outdated) pictures of cremation grounds, as it encroaches upon citizen's crucial right to privacy in their hours of tragic bereavement. What is it that attracts the international media to this particular brand of voyeuristic barbarism? And opinion fetishism? Why does the western media view India, its leadership, and its Prime Minister, through the lens of a phenomenologically reduced status - and ill-concealed xenophobia - which it suo moto ascribes to them?

India has already vaccinated 170 million of its citizens (within almost the same span of time that the USA vaccinated 170 million of its citizens): this is commendable in a country of 1.4 billion. India will vaccinate the rest in the forthcoming months. The government has worked phenomenally hard to set up oxygen-manufacturing plants, procured and transported hundreds of thousands of oxygen concentrators and other essential equipment, and set up innumerable field hospitals. This time around, a few corporates have generously pitched in. Dr Devi Shetty, a world-renowned cardiac surgeon, and head of the Supreme Court of India's task force on the pandemic refutes claims that the Indian government is doing nothing: "Our government has moved heaven and earth to get the oxygen to the hospitals... If the whole country is falling sick, there's no infrastructure in the whole world that can manage."

International media reinscribes colonialism's insistence that India is barbaric, primitive, out of control, and chaotic: these are colonised Indians, and activists, for whom Europe and America are the cultures of reference: they seek assimilation, and valorisation, from their erstwhile colonial masters.

If you have nothing constructive to say or do, stop with the cavilling. Talk is cheap and superfluous. India is in the middle of the deadly second wave of a crippling pandemic: there is no room for hate, unfettered mischief, bigotry, or making hay whilst millions of Indians suffer, and many thousands die. If you can tangibly help, by organising oxygen, hospital beds, medication, and other equipment which will help save lives, do that. But if you cannot, then: Leave. India. Alone. In a pandemic, that is a moral imperative.

The compassionate and warm India which I love is one that no vile and bigoted journalists, or activists, or viruses, can ever destroy.