Doctors don't need thaalis and torchlight. Give them some dignity

Doctors, who we glorify as "incarnations of God" and bang thaalis for, are now being assaulted, spat at and even denied a decent burial.

Did you clang your plates, clap your hands or light a candle when PM Modi asked you to? And did you nod vigorously, agreeing with him when he described doctors and healthcare workers as "incarnations of God" at the frontlines of the fight against the coronavirus? If you did, then your silence now at the atrocities being faced by the doctors is nothing but hypocrisy. Because these "incarnations of God" are now being assaulted, spat at and even denied a decent burial.

When Dr Simon Hercules passed away due to Covid-19 in Chennai on Sunday, his family might have foreseen the difficulties of a life without him. But what they might not have been prepared for, are the difficulties in even burying the man who gave a new lease of life to thousands of patients.

As a neurosurgeon and the managing director of New Hope Hospital in Chennai, the 55-year-old Dr Simon was the beacon of hope for many. He was treating patients until late March and started exhibiting symptoms of Covid-19 in early April, ostensibly contracted from one of the many patients who he was treating. His colleague, Dr Bhagyaraj, said in an interview to the media that when Dr Simon’s body was released to his family and they approached the burial ground, they were encountered by a crowd of about 50 people who were armed with sticks and stones. The reason? They did not want to allow Dr Simon’s body to be buried in the neighbourhood for the fear that this could lead to the spread of the virus. Dr Simon, who dignified his profession till his very end, was denied that dignity in death. The group of family members, close friends who were also doctors, and the corporation officials were forced to flee, leaving Dr Simon’s body behind. In the end, orthopaedic surgeon and Dr Simon’s long-time friend Dr K Pradeep Kumar, and two ambulance drivers managed to retrieve the body and buried it in the dead of the night, covering his body with mud with their bare hands.

It is not an isolated incident.

If Dr Simon was not given a place to rest after death, doctors fighting the pandemic alive in Delhi are being evicted from their houses. A very fed-up Resident Doctors’ Association (RDA) of the All India Institute of Medical Sciences (AIIMS) wrote earlier this month to Home Minister Amit Shah requesting action against the landlords who were denying accommodation to doctors. 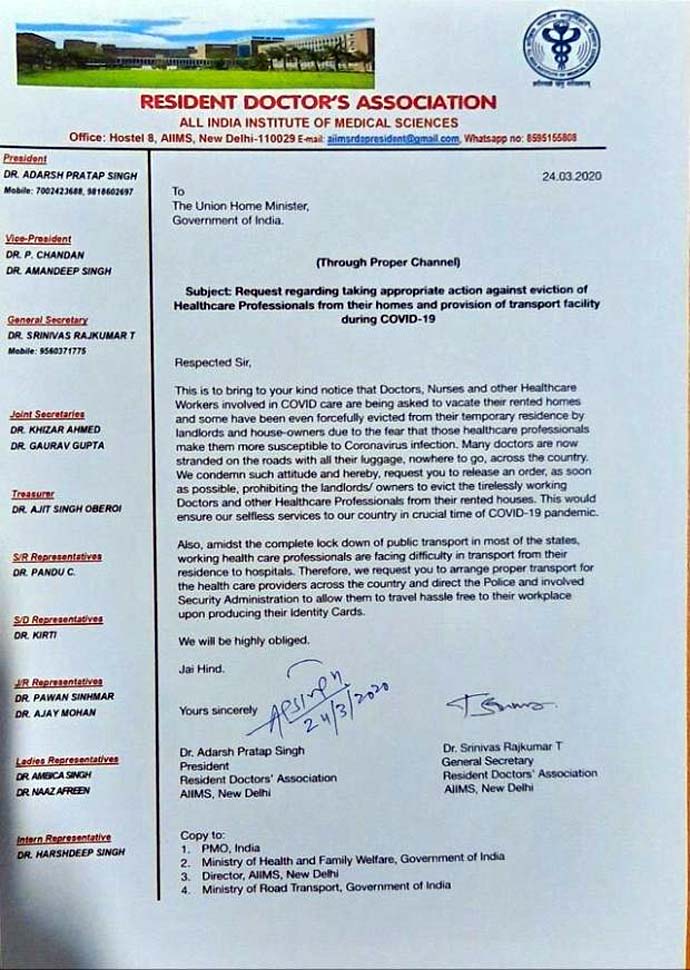 Earlier this month, a woman doctor in Surat was physically threatened and verbally abused by her next-door neighbour. The same unfounded belief — her presence would spread Covid-19 in the neighbourhood — was behind this too. Days later, two women resident doctors of Safdarjung Hospital in Delhi were assaulted by a 42-year-old man who accused them of spreading Covid-19 in the area.

And then there are the know-it-all Residents Welfare Associations (RWAs), who seem to think that they always act in the best interests of the people living in the neighbourhood. But as someone wise once said, the road to hell is paved with good intentions.

An RWA in Noida, Uttar Pradesh, decided to lock the residents up in the societies, because, well that was the best way to prevent the spread, right? They forgot that the residents also included the doctors, whose work right now is probably on top of the list of essential service providers, and that they had to go attend to patients. Doctors in the society claim that their calls to 112 (the emergency number) went unanswered after the RWA refused to open the society gates for them to commute to work.

Case after case, it is the same story repeating itself: The irrational fear that has led to discrimination, stigmatisation and harassment of the people who we rush to the minute our body inconveniences us.

This goes beyond the 'acceptable' realm of harassment that includes eviction, manhandling, abusing and being denied a burial space. A Covid-19 positive person spat at a nurse in the isolation ward. This was at MGM Hospital in Tiruchirappalli, Tamil Nadu ten days ago. The patient’s grouse was that after testing positive, he was being held forcibly at the hospital by the authorities. At a hospital in Ghaziabad in UP, some of the quarantined attendees were reportedly walking naked in the hospital ward and harassing women doctors and nurses, asking for cigarettes and tobacco.

If the mishandling by the public was not enough, doctors have been facing apathy at the hands of their own kin and hospital management too. Doctors on the ground have been voicing for long that they were not being supplied with enough Personal Protective Equipment (PPEs) like masks, gloves, gowns, eyewear and other paraphernalia even in government hospitals. However, they were met with a harsh backlash for voicing it out in the public domain. This time, at the hands of the management of their respective hospitals for raising very legitimate concerns. A doctor wearing a torn raincoat as PPE stands at the major Covid-19 treatment facility in Kolkata on March 26, 2020. (Photo: Reuters)

The situation in hospitals in India is not exactly great. Not that their counterparts in the West are faring any better.

A friend, who is a pulmonologist at a government hospital, has gone to the extent of trying to find alternate arrangements for her dependent family. She fears that she is most likely to contract the virus from the patients, and with not enough PPEs, she will lose the battle to Covid-19. If not the virus, the societal stigma and the hostility of those she treats are always there to do the job.

The Indian Medical Association (IMA) had demanded that an ordinance be passed to protect doctors from violence. Earlier, Dr Rajan Sharma, national president of the IMA said that doctors and hospitals will send out a ‘white alert’ on April 22 by lighting a candle as a mark of protest and then observe ‘Black Day’ on April 23. However, the body withdrew its protest after meeting with Home Minister Amit Shah and Health Minister Dr Harsh Vardhan on April 21. Amit Shah has assured them that their safety and dignity is non-negotiable. Rightly so. After all, you can't blame the doctors to be disgruntled after what they are going through despite risking their lives for their patients.

Safety and dignity of our doctors at their work place is non-negotiable. It is our collective responsibility to ensure conducive atmosphere for them at all times.I have assured doctors that Modi govt is committed to their cause and appealed to reconsider their proposed protest. pic.twitter.com/AJcxghGRkx

The bottomline remains the question of dignity. Thaali bajao ya diya jalao, nothing is going to be enough until we ensure protection - and respect - for those who protect us. And it is not up to the government alone. It is up to each one of us who has ever benefitted from the services of a doctor. That is the very least of our gratitude that they deserve.

Also read: Assault on doctors is reflective of an ailing Indian healthcare system

#Pm speech, #Doctors Assault, #Coronavirus in india, #Covid-19
The views and opinions expressed in this article are those of the authors and do not necessarily reflect the official policy or position of DailyO.in or the India Today Group. The writers are solely responsible for any claims arising out of the contents of this article.