With 31 cases testing positive for Covid-19 in India and a new case coming up almost every day in the past week, the infection is spreading faster than you think.

Covid-19 has spread to 86 countries across the world, infecting over 98,000 people and killing over 3,300 globally as of Friday afternoon. In India, that number is 31, with the latest confirmation coming in just this morning, in a person from Delhi's Uttam Nagar.

Here's a lowdown on all the 31 cases in India and their current status:

Friday, March 6: The latest one to be tested positive for this novel coronavirus is a person from Delhi's Uttam Nagar, who has been kept under observation. The man in Uttam Nagar had reportedly travelled to Thailand and Malaysia recently. He is in quarantine as of now.

Thursday, March 5: A man in the National Capital Region’s Ghaziabad area had tested positive and was placed in quarantine. According to media reports, the man had recently travelled to Iran.

Wednesday, March 4: A man employed with Paytm in Gurugram tested positive for Covid-19. In a statement, Paytm said, “One of our colleagues based out of Gurgaon office, who recently returned from Italy has sadly been tested positive for Coronavirus. He is receiving appropriate treatment. As a precautionary measure, we have suggested his team members to get health tests done immediately.” He is being treated at the Safdarjung hospital in the capital. Students attend a coronavirus awareness campaign at a school in Kolkata. (Photo: Reuters)

Monday, March 2: Four people reportedly tested positive for the coronavirus. Of these, one is a 24-year-old Hyderabad-based software engineer who was working in Bengaluru. He was reportedly suffering from cold and fever and had gone for treatment at Apollo Hospitals in Hyderabad as an outpatient for over a week. Subsequently, he was referred to the government-run Gandhi Hospital on Sunday and was diagnosed with Covid-19 on Monday, and is still undergoing treatment there. According to the reports, he had recently travelled to Dubai.

The Karnataka health officials refused to divulge the name of the company which the engineer works for to avoid panic. 80 people who were in contact with the engineer, including fellow bus passengers from Bangalore, were tracked down by the government and placed under watch. “We will keep them under observation and shift them to a quarantine facility if required,” Dr Prakash Kumar BG, joint director, monitoring communicable diseases in the state reportedly said. 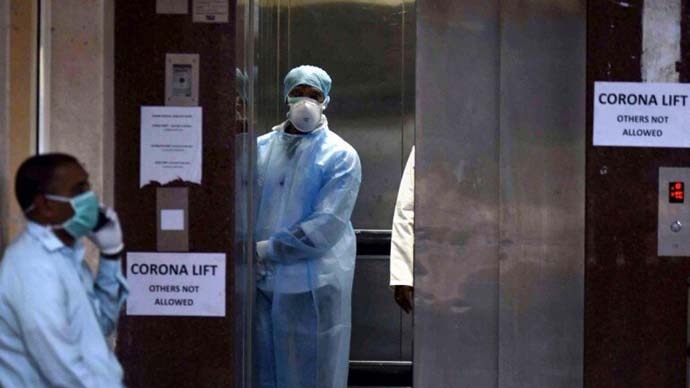 The authorities are taking no chances and are having designated lifts and access facilities at hospitals for coronavirus patients. (Photo: PTI)

The other person is a 45-year-old man and a resident of Mayur Vihar in Delhi. He has travel history from Italy. He flew to Delhi on a flight from Vienna, the passengers and crew members of which have also been notified of the case. The man’s two children study in a school in Noida, and he had hosted a birthday party with his children three days before being diagnosed positive. Following this, there was a scare of other children contracting the disease, and the school was temporarily shut to prevent the spread of the infection. 40-odd children were examined and all of them tested negative for Covid-19.

However, the man had also visited his family in Agra before being diagnosed, and six of his family members whom he met in Agra have tested positive, and are now quarantined at Safdarjung hospital in Delhi.

14 other Italians and an Indian driver, who was in the same group as the affected Italian couple, also tested positive for the virus, according to the Health Ministry. The information from the ministry further confirmed that the foreigners are being treated at a private hospital in Gurgaon, while the Indian has been transferred to the Safdarjung hospital.

February 2 and 3: The second and third cases from India were respectively confirmed last month — all in Kerala. Both of them have since recovered from the infection and have been discharged from the hospital.

January 29: The country's first case was confirmed in a student who had returned from Wuhan University to Kerala. In an interview to India Today, the 20-year-old student said that she landed in India from Wuhan on January 24 and was asked to go home after testing negative for coronavirus. On January 27, however, she informed the authorities after noticing an uneasiness in her throat. On January 29, her samples tested positive for coronavirus. She was later discharged from hospital and asked to undergo 14 days of home-quarantine. The student has recovered, her home-quarantine period is over, and she is now waiting to go back to Wuhan once the situation is better.

The Indian government is taking no chances with this outbreak, and has decided to screen all passengers entering the country from abroad for the deadly virus. Earlier, only passengers coming from China, Hong Kong, Japan, South Korea, Thailand, Singapore, Nepal, Indonesia, Vietnam, and Malaysia were being checked.

Health Minister Harsh Vardhan has said the government is also setting up additional laboratories where the confirmation test can be performed. Of these, 15 labs are already functional, and in the next phase, 19 new labs will be set up.

Also read: What to do if you cannot avoid travelling this coronavirus season

#Wuhanflu, #Italiantourist, #Paytm, #Coronavirusinindia
The views and opinions expressed in this article are those of the authors and do not necessarily reflect the official policy or position of DailyO.in or the India Today Group. The writers are solely responsible for any claims arising out of the contents of this article.