Tableeghis need compassion in this crisis, not FIR

If the courts have sought compassion, governments shouldn’t cross those limits.

A day after the Jammu and Kashmir High Court came to the rescue of 400 pilgrims stranded at Mata Vaishno Devi shrine in the region, in New Delhi, a case was registered against the preacher and his aides who organised the Tablighi Jamaat congregation in Basti Nizamuddin, violating government orders and exposing many to the deadly coronavirus.

On March 31, Maulana Saad and others members of the Tablighi Jamaat were booked under the Epidemic Disease Act, 1897 and relevant sections of the Indian Penal Code for alleged violation of government directions given to the management of Markaz in Basti Nizamuddin regarding restrictions for prevention, and treatment of the Covid-19 infection.

Over 2,000 delegates, including those from Indonesia and Malaysia, had attended the Tablighi Jamaat congregation at Nizamuddin West from March 1 to 15. In Delhi, at least 24 people who participated in the event have tested positive for Covid-19.

As per the Delhi Chief Minister, Arvind Kejriwal, at least 441 of the 1,500 odd missionaries evacuated from the Markaz were symptomatic of Covid-19 and have been sent to the hospital for testing, while the others have been quarantined. Kejriwal had been keen on getting the FIR registered. 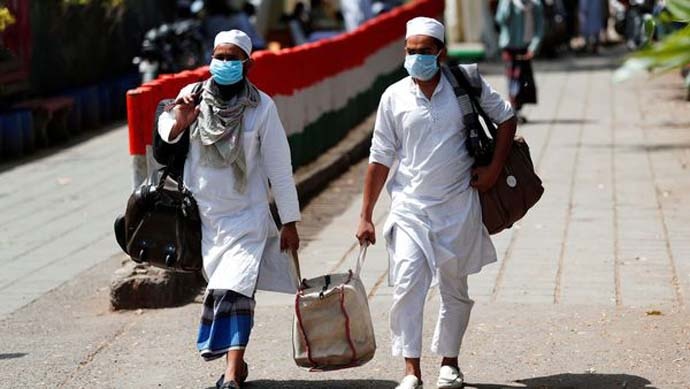 Men walk to board a bus that will take them to a quarantine facility, amid concerns about the spread of Covid-19 in Nizamuddin area of New Delhi. (Photo: Reuters)

Well, the spread of such a deadly disease is a serious issue. But no sane person is expected to intentionally carry the infection along, only to make congregational arrangements for spreading it.

To me, those stranded at the Mata Vaishno Devi hill shrine look no different than those at Basti Nizamuddin except that some of the Tableeghi men have tested positive in the national capital. And, what if, god forbid, some devotee stranded at the Katra shrine also tests positive?

In a secular country like India with millions harbouring strong religious beliefs, handling religion has never been that easy. From the Sabarimala temple where women still fight for their “right” to worship, to Triple Talaq, such controversies often await nationwide consensus, despite legal interventions.

Devotees stranded at the Nizamuddin Markaz shouldn’t be treated any differently from those stuck in the Katra town of Jammu province. Well, actually, for that matter, the lockdown in J&K started on March 18, almost a week before Prime Minister Narendra Modi called for a nationwide lockdown from March 25 midnight.

From Basti Nizamuddin to Vaishno Devi, it’s largely an issue of faith coupled with governance in such sensitive times.

On March 30, the J&K High Court directed the Union Territory authorities to ensure that pilgrims from Bihar, stranded at the shrine on the Trikuta hills, are not vacated and are provided with adequate facilities during the nationwide lockdown.

In these testing times, even the Supreme Court is seemingly prioritising the role of religious leaders over-policing. Incidentally, on the very same day, when the FIR was filed against the Nizamuddin centre, the Supreme Court pronounced a food for thought. Observing that “panic will destroy more lives than the virus”, the Supreme Court asked the Centre to provide counselling to migrants who have hit the roads to return to their native villages, and rope in community leaders of all faiths to calm them down. So, in times of crises, “community leaders of all faiths” do have a role. If the courts have sought compassion, governments shouldn’t cross those limits.

The corona pandemic wants us all to be in isolation but not divided. Divisive forces, including some news channels, are racing to link even coronavirus with religion. Hope better sense prevails.

Also read: CORONICLES: Kashmir has seen many lockdowns, but this one beats them all