Happy New Year: Why Corona may not follow the Gregorian or even the Chinese calendar

In the nine months since its outbreak, Covid-19 has challenged many paradigms and blown quite a few myths.

As 2020 came to a close, the world was waiting to heave a collective sigh of relief at a terrible year that had gone by. One sensed the anticipation of “acche din” returning in the public mood. A spirit of hope inveigled its way into the global psyche. There was a subliminal belief that the gong at the stroke of midnight on December 31, 2020, will herald the end of the corona. Whether the source of this confidence was the release of the vaccine or the imminent installation of Joe Biden as the 46th President of the United States of America was hard to tell.

There is an old joke about a dog-owner trying to reassure a guest: “Barking dogs don’t bite.” The mortally terrified visitor tells him, “I know the proverb, you know the proverb. But does the dog know the proverb?” The same may be said of the coronavirus.

There is nothing so far to indicate that the virus was following the Gregorian calendar. Although it surfaced around the previous Chinese New Year, there is nothing to indicate Covid-19 is a Rat and will run away when the Ox enters the scene next year. If anything, the advent of new strains raises the scary spectre of the Rat being transformed into an Ox.

Without doubt, 2020 has been a terrible year that all of us would like to forget but cannot. Like Lady Macbeth’s perfumes of Arabia, no amount of “Go Corona Go” or “No Corona No” will be able to erase it from the collective memory of mankind. No amount of whitewashing things that Covid-19 taught us will be able to hide the damages. 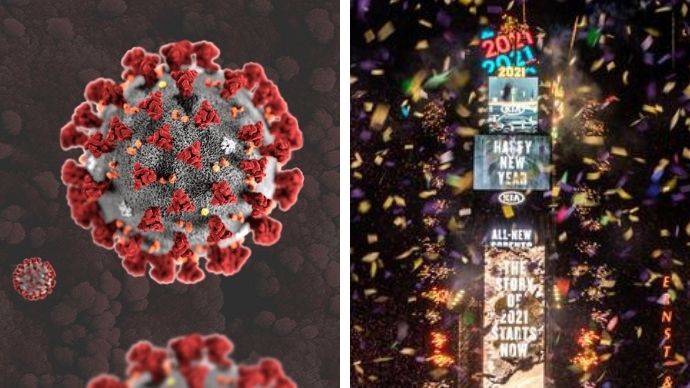 There is nothing so far to indicate that the virus was following the Gregorian calendar. (Photo: Reuters)

However, coming to think of it, the ones who have been ranting the most about the pandemic have suffered the least. Even those who tested positive after contracting the virus have lived to tell their tales. People have discovered new virtues in working from home. Reams have been written about how families have come closer and couples have found love again. The chatterati have waxed eloquent about the value of relationships in this age of nuclear existence.

Counterintuitive as it may sound, some have in fact thrived in the crisis. Admittedly, we belong to a relatively privileged lot. But, looking around, we do not see too many people close to us whose lives have been uprooted. Unfortunately, those who suffered real losses and whose lives have changed forever do not inhabit the world of Twitter or get to write op-eds. Contrary to the popular narrative, they have learnt at a high cost that in such a catastrophe, you are pretty much on your own.

In the nine months since its outbreak, Covid-19 has challenged many paradigms and blown quite a few myths. Probably, the most short-lived cliché in history has been the term “new normal”. The world learnt in no time that there will be nothing ‘normal’ in the ‘new normal’ anymore. Covid-19 has taken predictability out of our lives. Every single projection — be it about the trajectory of the virus or its impact on the economy — has gone awry. At each turn, Covid-19 has made clear that it has a mind of its own or, more likely, no mind at all. The new kid on the block is the mutated strain that surfaced in the United Kingdom.

By the end of the year, the prophets morphed into post-mortem experts. But, retrofit theories developed by hindsight are as leaky as their original predictions. The consensus is missing on what worked and what did not. Countries that appeared to have managed the crisis well so far are slipping back into the danger zone without warning. Though all hopes are being pinned on the vaccine, its efficacy is yet to be conclusively proven. Also, there is no guarantee that it will be able to take on the evolving avatars of Corona.

Having said that, it would be unfair to paint a picture of gloom and doom for 2021. The lessons of 2020 should not only have made us future-ready but also trained us to spot opportunities on the horizon or the proverbial silver lining in the clouds. First of all, 2020 made everyone — from governments, organisations to the individuals — realise that this is not a passing phenomenon. Like other scourges in history, humanity will surely triumph over Covid-19. But, the world will remain vulnerable to such biological calamities in times to come.

As per one estimate, around 83 million people were infected by Covid-19 around the world. Of these, over 58 million have recovered and another 23 odd million are under remission. Total deaths reported is just below two million, which is about 2.2 per cent. Though the loss of life cannot be measured in percentages, it may be said that the economic ramifications of Covid-19 have been disproportionately higher and widespread than the pandemic itself. This was, perhaps, not the case for earlier epidemics such as the Plague or Spanish Flu of 1918. That was because, on the one hand, while medical science was far less developed, on the other, the world was less connected then, unlike today when we are more economically interdependent.

As we enter 2021, our emergency response system has improved exponentially. Medical and healthcare facilities have been scaled up across the board. But, most importantly, technology has made us more flexible and enabled us to adjust as per the situation.

Hopefully, we shall emerge from the apocalypse much more resilient — emotionally, professionally and physically, and having leap-frogged a few more steps on Darwin’s ladder of survival.

There is another Covid-19 cliché in vogue: “Pause and Reset”. Going forward, we may have to press the “Reset” button more frequently, always expecting the unexpected.

January 1 was one such day of ‘Reset’ and restart.

Also Read: How states must shift their focus from Lockdown to Unlock to restart the economy