Winning the war against coronavirus... from home

All we have to do to win this war is watch the free TV, eat the delivered food, read to our children, sanitise and stay in. Impossible for us undisciplined Parisians addicted to being outside.

When did hand-sanitisers become weapons of war? Yesterday, the biggest luxury conglomerate, LVMH, announced that its perfume factories are manufacturing sanitisers in bulk and giving it to the government and hospitals for free. That’s when it sunk in – the country, nay the privileged Western world, is at war and everyone, especially the big old bastions of that privilege, have to do their part, or we won’t make it through to the other side.

It started with a cancelled dinner party and a witty joke about serving toilet paper as a delicacy. President Emmanuel Macron addressed the nation that evening and announced the closure of schools indefinitely. He sounded grave, but kids across France leapt for joy, imagining the fun they were about to have. It’s Day 2 of the official lockdown here in France and I am sure, those same kids (and their parents) are desperate to go back to school. 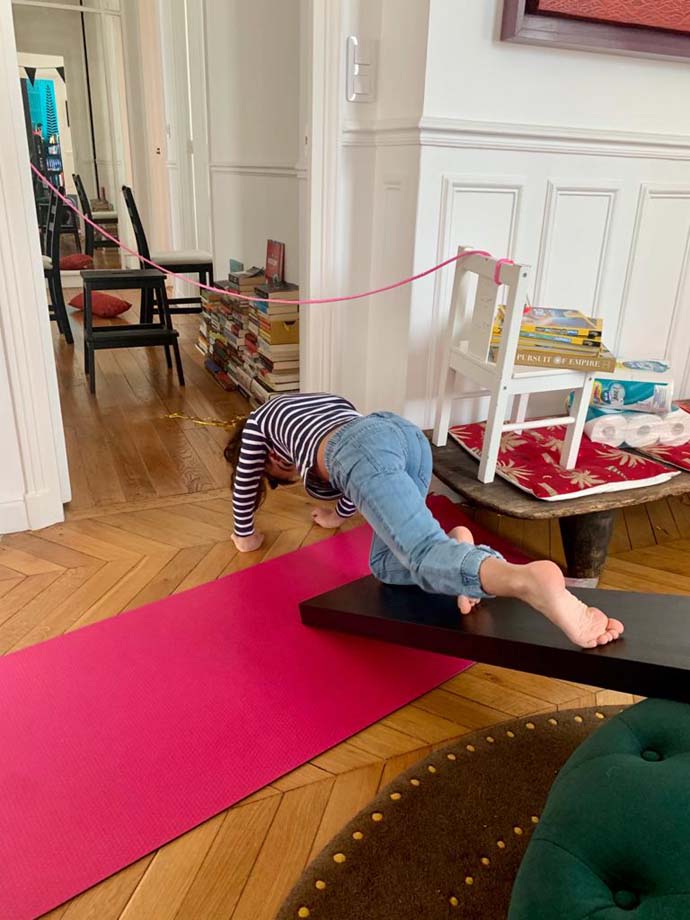 To get rid of the guilt of not using this boon of time to produce my masterpiece, I’ve turned our apartment into an elaborate obstacle course. (Photo: Koel Purie)

Unless you live it, you have no understanding of what confinement can do to you. I don’t mean the kind where you use your discretion to self-isolate, still, go meet friends when bored and get your personal trainer to come home instead of going to the gym. I’m talking about the kind when your President addresses the nation a second time, in as many days and declares, “Nous sommes en guerre” (We are at war). And that war is not being fought by trained men at a safely distant frontier, but right outside (or perhaps even inside) your four walls. An invisible enemy, armed with its own conspiracy theories and racist jargon, that only you and I can defeat, but you and I could be hosting it without even knowing.

My Parisian friends panned Macron and his speech, for talking about the municipal elections before the pandemic (but they wouldn’t be Parisian if they didn’t complain). For me, despite my limited French, the moment was awe-inspiring. My family of three rushed through dinner, to tune in, seconds before the young leader came on TV. Thirty-five million others did the same. It reminded me of the old days when a family grouped together in front of the box at an appointed hour – as the only source of information.

With all the home-made news doing the rounds, I wanted to hear the truth from the horse’s mouth, or more precisely, from the man who had the power to control our lives. Though he dismissed the necessity for face masks (because there simply aren’t enough), Macron embodied every bit a President at war; and don’t all war-presidents downplay shortages? He spoke to us like a leader, leading his troops through a deadly battle. More Winston Churchill during the Second World War, than Bush after 9/11. He was sombre, powerful and urgent, repeating “we are at war” several times, asking for sacrifice and solidarity and proclaiming the virus has no passport. He firmly listed the do’s and don’ts, reassured businesses and the self-employed with a promise of government aid (official promises in France are hard to break), suspended electricity, gas and water bills and announced the opening of an army camp hospital near Alsace. Then he made the most feared announcement – stay in, or you will be punished. All we have to do to win this war is watch the free TV, eat the delivered food, read to our children, sanitise and stay in. Impossible for us undisciplined Parisians addicted to being outside. (Photo: Koel Purie)

Being Indian, I don’t panic easily about disease and war, but following rules is a whole other matter. First thing I did, like all good hoarders, is hoard – not toilet paper (I’m Indian, I’ve other tricks), but groceries to last me, at least, forever. Canal Plus and Orange announced free cable for all, the supermarkets dropped their delivery charge, the schools set up e-learning and LVMH produced weapons of mass destruction – all pulling together for their country in this weirdest of wars. All we have to do to win this war is watch the free TV, eat the delivered food, read to our children, sanitise and stay in. Impossible for us undisciplined Parisians addicted to being outside. It is understandable, we all live in apartments and not sprawling houses with gardens. I’m lucky to have a big apartment by Paris standards, but as I asked my nanny to stay safe in her home till the government changes the order (or we die from OD-ing on online tips on how to survive), I wondered how she would cope in her small studio, with a tiny window. How are we all going to cope? I can’t remember the last time my husband and I had spent four consecutive nights (apart from holidays) sleeping on the same bed, leave alone being in the same house endlessly.

This is a strange staycation — will we use it to get through all those little admin chores we’ve shoved into a drawer for years and Marie Kondo our lives to arrive at what, where and how we really want to live? What our priorities are? What they should be? Use this forced seclusion to hit the (by now infamous) “reset” button that everyone on social media is harping on about. Or will we realise that our modern-day marriage only works when we live together on real vacations, while happily playing tag the rest of the time? Apparently, there has been a surge in divorces in China since the Corona confinements, but, no doubt, nine months from now there will also be a baby boom.

For now, three of us embrace being under the same roof by carving out our own private spaces of refuge. Routine and chocolate have become sacrosanct for our sanity. To get rid of the guilt of not using this boon of time to produce my masterpiece, I turned our apartment into an elaborate obstacle course on Day 2. Mainly, to avoid guilt from the chocolate calories. Now, can everyone shut up already about using this crisis to redefine their lives and please stop sending movie and book recommendations? I am too busy washing then moisturising my hands, on repeat; I have a war to win here.

Also read: How I fell in love with the romantic story of French president Emmanuel Macron and wife Brigitte

#Emmanuel Macron, #France, #Paris, #Coronavirus pandemic
The views and opinions expressed in this article are those of the authors and do not necessarily reflect the official policy or position of DailyO.in or the India Today Group. The writers are solely responsible for any claims arising out of the contents of this article.