DailyOh! Open the window to let Covid out, get a Covishield jab before your flight

A govt advisory says that well-ventilated spaces dilute the viral load of infected air, vastly reducing the risk of transmission.

After setting new records on Covid cases with every passing day, India has finally registered a marginal dip in cases on Thursday. The daily deaths stood at 3,874, as compared to Wednesday which saw the highest daily death toll with 4,529 fatalities. 2,76,110 new cases were reported in 24 hours ending this morning. Tamil Nadu alone takes the glory of being responsible for 12.63 per cent of the new cases. 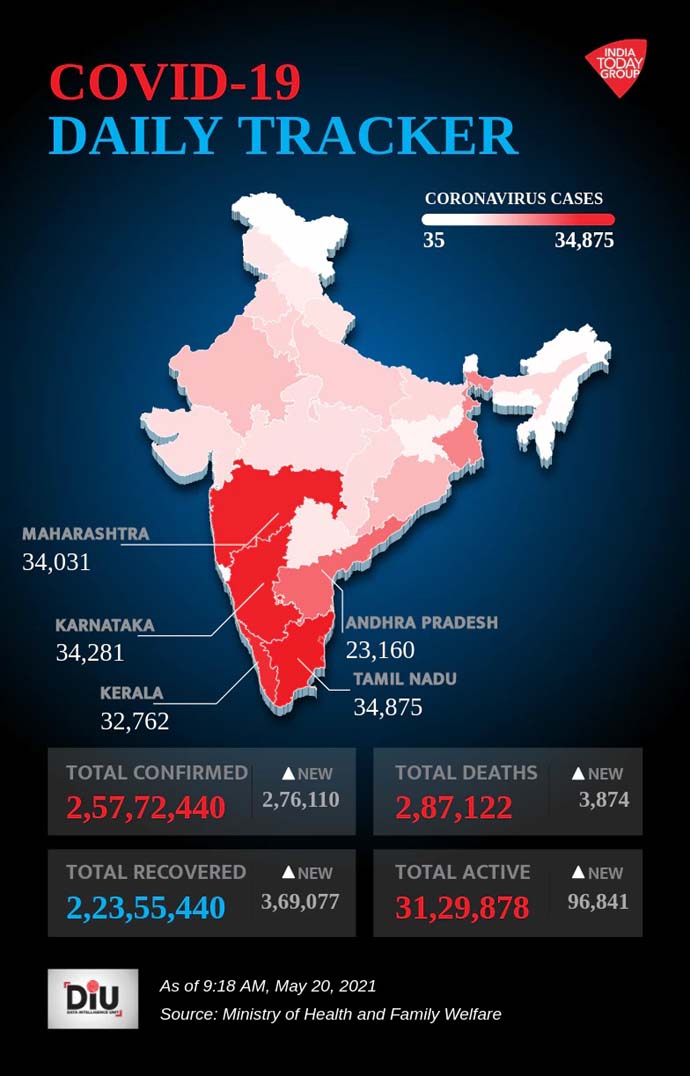 As cases soar, the laboratories are stretched beyond capacity and facing the heat. The country has been testing samples in the range of 16-19 lakhs a day to detect Covid cases. In fact, yesterday, India tested more than 20 lakh samples.

To offer some respite to the labs, the Indian Council of Medical Research (ICMR) has approved a self-testing Covid-19 kit. Any person can use this kit to test their Covid positivity at home. There is no requirement to visit an earmarked pathological laboratory to get one's sample tested. You can read this 10-point guide to how you can test yourself at home.

With the pandemic raging, the government is doing everything it can to control the spread. From vaccinations to awareness drives to issuing guidelines. The latest in that list has come from the office of the Principal Scientific Adviser to the Centre. This one is now nipping the bud at the early stage. While the usual parameters of masks, social distancing and sanitisation are there, this new set highlights the importance of ventilation to “Stop the Transmission, Crush the Pandemic”.

It says that well-ventilated spaces dilute the viral load of infected air (as compared to closed and poorly ventilated spaces), vastly reducing the risk of transmission.

Now, the space, like an office complex or a shopping mall, can be vast. But with centralised air conditioning, it does not qualify as a well-ventilated space. In such cases, the government recommends improving the central air filtration / increased filtration efficiency, using gable fan systems and roof ventilators. Simple strategic placement of fans, open windows and doors to let in the outdoor air and improve the air quality inside, cross ventilation and exhaust fans can go a long way in curtailing the spread, says the advisory.

Now, ventilation is not too much of an ask, especially when we are cooped up within four walls. Open those windows and doors and let some fresh air in. The government emphasises ventilation as a community defence and urges improving ventilation on urgent priority.

All this talk of ventilation, but what exactly is it? Our Word Of The Day is defined by the Oxford dictionary as “allowing fresh air to enter and move around a room, building, etc.” It derives its roots from the Latin noun ventulus that translates to ‘slight wind’ and in the verb form ventilō it means ‘toss, swing or brandish in the air’ or ‘expose to a draught’.

Need a guide to improving air circulation and ventilation in your home or office? We have your back.

Now to vaccination. The drive has been going on at a relatively slower pace than anticipated. Shortage of vaccines and the tussle between the states and the centre over who gets how many vaccines have left the masses in a mess. While you could consider travelling to Russia for a vacation and Sputnik V jabs if you have the kind of money, most Indians travelling abroad have no choice but to go for Covishield shots as it is the only vaccine recognised by most nations. 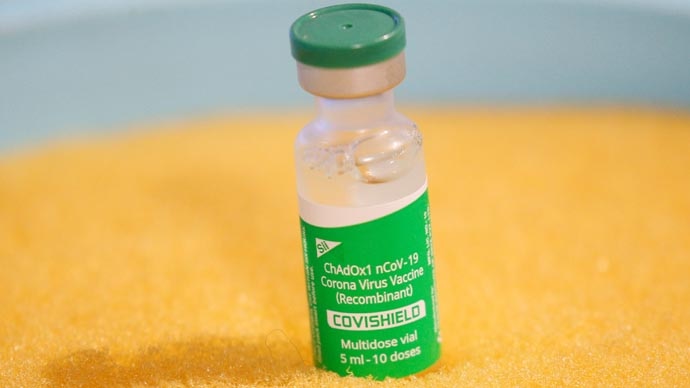 To add to the quandary, the government panel has predicted that the present Covid second wave is likely to end in July and a third wave will hit after 6 months. And now there are experts raising concerns that the third wave might hit children the most. As seen in some countries, more infections are being observed in children this year compared to last year as more transmissible variants emerge.

The US, Canada, Singapore and the UAE have already approved the Pfizer-BioNTech Covid-19 vaccine for emergency use in the 12-15 age group. Not to be left behind, the European Medical Agency is also in the process of reviewing the use of the Pfizer vaccine in kids. In India, the Drugs Controller General of India gave permission for conducting Phase II/III trials of Bharat Biotech's Covaxin in the 2-18 age group. Trials are expected to begin in the next 10-12 days. 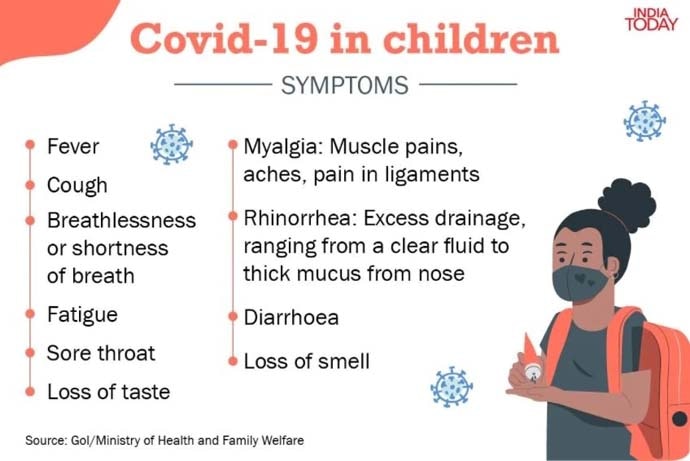 Covid has its own carnage, as do cyclones. Even after Cyclone Tauktae passed, the wreckage it has left behind remains. 261 crew members were on board Barge P305 near Mumbai (where it was stationed) when it went adrift and sunk due to the impact of Tauktae. Of these, 188 survivors were rescued. 37 bodies have been recovered so far. and 38 other members of the barge crew remain missing.

From western India to the other end - the east. In Bengal, the Narada case hearing saga seems to be surpassing Ekta Kapoor’s serials. We mean in terms of the time dragging on. The Calcutta High Court was to hear the case today, but that got cancelled due to “unavoidable circumstances”, as per the notice issued by the High Court this morning. The next hearing is tomorrow. Meanwhile, Firhad Hakim, Sovan Chatterjee, Subrata Mukherjee and Madan Mitra are currently in judicial custody.

Down South, meanwhile, Tamil Nadu Chief Minister MK Stalin has granted a 30-day ordinary leave to AG Perarivalan. Perarivalan the convict, who has been serving a life sentence in the Rajiv Gandhi assassination case for 30 years now. A Tamil Nadu government recommendation for his release under Article 161 is still pending before the state governor. Incidentally, tomorrow marks the 30th anniversary of the assassination. Now, why has Perarivalan been granted leave? At the request of the convict's mother, Arputhammal, who requested leave for her son on medical grounds amid the ongoing second Covid wave. 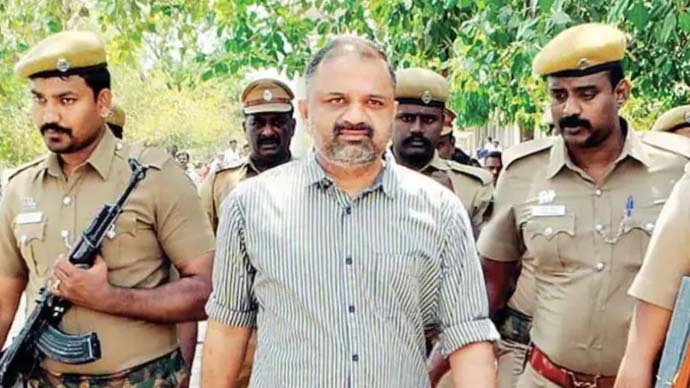 Let’s take a break from the news buzz and bring you the day dedicated to nature’s buzzers — the honey bees. Today is World Bee Day. It is interesting how this day came about. Today, in 1734, Anton Janša, the Slovenian pioneer of beekeeping, was born. Beekeeping is serious business in Slovenia. So much so, that the Slovenestake pride that their country – the wealthiest Slavic nation in the world – takes its work ethic from the honey bee.

We say bees and the image conjured in your mind is of that vat of honey. And honey comes from flowers. Did you know that a honeybee has five eyes, yet is blind to the colour red? And this is the predominant colour in flowers! While they can’t see red (pun unintended), but they can see in the ultraviolet spectrum (which we cannot). Bees can use odour cues to hone in on a flower, but that only works when they’re already pretty close. Vision is essential to help the bees find flowers at a distance. So how do they find flowers? Well, they don’t. Flowers over the millennia have evolved to attract bees (their primary pollinators). Many flowers have evolved distinctive ultraviolet colour patterns — invisible to the human eye, but are incredibly eye-catching to bees.

The tragedy is that the world’s largest pollinators are at risk of being wiped out. We recommend you watch the documentary Who Killed The Honeybees to understand why they are being wiped out and how can you do your bit.

With that, we say bye for now. We will be back tomorrow with more.

#Narada sting case, #World bees day, #Covishield, #Covid vaccination
The views and opinions expressed in this article are those of the authors and do not necessarily reflect the official policy or position of DailyO.in or the India Today Group. The writers are solely responsible for any claims arising out of the contents of this article.