How hospitality has changed in the new-normal era

For an industry founded on the principle of sharing and caring, the hospitality sector will have to rewrite its social rules radically when it reopens after the lockdown is finally lifted. With ‘contactless’ becoming the ‘new normal’ buzzword, the very basis of hospitality is under attack.

Imagine going into a hotel and not being welcomed with a mala-teeka-arti routine, placing a restaurant or room service order through a faceless medium (most likely a QR code) and even making a payment over it, and being served by gloved and masked people from a distance of two metres (the same people who would greet you with a warm handshake and a warmer smile, who’d pamper you and make you feel like a queen). And imagine, not being able to hold forth on the world with the chef. What will the hospitality sector be like without the touchy-feeliness that was so integral to it?

Some days ago, I received a WhatsApp message from my favourite home delivery service, Sushi Haus/Asian Haus, explaining how it had gone ‘contactless’. It piqued my curiosity, so I called the General Manager, Hitesh Arora, and asked him how a chef can make sushi or dim sum without any human contact. “By wearing gloves and changing them each time you make a batch of sushi or dim sum,” Arora said. 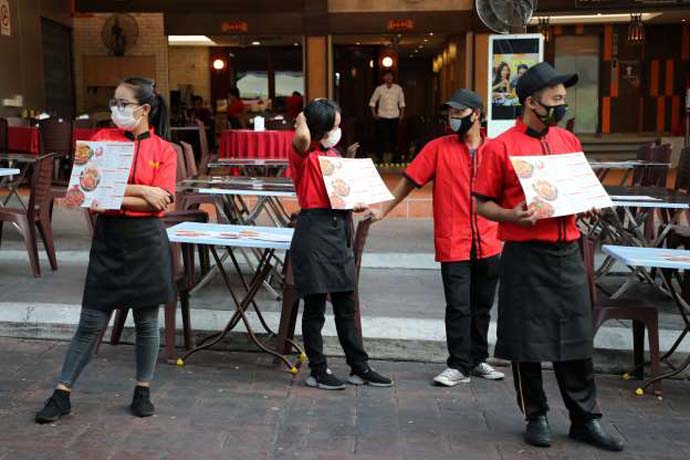 What will the hospitality sector be like without the touchy-feeliness that was so integral to it? (Photo: Reuters)

It is expensive, yes, because according to one estimate (it may not be an exaggeration), an average kitchen hand would have to change at least 24 pairs of gloves in a day. The Haus delivery boy today leaves your order at your doorstep and you make the payment via the link that is shared with you on your mobile phone. I miss the human contact, though – and the summer-time experience of serving water to the delivery boy. Even Social, the buzziest hangout created in the last decade, is doing concerts on Insta Live. Are we condemned now to engage with the real world only via virtual platforms? I am happier ordering a DIY kit from Smoke House Deli, also from the Impresario Handmade Restaurants. I can now cook at home some of my favourites from the restaurant.

Among international hotel chains, Hyatt Corp has been the first to come up with detailed ‘social distancing’ and hygiene rules. It has even set up a committee of experts at its headquarters and its composition would make you wonder whether it is overseeing a hospital or a hotel. My big fear, though, is that the world will move on from the Covid 19 scare, but hotels and restaurants would be sanitised beyond recognition – and forever. For the first time, I am hearing hospitality sector-top honchos talking about the quantities of hand sanitiser they should stock up. Earlier they would not let such worries cloud their thinking. They were more at ease talking about their wine and food acquisitions!

Losses from the lockdown

What does the extended lockdown – preceded by the slowdown in March – mean for the hotel industry? Figures released by the hospitality management consultancy, Hotelivate, paint a rather grim picture.

The losses for hotels are pegged at three levels – best-case scenario: (if life — it doesn’t look likely — returns to normal by June): $4.69 billion; mid-case scenario (if business revives by September 2020): $10.82 billion; and worst-case scenario (if the revival takes place later than this calendar year): $14.76 billion. The last figure translates at the present exchange rate into Rs 12,176 crore. Secondly, hoteliers of the level of general managers and executive committee members have had to accept pay cuts of 20 to 50 per cent for this financial year. Hotelivate expects these cuts to remain in place throughout the year.

Also read: Post-coronavirus, how India can bounce back