How to Prevent a Breakdown: What India must do

India Today Editor-in-Chief talks about the need to avert the very real danger of a complete nationwide breakdown with the lockdown in place, in the April 13, 2020 edition of the India Today Magazine.

Every country in the world is battling the novel coronavirus in its own way. Epidemiologists are churning out computer models of how the infection will spread and how many people will die. Scientists are struggling to understand the nature of the virus. Countries are looking at how each has fared and wondering which model to follow to minimise death and economic disruption. As the very articulate foreign affairs minister of Singapore, Dr Vivian Balakrishnan, put it, "In fact, this is an acid test of every country’s quality of healthcare, the standard of governance and the social capital. And if anyone of this tripod is weak, it will be exposed quite unmercifully." Of course, India cannot be compared with Singapore, but the points he makes remain valid.

India is unique for several reasons. With 1.3 billion people, we are the second-most populous country in the world and, with 420 persons per square kilometre, the 31st most densely populated. We are a poor country with a per capita income of $8,378 at purchasing power parity compared to China’s $19,503. India is 124th in per capita income among 191 countries, according to an October 2019 IMF report. This is reflected in the shabby state of our general infrastructure, and healthcare in particular. Every Indian is familiar with our slothful bureaucracy and self-serving politicians. Though there has been considerable improvement in recent years, we still have far to go for a responsive and efficient government. The social capital of a country refers to the trust its society has in government and its compliance with rules. This was dreadfully on display when hundreds of thousands of poor urban migrants defied lockdown orders and started to march to their villages. Rural India is troubled too. It is at a standstill, with the 205 million people engaged in agriculture waiting to harvest their crop and those who cannot access the markets.

Of course, India being a democracy with a free press cannot do many of the things autocratic China can to deal with this crisis. Besides, one cannot be sure what the actual numbers of infections and deaths in China are. We also cannot blindly follow developed countries because they have social security benefits for the unemployed and satisfactory healthcare. India has too many vulnerable people living on the margins of subsistence. It has 260 million workers in non-farm sectors such as services, manufacturing and non-manufacturing businesses. Of these, the lockdown has put an estimated 136 million at risk as many of these people are self-employed or work as casual labourers, in non-registered nano-businesses or registered small companies without written contracts.

The government was faced with a Hobson’s choice: risk the infection spreading as it has in other countries, or impose a total lockdown causing tremendous socio-economic disruption. It is now Week Two of the unprecedented three-week lockdown, the largest in human history. Several countries that did not lock down are now facing devastating consequences. The United States, with 3,100 deaths, will shortly surpass China’s death toll. Its health officials admit they could see upwards of 240,000 deaths. 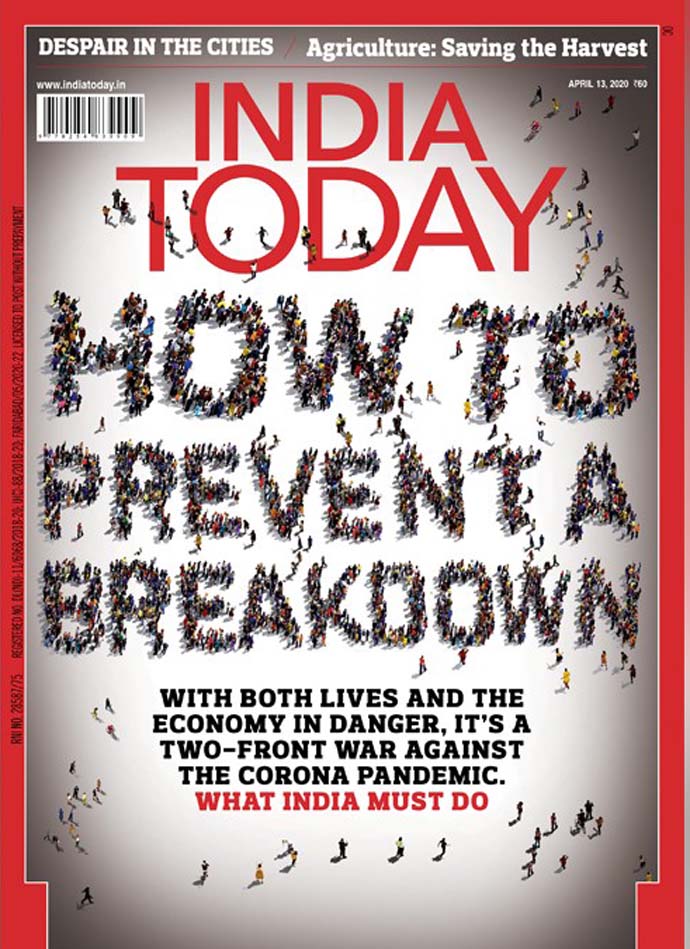 The 2,015 cases and 53 deaths in India, as on April 2, are still a fraction of the over 1 million cases and 50,000 deaths reported worldwide. But these numbers could be an illusion. Four weeks into the pandemic, we still have one of the lowest testing rates in the world, 32 tests per million compared to China’s 2,820. The fact that we are teetering on the precipice of a health catastrophe was highlighted only recently when a gathering of Tablighi Jamaat members at its New Delhi headquarters triggered the single-largest number of COVID-19 infections across South Asia.

Prime Minister Narendra Modi has set up 11 empowered groups to speed up the government’s response to the pandemic. Given our limited capacities in the health sector, from critical care equipment to protective gear, the government is clearly saving resources for a contingency. A lockdown buys it time by breaking the infection chain, despite the setback from the reverse migration of people and the Tablighi Jamaat congregation. In the next few days, it needs to sensitise people, enforce the lockdown and prevent community transmission.

At the same time, with the lockdown in place, it needs to avert the very real danger of a complete nationwide breakdown. It has to keep the wheels of the economy moving lest the health crisis become an economic one. Economic activity has ground to a complete halt, with March and April having been wiped off the economic calendar. The wheels have come off the logistics sector, halting the free movement of essential supplies. Agriculture, which employs the largest number of workers, has been severely affected as farms and fields lie idle. If the lockdown isn’t lifted by April 15, it could imperil the rabi crop harvest, which reaches its peak this month. The urban poor, most of them daily wagers, are on the brink of starvation. As one of them, an unemployed artisan, told one of our correspondents, "The lockdown has turned Delhi’s air pollution-free, but to enjoy it, I need food to stay alive."

Our cover story, ‘How to Prevent a Breakdown’, examines the challenges ahead and highlights what India needs to do to meet the crisis head-on. Senior Editor Sonali Acharjee assesses our capacity deficiencies in critical healthcare. Executive Editor MG Arun, Deputy Editor Shwweta Punj and Senior Editor Anilesh S Mahajan look at the paralysis of the road transport sector which ferries more than 50 per cent of cargo across India. Senior Editor Kaushik Deka examines the plight of the urban poor and how to protect their livelihoods. Consulting Editor Ajit Kumar Jha finds out how the agriculture sector is faring. Associate Editor Shougat Dasgupta documents how the migrant worker has been left in the lurch.

On April 15, the government will again be on the horns of a dilemma: lives vs livelihood. One thing is for sure: we are in for a long haul even after we overcome the corona crisis. We have to brace ourselves for it and not act in panic. These are truly trying times. The government has a humongous task in dealing with this pandemic. There is only so much it can do. The rest, literally, is in our hands.

(India Today Editor-in-Chief's note for the cover story, How to Prevent a Breakdown, for April 13, 2020)

Also read: How to Survive the Lockdown

Post your comment
#Economic crisis, #India today magazine, #Coronavirus in india, #Covid-19
The views and opinions expressed in this article are those of the authors and do not necessarily reflect the official policy or position of DailyO.in or the India Today Group. The writers are solely responsible for any claims arising out of the contents of this article.