DailyOh! When Karan Johar sang without training, to how eggs in Jamaica predict longevity on Good Friday

The lockdown is bringing out the best in everybody - from KJo's singing skills to the who rode 1400 kms on her Scooty to get her son back home.

It is a Friday today and you might say how it even matters if it’s a Monday or a Friday under the lockdown. But today is Good Friday, so allow yourself to feel good about it.

Now, even as you feel good, we hope you remember to stay home because, for now, that’s the only way to stay safe. The number of Covid-19 cases in the country has gone beyond 6,700 and nearly 200 deaths have been registered. Health Minister Harsh Vardhan today said that social distancing is the most "potent vaccine" till an actual vaccine is found to fight the virus. And we agree with the Health Minister.

Whether the lockdown gets extended or not is something we will know when the Prime Minister addresses the nation next. For now, everything suggests the lockdown is set to be extended. You might have read or heard on TV, it has been extended in Odisha till April 30. Now, the Health Minister has also said that we need some time to flatten the curve, which means we need some time to ensure newer infections aren’t happening. So, please prepare yourself to spend some more time confined inside your house.

You must be seeing all kinds of stories coming out of this lockdown: some funny, some extremely sad and some absolutely inspiring. One such inspiring story has emerged from Telangana where a single mother made a 1,400-km round trip on her scooter to bring her son back home from Andhra Pradesh. Now, no one doubted the extent to which mothers can go for their kids but this one will be difficult to forget.

Razia Begum is a 50-year-old teacher in the small town of Bodhan on the Maharashtra-Telangana border. Her son, Nizamuddin, travelled to Nellore in Andhra Pradesh to help his friend's ailing father when the lockdown was announced. The proactive mother approached Bodhan ACP Jaipal Reddy, who provided her with a curfew pass. Powered by the pass, Razia Begum set for a three-day trip. A 1,400 kilometres up and down drive from Bodhan. Trust mothers for their planning too. Razia Begim packed enough food for three days. Every time she was stopped at police checkpoints, the cops also helped her with shelter and offered help. Razia Begum and her son Nizamuddin on their way back from Nellore. (Photo: ANI)

We can’t say this enough there is no limit to what a mother would for her children. But did you know of this mother in the United States who drove her minivan with her three kids into the surf of the Atlantic Ocean to "protect them"? The incident happened six years back. In 2014, Ebony Wilkerson, who lived in Florida, believed in supernatural beings. Now, God too is supernatural, but she believed in ‘demons’.

She decided to take her children to safety away from the demons. But how she chose to do it will leave you shocked. She came up with the grand idea that she could protect her children by drowning them. Yes, you read that right.

The kids kept screaming for help: "Please help us, our mom is trying to kill us.” Thankfully, the authorities caught up soon after she drove into the ocean and rescued the mother and the kids.

Ebony was, of course, arrested. She was later found to be suffering from psychiatric disorders.

We can only be thankful that the authorities caught up on time. And did what was required of them.

But not all authorities do what is required of them. Oh, we are talking of the authorities in Maharashtra. Yes, about the DHFL promoters who were caught flouting the lockdown. The brothers, both residents of Mumbai, reportedly went vacationing - armed with lockdown passes - to their farmhouse in Mahabaleshwar.

Our Covidiots Of The Day, Kapil and Dheeraj Wadhawan, have been booked for travelling to Mahabaleshwar from Khandala in Maharashtra. But there is more to their idiocy. They were in the farmhouse with 21 others, who included their family members, a bodyguard and a cook.

You might be thinking what were the Mumbai residents doing in Khandala. We will answer that for you. They were evading the authorities.

The brothers are wanted in the Yes Bank and DHFL fraud cases by the CBI and Enforcement Directorate. And they were dodging the authorities by hiding in Khandala. Come lockdown, and the family decided to make a little holiday of it in the Mahabaleshwar hill station. The Mahabaleshwar residents did what all responsible citizens should do. They informed the cops. The entire family is now in quarantine. Once their time in the quarantine is over, they will be handed over to the CBI and ED for questioning. Serves them right, we say. 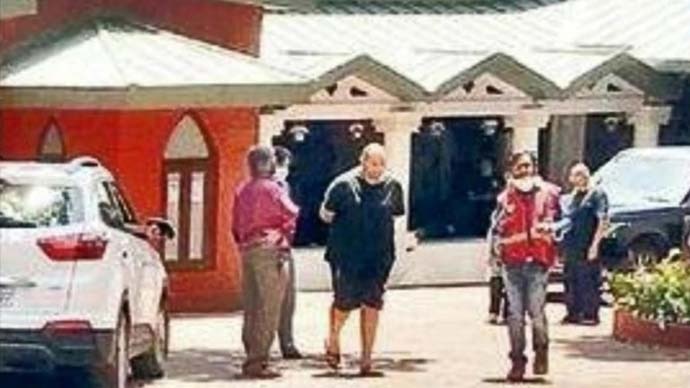 The Wadhawans may have tried to use their privilege to give authorities a slip, but most people are following the lockdown guidelines seriously. Bollywood, meanwhile, is doing what it can to keep us entertained.

Karan Johar has taken to singing to ensure his kids do not feel bored at home. Sadly, for him, the kids, Yash and Roohi, haven’t given the singer in him a thumbs up. Roohi, in fact, asks her “dada” to “stop making noise”.

Treat yourself to this overdoes of cuteness:

So ever since I can remember I have loved singing! Am so glad to know I have a loving audience .....#lockdownwiththejohars

But KJo isn't as tone-deaf as he claims to be. Did you know when he recorded a song without any prior training? In 2017, he was co-judging the singing reality show Dil Hai Hindustani with music director Shekhar Ravjiani in. Apparently it was a Ravjiani's composition and the music director said that there was no time for training before KJo entered the recording studio. Here is KJo is his playback singing debutant avtar:

Even as KJo and other Bollywood celebrities try to spread the cheer, the coronavirus scare in Mumbai is only rising. Authorities are working round-the-clock to trace people who have been infected and those the infected people could have come in contact with. That as you might know is called contact tracing. Now, this is happening across the country, but Maharashtra as you is the worst-hit state in India. And Mumbai the worst-hit city in Maharashtra.

So, what does tracing mean and where does the word come from. Trace, as you would have understood by now, is our Word Of The Day.

According to the Oxford dictionary, trace is “to find or discover somebody/something by looking carefully for them/it”. The word could have originated from Old French ‘tracier’, which means "look for, follow, pursue". That’s exactly what authorities are doing. Looking for those who could have been infected, following the trail of people with whom they could have come in contact with. Here we mean physical contact. Not virtual or telephonic. We know you know. But it’s always good to clarify.

So how is the government doing this? Through phone surveillance majorly. Last week, the Indian government rolled out the Aarogya Setu app for contact tracing of the suspected coronavirus cases. The idea is to reduce time and errors that come with manual identification.

Contact tracing is also what was performed in the case of superspreader, Patient-31 of South Korea, to identify those who she could have potentially infected. South Korea has come a long way since seeing a major spike in Covid-19 cases in the first week of March. With aggressive testing and contact tracing by the government, the number of new cases has come down drastically. In fact, early voting in South Korea's parliamentary election kicked off today, with coronavirus patients and medical workers in Seoul and Daegu casting their ballots. Democracy stops for none, including the novel coronavirus. Or Spanish Flu in 1918. Voters casting their early ballots for South Korea’s parliamentary election at a polling station in Seoul on Friday. (Photo: Reuters)

The US presidential elections of 1918 took place during the Spanish flu pandemic and World War I. As you would expect, campaigning and public gathering was disrupted, but the polls were held on schedule. Of course, the turnout was too low.

Coming out to vote and then standing in a queue to cast your vote can expose you to grave dangers. It is said the then POTUS was himself unwell, possibly with the flu. President Woodrow Wilson won the second term to the office but his condition deteriorated so quickly, his personal doctor, Cary T Grayson, thought he had been poisoned.

American author and historian John Barry in his book The Great Influenza wrote, "But it soon became obvious the diagnosis was simpler, if only marginally more reassuring." The deterioration in Wilson’s health was thankfully after the elections, and he recovered under Dr Grayson's able care.

Many suffering from Covid-19 are also recovering. That is the good news we can draw hope from. And why settle for just hope, when you can add cheer to your mood? So, add some cheer because we told you, it’s Good Friday.

While you may be among those who missed going to the church, you at least get to spend the day with your family at home. At least that’s what we hope for you. Talking of Good Friday, did you know that Jamaicans have an interesting way of predicting death and longevity on this day? According to the customs, Jamaicans believe in breaking an egg and adding the white to a glass of water. Wait for the sun to warm the glass and the patterns could apparently tell how one was going to die.

We wonder how many saw the coronavirus patterns emerge in their glasses. Just kidding.

Enjoy your weekend and Happy Easter in advance!

Also read: DailyOh! When Rahman was unhappy with Humma remix, to why 'rockstar' stumped Ravindra Jadeja