India Today Editor-in-Chief talks about how a rural Covid-19 pandemic will be very different and far more challenging than an urban one, in the September 21, 2020 edition of the India Today Magazine.

On March 24, at 8 pm, India imposed one of the severest lockdowns in the world due to the corona pandemic. On that day, there were 574 Covid-19 cases and one death in India. Consequently, as the economist Kaushik Basu stated, “you froze the economy totally and allowed a whole lot of people to be scattered all over—so the germs were spreading…” The cost-benefit of the extent of the lockdown has been debated endlessly, but mainly in the realm of conjecture. It was a difficult choice between lives versus livelihood and getting the breathing space to build the medical infrastructure to cope with the impending pandemic. That apart, the government had not anticipated or planned for urban migrant workers returning to their villages in hundreds of thousands, the consequences of which we are facing now. On September 7, India crossed Brazil’s record for the world’s second-highest number of Covid-19 cases.

The country’s 75,062 Covid deaths as on September 10 represent the third-highest toll in the current pandemic. By September 10, total cases in India stood at 4.5 million. Our infectivity rate has also doubled to 8.6 per cent from 4 per cent three months ago. We have added an average of 89,000 cases daily over the past week. The silver lining, albeit a thin one, is our case fatality rate—which measures the severity of a disease—of just 1.7 per cent. Our recovery rate of 77.7 per cent as on September 9 is among the best in the world. When the lockdown began, Covid was confined to the big cities. Until recently, Mumbai, Delhi, Ahmedabad, Chennai, Pune and Kolkata accounted for half of all reported cases. 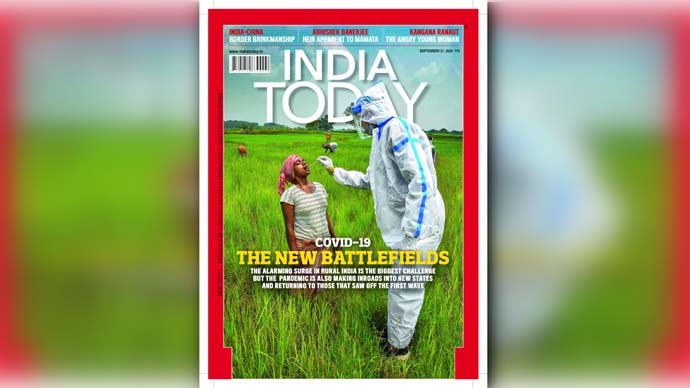 More worrying for us, however, is a new and alarming trend—the upward arc of Covid cases in our rural hinterland. If between March 1 and July 17, 40 per cent of the Covid cases were from rural and semi-rural districts, the figure has now gone up to 67 per cent. As inter-district travel opens up, states are reporting a spike in rural Covid-19 cases. For example, Odisha currently has 59 per cent rural cases, Jharkhand 41 per cent, Chhattisgarh 37 per cent and Bihar 40 per cent. In Maharashtra, state health department statistics show that five districts—Nagpur, Osmanabad, Beed, Sangli and Kolhapur—recorded an average rise of 400 per cent in cases in August, compared to 28 per cent in Mumbai. These are frightening figures because the gaps in India’s creaky health infrastructure are the widest in rural areas. Over 65 per cent of India lives in its villages, but rural India has only 37 per cent of the country’s doctors. Primary health centres or PHCs, the first point of contact between a patient and the public health system in rural India, are understaffed. Close to 2,000 PHCs have no doctors.

Villages have just 3.2 beds per 10,000 people as opposed to the WHO basic norm of 1 for every 300 people. Pune district’s Rajewadi village— one of the several rural case studies we tracked across the country—went from zero to 91 cases in just three weeks, and has an infection rate of 25 per cent—three times the national average. The nearest Covid hospital is in Pune, 50 km away. The district is predicted to have a shortage of around 2,000 oxygen beds and 350 ventilators this month, given the current doubling rate. West Bengal’s North 24 Parganas district has just one referral address for its 10 million people and 33,800 Covid patients, the second-highest tally in the state. Even as our rural areas witness sharp spikes in cases, policy-makers have to take on two other battlegrounds: several states that had low affliction rates now show a worrying rise, and those that believed the disease had waned are facing a resurgence. The states that have made their way to the top this August for the total number of cases are Karnataka, Uttar Pradesh, Bihar and Assam. In states that thought they had flattened the curve, like Delhi, Kerala, Goa, Nagaland and Madhya Pradesh, Covid infections have returned.

Given the resumption of intra-district movement and the easing of lockdowns in urban centres, experts warn that it is only a matter of time before the infection sweeps through the hinterland if steps aren’t taken right away. Also, as economic activity begins to recover, there is now a reverse migration to urban areas, further increasing the possibility of the disease spreading.

A rural pandemic will be very different and far more challenging than an urban one, health experts tell us. Our cover story, ‘The New Battlefields’, written by Associate Editor Sonali Acharjee with inputs from our bureaus across the country, tracks this alarming trend. Strangely, the surge in Covid cases is still not causing widespread consternation. As states cannot ramp up rural health infrastructure fast enough, they have opted instead for containment measures. Covid-19 has now become a fact of life to which everyone has to adapt. India cannot afford to shut down its economy again, especially since there are some signs of revival. What is needed is an increase in testing and more public awareness programmes to curb the spread of the virus. Prevention is far better than a cure, especially when the cure is not on the horizon yet.

Also read: Coping with Covid: Why our lives will never be the same again

#India today magazine, #Coronavirus pandemic, #Rural India, #Covid19
The views and opinions expressed in this article are those of the authors and do not necessarily reflect the official policy or position of DailyO.in or the India Today Group. The writers are solely responsible for any claims arising out of the contents of this article.