As India woke up on Thursday, Coronavirus added 3.16 lakh people to its tally of infections. 2,104 people did not wake up to see this Thursday. Some people died waiting for a test; some gasped for breath on the footsteps of a hospital, while some others could not even make it to a hospital bed. The crisis is worsening. That hasn't in any way dampened election campaigns in West Bengal though. While Home Minister Amit Shah had one rally and cancelled two today, state Chief Minister Mamata Banerjee brought up the BJP's khela in front of thousands of people with social distancing thrown to the wind. Some attendees were also seen with masks on their chins, a la, Banerjee. But that's happening in a parallel universe for now.

Our focus today is the main thing: India's battle with the coronavirus. Prime Minister Narendra Modi announced Thursday evening that he was cancelling all his Bengal rallies scheduled for tomorrow and instead, will now be chairing high-level Covid meets. "Tomorrow, will be chairing high-level meetings to review the prevailing Covid-19 situation. Due to that, I would not be going to West Bengal," tweeted the PM.

Tomorrow, will be chairing high-level meetings to review the prevailing COVID-19 situation. Due to that, I would not be going to West Bengal.

The Supreme Court today took suo motu cognisance of several high court hearings on Covid underway in various parts of the country and asked the Centre for a national plan. The apex court issued a notice to the Centre on the supply of Covid care essentials, such as oxygen and medicines. The matter will now be heard Friday, that is tomorrow. Covid-19 has wreaked havoc in India, with Delhi topping the numbers. Photo: PTI

Today, Saroj Super Speciality Hospital in Delhi knocked on the doors of the Delhi High Court when it was left with "only 60 minutes of liquid oxygen". The hospital had 70 critical Covid-19 patients in intensive care, and 48 patients on invasive and non-invasive ventilator support and in need of high flow oxygen when it filed a plea with the High Court. The Delhi High Court has directed the Centre to provide adequate protection to tankers carrying medical oxygen, and to also create a separate corridor for transport of oxygen.

IN A PARALLEL UNIVERSE: BENGAL While Delhi fought oxygen scarcity and Covid, 1,500 kilometres away in Harirampur, West Bengal, Union Home Minister addressed a public rally - the first of his three rallies for the day. Shah cancelled the two subsequent rallies. 33 kilometres from where Shah was addressing his first rally, Bengal CM Mamata Banerjee told her audience of several thousand that she knew how to play [the game]. "We cannot surrender our Bengal to two goons of Delhi," said Banerjee, as the biggest goon of 'em all, Coronavirus, had a field day. 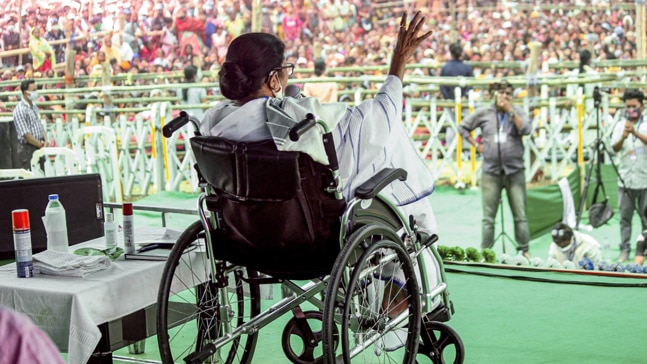 Mamata Banerjee during her rally in West Bengal on April 22. Photo: PTI

In this parallel universe called West Bengal, the sixth phase of State Assembly Elections also took place today. Voters left their homes to vote for Poriborton or Ashol Poriborton or the pre-Poriborton era, and May 2 will tell it all. Some incidents of stray violence were also reported as the state went to polls in Phase 6.

A LITTLE FARTHER TO THE EAST: ASSAM

Now as Bengal voted for change or no-change, 300 people in Assam voted for their position to the Covidiots Council if there were one. So what happend in Silchar, Assam?

The Silchar airport in Assam is an otherwise quiet airport. Wednesday, however, it was different. 690 passengers got off six flights yesterday. Over 300 of them skipped the Covid test upon arrival. Authorities say they 'have all information' on these people and will be dealing with them soon. If this makes you ask why would the passengers do something like this, it is probably because people are people and people do all kinds of things.

TO THE FAR EAST: TOKYO We will leave officials in Assam to deal with the defaulters for now and move to Tokyo, which is expected to host the Olympics in July-August this year. The Tokyo Olympics was initially slated for 2020 but we all know how 2020 went. So this year, as Tokyo gears up to host the Olympics, the International Olympic Community has maintained its ban on podium protests. Taking a knee or raising a fist - both symbolic protests in support of racial equality - will be punished.

NOW, TO THE CITY OF DREAMS: MUMBAI

Back in India, in Mumbai, to be precise, as Covid rips through the city of dreams, Salman Khan has gifted fans a promise to 'clean up Mumbai'. No, not of Covid, but criminals. We are talking about Radhe, Your Most Wanted Bhai, who dropped the trailer of his Eid 2021 release on YouTube today and promptly got trolled on Twitter for not using his influence to do something better at a time like this. Out on Mumbai streets meanwhile, Salman was spotted donating food packets to frontline workers.

You can see the trailer here if you need a few minutes off from all the grim news on the earth.

MORE ON THE EARTH

Today, April 22, happens to be Earth Day. It is a day to mark the birth of the modern environmental movement in 1970. The first Earth Day was celebrated on this day 51 years ago and this year, the theme is 'Restore Our Earth'. 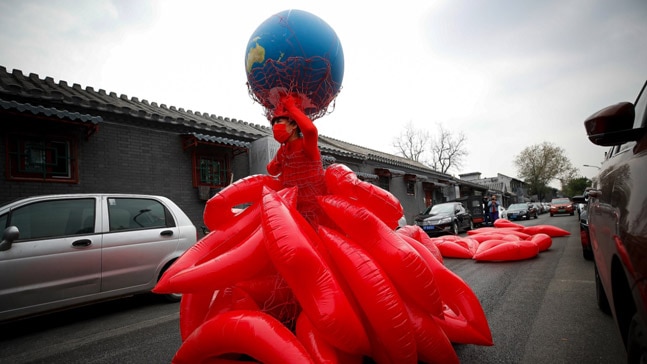 We all have seen, heard, experienced the need to do that, given that we only have one Earth, but have you ever wondered what on earth the word 'Earth' meant?

To begin with: we don't really know how Earth got its name Earth. What we do know is the origin of the word. Earth, our Word Of The Day, is derived from English and German - 'eor(th)e/ertha' and 'erde' respectively - both of which mean soil or ground. You could argue that two-thirds of the Earth is actually water so why not name it after water, but since no one quite knows who named the Earth Earth, that question would most likely go unanswered.

Apart from being unique in its life-hosting capabilities, the Earth we live on is also unique because its name is derived from something found on the Earth. Soil. All other planets in this solar system are named after Greek or Roman gods and goddesses. Mercury, Venus, Mars, Jupiter, Saturn, Uranus, Neptune - and the one who lost its planet status, Pluto.

Before we sign off for the day, a book recco: Chalie Mackesy's The Boy, The Mole, The Fox and The Horse, an illustrated piece of hardbound hope that has made many people smile over the past year. You can pick it up too.

If you're going out, remember to mask up.

If you don't absolutely need to go out, stay in.