India Today Editor-in-Chief talks about what is wrong with India’s vaccination strategy and how to set it right, in the April 26, 2021 edition of the India Today Magazine.

India has often exhibited a penchant for snatching defeat from the jaws of victory. It seems so with the way we are handling the Covid-19 pandemic. On February 1, India had 8,500 new cases, the lowest figure since June 8, 2020. On April 13, that had climbed to 180,000 new cases in a day, the highest level since the pandemic began.

Unfortunately, this is a feat the country has been surpassing every day since April 6. Last week’s resurgence of the Covid-19 virus has now turned into a tsunami. The April 13 count took our total active cases to 1.2 million and our total Covid count to 13.7 million, the second highest globally after the 31.3 million cases in the US. 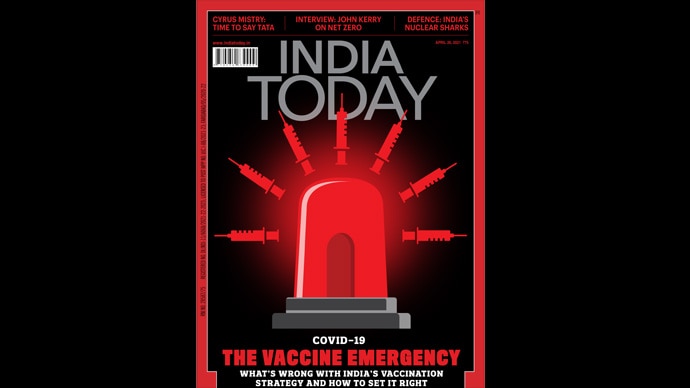 We mistook the calm before the storm as evidence of its absence and went on with daily life—not to mention religious congregations and political rallies. This, too, highlighted the double standards of our political class. While the infections were skyrocketing and citizens in some parts of the country were put under curfew, there was no bar to these massive gatherings where the participants hardly followed Covid protocols. It is this laxness and callousness that are exacting a heavy toll now. Each day brings gloomy tidings, and India’s crises seem to be multiplying like the virus itself. A bigger worry now is that the wave ripping across cities is infecting a demographic that seemed to have been insulated during the first wave—the 15-44-year-olds.

An acute shortfall of hospital beds saw a leading hospital in Mumbai converting its lift lobby area into a patient ward. India’s health infrastructure, assiduously built during the world’s severest lockdown of 68 days, is already stressed and may soon be overwhelmed. Engulfed by the virus, India’s economic powerhouse Maharashtra has imposed a lockdown. As we saw last year, lockdowns can demolish the economy but it may be just a matter of time before this becomes the only option to halt the spread of the virus. India cannot afford this option as it will cause untold misery to millions. There is, therefore, a dire need to stem this tide as soon as we can.

The solution, of course, is to vaccinate large numbers of the population swiftly. Vaccines are the only surefire way of softening the virus’s blow, reducing the risks of contracting an infection, severe illness and death. To reach herd immunity, ndia needs to vaccinate 75 per cent of its population, or 990 million people, which means we need 1.98 billion doses (for two doses of the vaccine). We are currently vaccinating just 4 million people per day. We need to increase our vaccination rate to 20 million per day and have a steady supply of 600 million vaccines per month, compared to the present capacity of 80-100 million per month, once more vaccines are approved.

The task is humongous and one the government should have been prepared for. Right now, we don’t have enough doses of the vaccine to ramp up our vaccinations, and the path for the future is not clear. For the world’s largest vaccine producer, this is an incomprehensible place to be in. It is equivalent to Saudi Arabia telling its people it has no oil for them more vaccines only in the last week of March, two months after the vaccination programme began. For all its cynicism about the pandemic, the Trump administration paid Pfizer almost $2 billion for 100 million doses, with the option to acquire another 500 million if the vaccine succeeded. Today, the US has enough doses to vaccinate its entire population twice over.

In the initial phase of our vaccination campaign, an appalling communication gap to overcome vaccine hesitancy led to a wastage of 8-9 per cent of the vaccines in some states. The second wave should not have come as a surprise. It was obvious that once the economy restarted, there would be a rise in infections, as has happened in many parts of the world. We all know we are probably the least disciplined nation globally and delight in flouting or circumventing regulations. Also, just as every nation keeps a stockpile of energy sources like oil or coal for emergencies, we could have kept a reserve stock of vaccines when the demand was low. India’s vaccines require only a refrigerator and could have been easily stored by the government for up to six months. Instead, we exported 60 million vaccines while administering only 70 million doses to our own people.

Our vaccine strategy reeks of complacency and government over-regulation. The shortage of vaccines dictated India’s stratified approach to vaccination instead of allowing it to open it to all. Not involving the private sector in the distribution of the vaccine has also ended up hampering the effort.

Despite 16 vaccines in clinical and pre-clinical trials in December, it took the Drugs Controller General of India four months to amend protocols to speed up trials. Several vaccines in developed countries have gone through extensive trials and have been approved by their drug controllers, and their use in India can be fast-tracked. At the current vaccination rate of 4 million people per day, it will take us until mid-July to achieve the target of fully vaccinating 300 million people and a year and three months to vaccinate 75 per cent of the population. By that time, the 8-12-month protection period for those who have been fully vaccinated would have started wearing off, and they would require a booster shot.

Our cover story, ‘The Vaccine Emergency’, written by Associate Editor Sonali Acharjee, examines how India came to be in the current crisis, how various factors derailed a sensible vaccination strategy, how an increase in the number of the vaccine-eligible and a surge in cases drove up vaccine demand, outstripping production capacity and exhausting vaccine stocks.

The government seems to have woken up now by importing foreign vaccines. But we have already lost critical time. It will take another 3-4 months for these measures to take effect. The government needs to beef up capacity, spend money and subsidise vaccine production while ramping up vaccination. It needs to rope in other pharma companies, deploy the state’s resources and the private sector to swiftly vaccinate the population before a third wave crashes into us.

#Coronavirus, #Covid second wave, #Covidvaccine
The views and opinions expressed in this article are those of the authors and do not necessarily reflect the official policy or position of DailyO.in or the India Today Group. The writers are solely responsible for any claims arising out of the contents of this article.