The Indian Institute of Technology (IIT) Kanpur declared the results of Joint Entrance Examination (JEE) on Sunday, June 10. Neither my relatives and acquaintances nor I was aspiring to get admission into the IIT, but here I was, eagerly awaiting the results because of the existence of a small village in Bihar. Eastern India may be perceived as stingy in sending its children to the IITs, yet one village frequently admits its children to the engineering cradle. When Bihar fell in love with the civil services, this village found comfort in the IITs.

In the backwoods of Patwa Toli, a hotbed of the Maoist movement, many students pursue the dream of cracking the JEE and transforming their economic condition and living standards. Cutting themselves off from all sorts of distractions, these youths from the regressive Patwa (weaver) community concentrate hard in the uproar of loud weaving machines, for a place in the JEE qualifying lists. The weavers of Patwa Toli in Bihar’s Gaya district build two things in bulk: colourful textiles and engineers. While one is their ancestral profession, the latter is quite obviously the result of recession. 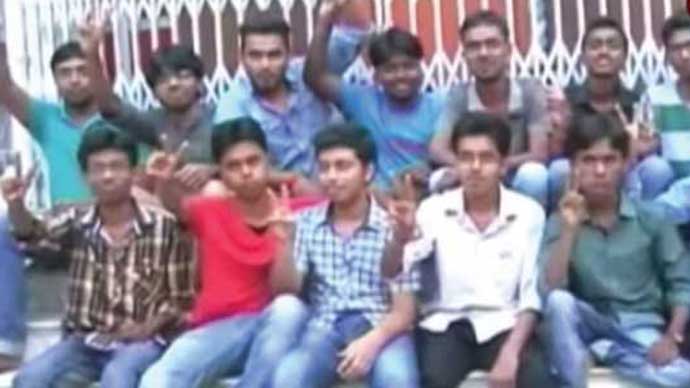 While they mostly speak Hindi at home, their preparatory exercise books are in English and they learn the language by taking a dictionary to bed. Photo: Screengrab

After the recession hit the handloom sector in the 1990s, there was a huge log jam in the market and the weavers in Patwa Toli were compelled to leave their conventional occupation and began working as rickshawpullers, vegetable vendors and daily wage labourers. Fortunately, the children of Patwa Toli studied hard in the midst of loud weaving machines and poverty to crack the nation's toughest engineering exam, the IIT-JEE. The legacy began when Jitendra Prasad, a local, and the son of KC Thakur, cracked the prestigious IIT-JEE in 1991. Soon enough, other children in the neighbourhood were inspired to follow his strides. 1500 families of the village decided to prepare their children for the toughest engineering entrance exam in India as they made the IITs their goal and Jitendra their role model.

Although the vast majority of the weavers in Patwa Toli has been living in poverty in the neoliberal era, the new generation is inclined towards job security and education and expects to enhance its economic status. A large number of the studious young men of Patwa Toli usually go to coaching centres in Gaya town to prepare for the entrance exam. The most common issue that the students face is lack of proficiency in the English language. While they mostly speak Hindi at home, their preparatory exercise books are in English and they learn the language by taking a dictionary to bed.

This is a small issue because the community unites to provide students the facilities they need. Various hostel-like “home centres” have been set up where the JEE aspirants study in groups. The achievements are also to those IITians’ credit who spend their vacations at the village and guide the aspirants, besides providing them financial support. Former Patwatoli IITians and engineers have additionally shaped educational associations like “Nav Prayas” that trains the aspirants for exams. They also organise a local talent hunt-type examination consistently to screen students and help them polish their skills. The results started showing only after 1998, when three boys made it to the IITs, and in 1999, when seven students emerged victorious. Since then, there has been no looking back.

According to the records maintained by locals in the last one and a half decade, more than 200 students from here have got themselves into the IITs, while various others have gone to NITs and other top regional engineering institutions. In 2017, 20 aspiring engineers belonging to this very locality cracked the IIT entrance exam; it is nearly impossible for so many students from a single area in many regions across the country to achieve this feat.

In 2016, there were 11 successful IIT aspirants and in 2015 there were 12 such students who cleared the entrance exam from the Patwa Toli locality. However, in 2018, just five students qualified for it. Today, every home in Patwa Toli has at least one engineer. It is evident that harsh circumstances of the past few years have made these weavers of the Patwa community progressive and self-sustaining. The success of the IITians was so stupendous that the youth took to engineering when they had to give up the traditional occupation of weaving for which their town was once known as the "Manchester of Bihar”.

While the clamour of weaving machines is an indication of good business, the children of Patwa Toli have been weaving a dream of their own. Today, Jitendra has settled in the United States and the other engineering graduates are working in various Indian cities. But some IITians from the village have concentrated on mentoring other locals and giving back to society. The driving force behind their dedication are supportive parents.

The villagers here, despite economic hardship and hunger, work as labourers or weavers at power looms owned by others in order to educate their children. These students deserve much more recognition at the national level so that they can become an inspiration for other marginalised communities in India.

Also read: Why a Muslim girl scoring 100 in Sanskrit in CBSE Class 10 is no news