Theresa May: Cricketing metaphors and the end of Prime Ministerial innings

It was a cricketing metaphor used by Geoffrey Howe that was the undoing of the more long lasting Margaret Thatcher government.

When a journalist used a cricketing metaphor to compare the resignation of several members of her cabinet as the loss of many wickets in quick succession, she took the cue by invoking the batting of Yorkshireman Geoffrey Boycott and his tenacity to remain at the stumps despite the odds. 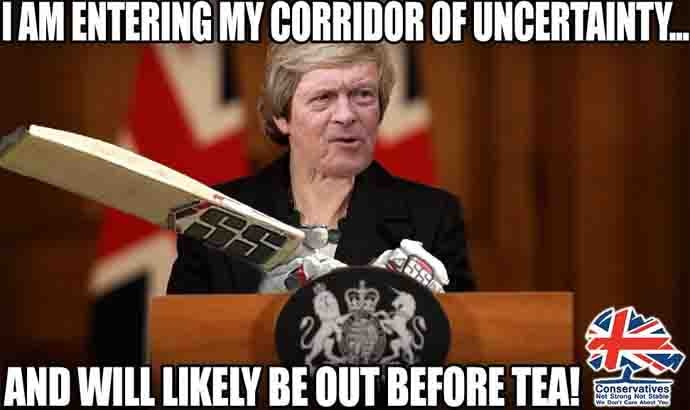 The more immediate roots of the current meltdown in British politics go back to David Cameron suggesting in January 2013 that if he was re-elected in the 2015 elections then he would hold an ‘in-out’ referendum on Europe. He thought he could win hands down and this would once and for all put to rest the notorious Euro-scepticism of his Tory backbenchers.

His visible irritation over their constant griping was evident when he almost snappily suggested he wished that they would stop "banging on about Europe". Cameron of course won the 2015 elections, holding the referendum as promised the next year in June 2016 and swiftly resigning when the leave verdict won narrowly.

Were the #MayBot batteries not fully charged? Is that why the press conference was late? #BrexitChaos #TheresaMay pic.twitter.com/YBkUzjdziI

That of course paved the way for Theresa May’s rather uninspiring Prime Ministerial tenure that has, perhaps a bit cruelly, been referred to by the Guardian columnist John Crace as the ‘Maybot’ malfunctioning, a reference to her robotic, almost sclerotic demeanour. In press conferences and public pronouncements she has this tendency of continually riveting back to a particular word or phrase.

During the elections in 2017, which she called in the mistaken belief that she could consolidate her parliamentary majority over Labour, she kept repeating ad infinitum her stock phrase of how she would ensure a "strong and stable government". 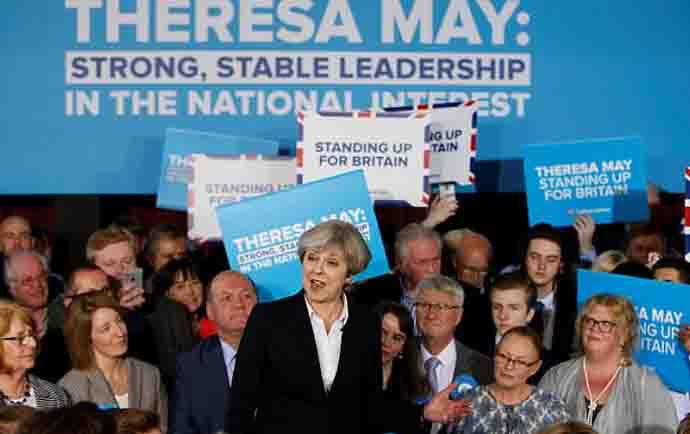 Theresa May's relentless use of the election slogan 'strong and stable' is being remembered by voters. (Credit: Reuters)

The stuck needle on the record quality of this utterance became the butt of the notorious humour of the British media. In the press conference that she did on Thursday, November 15, the day after her marathon cabinet meeting over the Brexit deal that she is selling to the nation, she repeated ad nauseum that the deal was in the "national interest". This is one of those hackneyed terms that mean nothing at all. A politician’s appeal to the national interest can only mean the petty interest of hanging on to power. 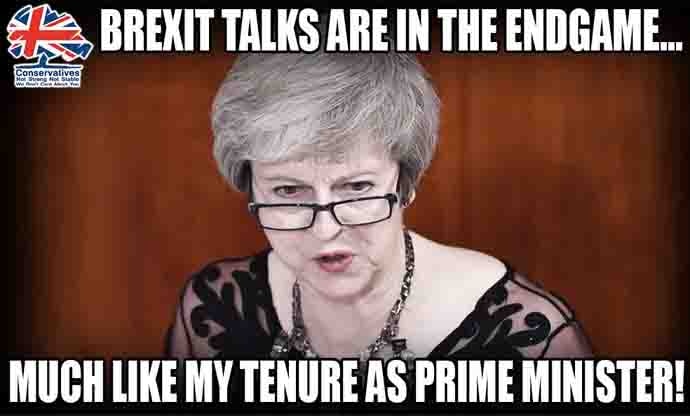 There is a strange 'seconds before the crash' quality to the whole Brexit build-up. (Credit: Twitter/@StrongerStabler)

Remarkably, Theresa May has the ability of using supposedly no-nonsense, matter-of-fact statements that are entirely vacuous in terms of what they imply. In the immediate aftermath of the Brexit referendum as she stepped up to occupy the Prime Ministerial office, she rather tersely summed up her own position by saying "Brexit means Brexit".

It is the apparently straightforward, "let’s get down to business" nature of this statement that hides the fact that it is actually nothing more than a ‘tautological repetition’ which seems to be the only thing that Theresa May is good at.

This is a predicament that can only be summed up by the sardonically dry humour that the British are brilliant at, one instance of which is to suggest that Brexit is the political equivalent of trying to reverse a vasectomy. There is a strange "seconds before the crash" quality to the whole Brexit build-up, which you watch in movies that depict disasters in slow motion. Theresa May apparently at the helm of affairs, is parroting her instinctively habitual inanities over and over and over again, eyes vacantly transfixed on the ‘Brexit exit’ sign.

The Brexit enthusiasts who seem to believe in it with the fervour of a religious faith, are forcing May’s hand to suddenly turn the steering wheel to the right, onto the side of a hard Brexit against the crash barrier, that will be followed by their attempt to snatch the severed wheel from her altogether. Where is Jeremy Corbyn’s Labour in all of this?

One would have thought that the Labour party would be waiting efficiently to move into the driver’s seat. After all, this is what any Opposition would delight in, a government in chaotic overdrive.

Yet Corbyn is certainly not the kind of politician who can move in for the kill in the way that the traditional politician’s instinct suggests. There is almost a slow moving, deliberative, lumbering quality to him, which can cost him electorally.

Over the summer before the party conferences, which is referred to as the ‘silly season’ in British politics, Corbyn’s Labour party was heavily embroiled in charges over anti-Semitism. Rather than adopting the International Holocaust Remembrance Alliance (IHRA) definition of anti-Semitism completely, as many in his party suggested, Corbyn seemed to be engaged in political hair-splitting when he made distinctions between anti-Semitism and criticism of Israel. This meant the expending of significant political energy.

Similarly, on the issue of Brexit, the same lumbering slow motion movements are evident as it is clear that Corbyn’s heart is not set on remaining within the European Union. He may have solid and principled reasons for this. He has rejected calls for another referendum, thereby receiving a good deal of flak. A healthy dose of pragmatism, that is not opportunism, should not harm a conviction politician.

It was a cricketing metaphor used by once loyal Margaret Thatcher lieutenant Geoffrey Howe, who served her as Chancellor of the Exchequer, Foreign Secretary and Deputy Prime Minister that was the undoing of the more long lasting Thatcher government in November 1990. In response to Thatcher’s own clumsy recourse to a cricket metaphor, when like Theresa May’s Geoffrey Boycott analogy, she claimed that she was ‘still at the crease’, Howe suggested that the way Thatcher as team captain had treated her opening batsmen was like breaking their bats even before the first ball is bowled.

Theresa May’s use of her own cricket metaphor should signal the end of a much shorter innings.

Ominously, the issue both times was Europe.

Also read: The great ruin of Britain has begun

#Margaret thatcher, #Britain, #Brexit, #Theresa May
The views and opinions expressed in this article are those of the authors and do not necessarily reflect the official policy or position of DailyO.in or the India Today Group. The writers are solely responsible for any claims arising out of the contents of this article.