On June 23, 2017, they mercilessly beat convict warder Manjula Shetye with sticks, all over her body and head. She was stripped naked, then two of the accused, Bindu and Surekha, held her legs apart and Waseema shoved her lathi into Manjula's private parts.

Nirbhaya and Byculla - similarities and differences

It is, however, the differences, rather than the similarities, that make the June 23 crime all the more chilling and horrific. The Nirbhaya convicts were all poor slum dwellers, who well knew that the crime they were committing had no social sanction and that they could have the might of the State upon them and likely face its consequences.

The Byculla killers, on the other hand, were middle class employees, who had been tutored and mentored to wear such violent crimes as a badge of honour, who were assured that the whole state machinery would not only protect them from any consequences, but also likely shower them with accolades.

Events so far show that their confidence in the state apparatus has not been misplaced. The office of the topmost prison official of the Mumbai Metropolitan Region – the  Special Inspector General of Police (prisons), southern region – literally overlooks the prison where the crime openly took. The murder took place under its oversight, its cover-up also would.

Manjula was brutalised in two installments. First, around 10.30 am, when she was called to Pokharkar's office regarding her complaint of shortage in the supply of eggs and paav loaves and was viciously beaten and dragged by her hair, with her sari pulled round her neck, back to the barracks. The second round in the afternoon was a lengthy torture session, including stripping, sexual abuse and assault.

Sushma Ramteke, a former Byculla Prison inmate and victim of jailor brutality, recounts how the office, which is at some distance from the barracks, was the jailors' choice locale for beating recalcitrant prisoners into submission.

While what transpired there will remain disputed, it seems the jail administration felt that a public power display was required to not only cow down Manjula further, but also to terrorise the prisoners who were objecting to the shortages and the corruption it implied. 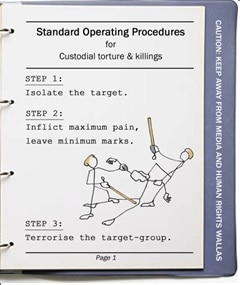 Jails in Maharashtra have an afternoon bandhi lock-up period between noon and 3pm, when all inmates are locked in their cells or barracks. It is at this time the torture team opened the locked barrack where Manjula was lodged and attacked her for the second time.

The torture team was only keeping to a standard operating procedure that is commonly followed throughout the country's prison system: ensure that all prisoners have been locked in, perform the torture in view of those you want to terrorise, prevent both victim and captive audience from opening their mouths to the outside world.

It was as per this modus operandi that Manjula was tormented for over an hour and then left bruised and bleeding in the midst of the barrack as a lesson for all. Though it must have been amply clear to all the jail staff on duty that Manjula was in dire need of hospitalisation, the rule of silence in the jail torture protocol ensured that even the most sympathetic jail employee would not lift a finger.

A prisoner injured by torture is supposed to be denied medical aid, particularly outside medical help, until the wounds and bruises subside a bit, at least to the level of plausible deniability. If the prisoner dies in the meantime, then no problem - dead men (and women) tell no tales – and there is a highly accommodative and cooperative medical and law enforcement fraternity out there, who are willing to oblige in the cover-up. This is just what happened on the night of June 23. It was only after the prisoners had been locked up for the night and after Manjula was clearly dead, that the jail medical officer was called to examine her lifeless body.

She was sent to the JJ Hospital, the principal government medical facility in Maharashtra, which is barely a kilometre away from the jail. She was declared brought dead. The first story given out by the jail administration was that Manjula had suffered a heart attack.

The prison medical officer, Dr Khan, is a qualified pediatrician, with around a decade of service at Byculla Prison, as well the much larger Arthur Road Central Prison. He has had a rich experience of examining jail torture victims over the years. There is no way he could have missed the severe bruises on Manjula's body and scalp and mistakenly thought it to be a case of cardiac arrest.

But there is also no way the heart attack story could have been given by the jail officialdom without the assured connivance of Dr Khan. Thus, the good doctor and the good jail superintendent (Shri Indurkar, a 2016 President's Meritorious Correctional Service Medal awardee, who was in Pune on the day of the murder) and quite probably the good Special IG Prisons next door (Shri Rajvardhan Sinha, a 2014 President's Meritorious Police Service Medal awardee) came together to make up a story of heart failure in order to cover-up the murder by jail employees.

The JJ Hospital authorities did not show any signs of contradicting this false heart attack story, nor did the police register any FIR till well after a very public agitation broke out from the prison inmates themselves.

The bruises and bleeding on the body had been disclosed in the police inquest panchnama itself, so there could be no valid reason for the hospital to delay the postmortem for almost 24 hours and for the police to delay the investigation and FIR for a still longer time. The delay can only be explained by an apparent readiness to collaborate in the cover-up conspiracy.

Inmates' protest brings out the truth

It was only the creative means that the women prison inmates adopted the next morning to publicise the murderous truth that put paid to the criminal collusions of the state organs. The Byculla jail is situated on Clare Road, a busy Mumbai artery, swarming with traffic for over 20 hours in a day.

The next morning, women climbed up on the terrace on one of the barracks that overlooks the road and managed through screams, banging of plates and burning of papers to attract the attention of passers-by and traffic.

Videos of the protest were taken from the road and started appearing in the electronic media. Male police were brought in for lathi-charging and beating the protesters into submission. All this forced the jail, police and hospital authorities to give up their plan of a total cover-up. Plan B of Operation Cover-up is now in motion. The Addl DG Prisons announced the suspension of six jail employees for dereliction of duty and ordered an inquiry by the prison department led by DIG Prisons, Swati Sathe. While the macabre irony of referring to rape and murder as "dereliction of duty" was lost on the Addl DG, it was left to DIG Sathe to make clear, by her subsequent statements, that her inquiry was targeted not at tracking and tackling the violence of the murderers, but at nailing and punishing those who had brought these crimes to light.

The JJ Hospital authorities, despite having senior forensic professors available, assigned such a sensitive postmortem case to two trainees and a lecturer, who have not expressed an opinion on the sexual assault and the jail story of heart attack. The police, while being forced to register an FIR for murder, have not applied the sections pertaining to sexual assault and misuse of official position that are apparent from the complaint, nor have they shown any sign of investigating the larger conspiracy of the other staffers and seniors, who have backed the killers and covered up for them.

They even inordinately delayed the arrest of the torture squad by six days, giving them ample opportunity to fabricate a story, while even going missing to seek anticipatory bail. They have also imposed a case of rioting and criminal conspiracy on all 291 women jail inmates.

As it would be absurd to assume that each and every woman inmate, several having infants and children with them, could have conspired and participated in rioting, this move seems more as a move to silence potential witnesses.

The jail administration is also doing its bit by following Saturday's lathi-charge with further threats of beating, mass punishments and jail transfers. As Operation Cover-up proceeds full steam ahead, the man who must be in the know, Maharashtra CM and home minister Devendra Fadnavis declares benignly, "Whatever the truth is, it will come out soon".

Policy of condoning and rewarding perpetrators of custodial violence

Thus, despite the best efforts of the women prisoners of Byculla Prison, the likelihood of Justice for Manjula remains a distant dream. Three of the accused - Bindu, Surekha and Waseema - were named in March 2012 in a complaint of assault filed in court by political prisoners Sushma Ramteke, Angela Sontakke and Jyoti Chorge. Surekha and Waseema again figured in an assault on Ramteke and another Bangladeshi pregnant prisoner in November 2013.

After a fact-finding report by the Committee for the Protection of Democratic Rights (CPDR) and a complaint in court, an inquiry was ordered by the court, which remains pending. This "lax" approach of courts possibly encouraged them to new heights of cruelty.

Such condoning of custodial torture and violence however extends right up to the topmost levels of the judicial arm of the state. DIG Swati Sathe herself was indicted by the Bombay High Court for one of the most violent planned attacks on prisoners in Mumbai in recent times, when she was superintendent of the Arthur Road Central Prison in June 2008.

An inquiry into the attack by the principal district and sessions judge, Mumbai, had found that she had used excessive force for extraneous reasons and the high court had ordered criminal proceedings against her. However the Supreme Court, while paying lip service to the bane of custodial excesses, retracted the high court order and left it to the state government to decide whether or not to proceed against Sathe.

This was done by the apex court knowing full well where the State’s sympathies lay. The government had, during the pendency of the appeal against the high court indictment, already rewarded her with one of the earliest promotions of a prison cadre official from superintendent to DIG. With Sathe now in the lead of Operation Cover-up, the likelihood of the Byculla killers being applauded with similar career advances is firmly on the cards.

Also read: How does a Kashmiri woman tell the world her story of rape and sexual violence by security forces?