How a delta ravaged by Cyclone Amphan awaits a revival

As if Covid-19 was not enough, Amphan has damaged infrastructure, rendered many homeless, and imposed a cost on the West Bengal economy whose indelible impacts will be felt in the long-run.

I am writing this in my apartment in South Kolkata, in the midst of the ravages that Super Cyclonic Storm 'Amphan' has left on May 20. As I write, Bengali news channels are reporting on the joint inspection of the affected zones by PM Modi and West Bengal CM Mamata Banerjee.

The cyclone that hit the Ganges delta, more specifically southern West Bengal, has impaired the working of the socioeconomic processes of the eastern state: lives are lost despite adequate precautions (that were helped by substantial improvements in the early warning systems), and the property losses are immeasurable! As if Covid-19 was not enough, Amphan has not merely damaged infrastructure, rendered many homeless, and affected small businesses, but has imposed a cost on the West Bengal economy whose indelible impacts will be felt in the long-run. 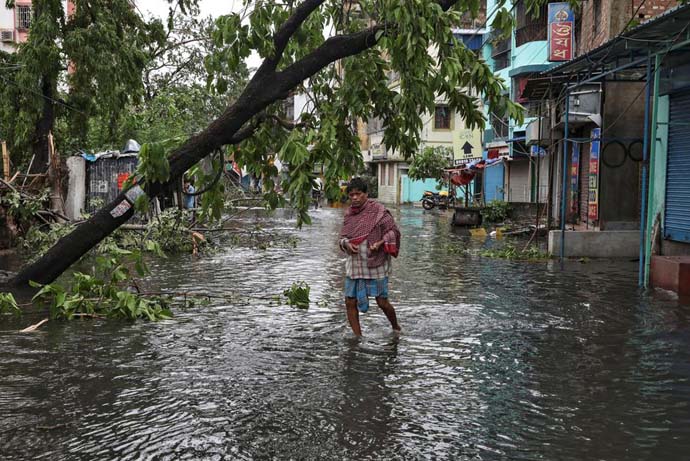 Cyclone Amphan has magnified the fact that sustaining human habitat in the vulnerable regions of the delta is not advisable. (Photo: Reuters)

The impacts of global warming and climate change in the ISD is symptomatic of the impacts in low-lying, densely populated coastal areas, where the sea-level rise and frequent storm surges create havoc for human habitat. It is common to find that in some of these agrarian societies, salinity intrusion makes agriculture infeasible, and leaves practically no other viable means of livelihood.

ISD is no exception! The fact that the Bay of Bengal has registered a steep increase of 26 per cent in cyclone intensification rate over the last hundred years bears ample reasons to believe that that tropical depression forming in the Bay of Bengal has a high probability to reach to severe cyclone stage. The delta, which encountered an increase in Relative Mean Sea Level (RMSL) of the Bay of Bengal at the rate of 8 mm/year over the last 50 years, has been witnessing regular instances land-loss and disappearance of islands. The proportion of high-intensity events (cyclones) appears to be increasing, possibly as a result of rising sea surface temperatures. The 2009 Aila supercyclone made many realise that the existing infrastructure of the coastal Sundarbans is not sufficient to combat a gigantic disaster. Amphan, being even more intense, magnified the fact that sustaining human habitat in the vulnerable regions of the delta is not advisable.

Due to better early warning systems, the state government moved thousands away from the vulnerable zones during Amphan. Rendering the same vacated space habitable is a bigger challenge, and space will remain vulnerable to such extreme events in future. One must realise that "in-situ" adaptation modes are failures from a long-term perspective. One needs to think of "managed and strategic retreat", which I argued earlier in one of my columns.

In "The case for strategic and managed climate retreat" (August 2019, Issue 6455), published in Science, Siders and his co-authors postulate, "…a narrow conception of retreat has limited decision-makers' perception of the tools available and stilted innovation…. By reconceptualising retreat as tools used to achieve societal goals, communities and nations gain additional adaptation options and a better chance of choosing actions likely to help their communities thrive". In my recent co-authored paper, "Managed retreat" in the Journal of the Indian Ocean Region, we suggested managed retreat should be thought of as an adaptation option if three conditions are satisfied: a) socio-economic wellbeing under the business-as-usual (or status quo) is diminishing, b) cost of in situ adaptation is higher than the business-as-usual scenario and c) net current value of ex-situ adaptation (or strategic and managed retreat) is highest of all the adaptation scenarios. These are set to be the benchmark conditions of a decision framework we term as Generic Adaptation Decision Framework (GADF).

There were clear indications that in the ISD, the community's well-being is getting diminished over time; the in-situ adaptation modes in the forms of accommodative infrastructure like embankments are proving useless in the long run, and the net current value of ex-situ economy is highest among all adaptation options. The validity of these conditions was magnified again with the onset of the large-scale disaster that was brought about by the Amphan. Therefore, from our GADF perspective, with all conditions satisfied, clear economic rationales for the managed retreat are in place for ISD.

Policymakers and politicians in India do not seem to understand the strategic dimension of managed retreat. Many express infeasibilities of such options perceiving population movement as a conflict-prone process. One must understand that this should be undertaken as an organic and participative process, with the understanding that the long-term benefits way outweigh the costs.

Also read: I was marooned by Cyclone Vardah. My ten hours of helplessness