I lived through Cyclone Amphan in Kolkata. It has humbled us all

If you were any better off than anybody else at this time, it was only a quirk of fate, and nothing around seemed very safe or the same anymore.

The last three days, since Cyclone Amphan struck, have been a time of calamity and anguish. Never in my life have I seen anything of the kind, though monsoon floods and the tempestuous nor’westers are nothing new in this part of the world. I remember a particularly bad time of floods from my childhood, some thirty years ago, when from the rooftops we could see dead animals floating in the water, and desperate people wading through the water-filled streets to fetch supplies. And the occasional droning of relief copters flying over our house. I don’t remember which year that was.

And having lived in these parts, we Calcutta folks, the city-dwellers, are pretty well-accustomed to the periodic news reportage of floods and storms wrecking the neighbouring districts and villages, but those miseries of people have been distant, something belonging to other places marked by the fragility of lives and livelihood, and poverty and suffering. We living in the city in our pucca houses and high-rises were more insulated, or so we thought: The reason why the shock of this monster cyclone has been as much physical in its damage and destruction, as it has been mindboggling and completely overwhelming.

We all felt the windowpanes shake, doors rattle as if by the force of some invisible hand, and the fury of the raging sky and winds as we huddled inside our homes. Some of us tried to go about this or that chore or thing that we are used to doing at this or that time, trying to discount the enormity of what was happening, because we were not among the faint-hearted, we told ourselves. And because life does go on after all, and tomorrow was going to be a new day. 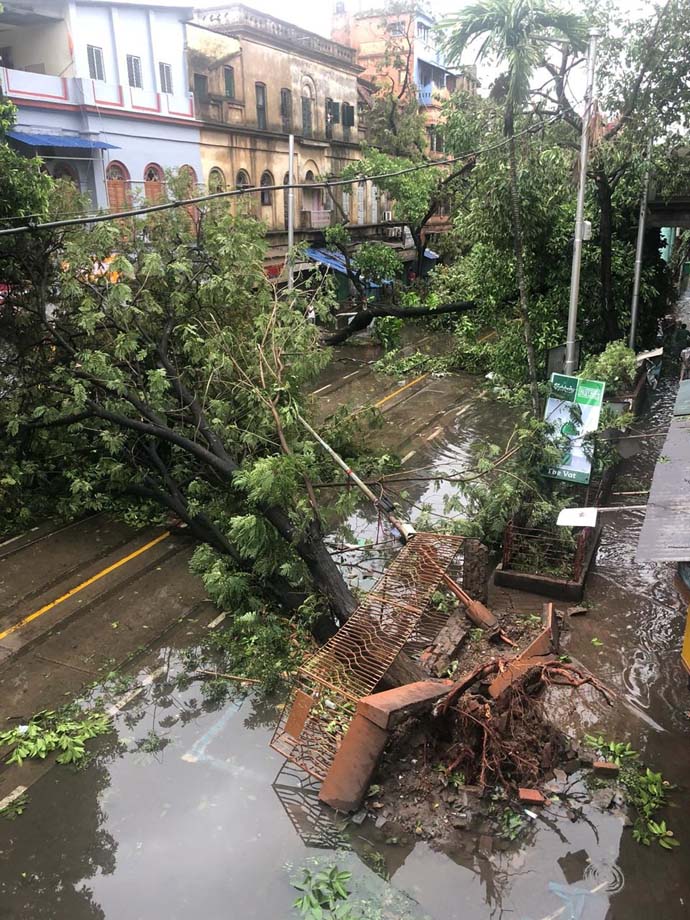 Without power and connectivity, and the more basic, clean drinking water, people were also dealing with fallen overhead wires and threats of electrocution, and trees precariously fallen on or in front of their homes. (Photo: Author)

Only, life did not go on like it did. For most of us waking up the next day, life went on to take unprecedented new meanings. Trees had come down in most parts of the city, completely altering its appearance. As the visuals started to come in, pictures clicked on their phones by people from their rooftops and verandahs, or by a few who had ventured out of their homes onto the streets, the hugeness and irreversibility of what had struck us sunk in.

Entire streets looked like jungles; Park Street, Louden Street, the area around the Lake in South Calcutta (which after two days, had to be cleared by the Army) were unrecognisable. The Race Course and the area around Victoria Memorial, which was one of the few tree-lined and green spaces in the city, had lost much of that cover.

And then, even before the more comprehensive media coverage had emerged, social media registered the angst of people. Without power and connectivity, and the more basic, clean drinking water, people were also dealing with fallen overhead wires and threats of electrocution, and trees precariously fallen on or in front of their homes. Smashed window panes and gates, cars, and crashed electric poles. Those with small children and the elderly in their homes suffered the most. Someone I know walked three streets in search of bottles of water for her little boy because their water supply at home had run out.

While some parts of the city were back on their feet at the end of Day 1 after the cyclone, others endured the misery. And for those that did get back their lives sooner than others, it seemed no solace. None at all. Because if you were any better off than anybody else at this time, it was only a quirk of fate, and nothing around seemed very safe or the same anymore.

Coming in the midst of the raging pandemic, which already had our nerves frayed, the devastation brought on by the cyclone seems to have altered our priorities overnight, or at least made us reassess them. We seem just more content if we are able to stay in touch with the rest of the world, ever so thankful for the technology that allows us to do so, and for the things that we really have taken for granted. 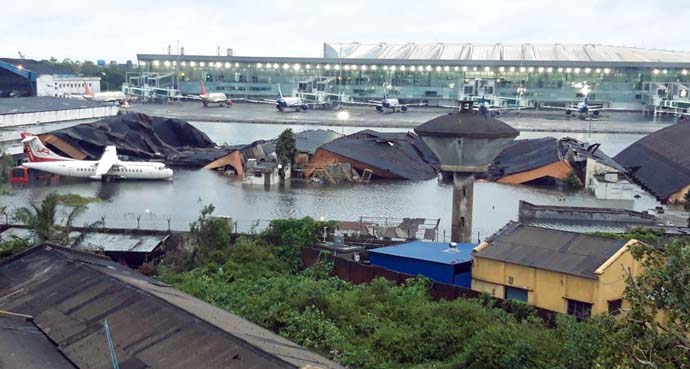 The complaints have been many. Social media is inundated with them. People losing their patience and frayed nerves are not unexpected. What, however, is also emerging, is people standing up to come to grips with this humongous crisis, squaring their shoulders, and coming out into the streets to get their lives on track, and also the lives of others who have been thus affected. Elderly citizens have joined hands with disaster managers and civic-body workers to clear the streets. Men and women have lugged and pulled tree trunks. People left without electricity have still cooked lunch and fed the workers working through the day in their neighbourhoods to clear the streets.

Calcutta and Bengal have had a ‘para’ or neighbourhood culture that it has prided itself on. The para was like an extended family, which organised Durga Puja, played cricket matches, did occasional welfare work, and the para folks would always look out for each other. That same para culture has dissipated somewhat over the last two decades, with people moving out of their old neighbourhoods into new high-rises, and with many parts of the city being revamped and redeveloped into brand-new spaces.

The para is now a thing of yore, and a new set of individualist and newer age values, and new consumerism is ours now, or so it had seemed. But quite suddenly, and almost overnight really, that ‘para’ spirit of brotherhood of our childhood, and other fathers and grandfathers is back again. People holding the hands of their neighbours, taking care of other people’s children, cooking and feeding people from two houses down. Checking in on people in other zones of the city, and trying to make better use of our own resources to get some respite to them.

Almost like we were back in another era, of nationalist ideals and aspirations. Of a time when women would throw off their jewellery from rooftops as contributions to the nationalist cause. Of greater empathy, understanding, unselfishness and compassion, because we have together endured something which has humbled us all.

Also read: How a delta ravaged by Cyclone Amphan awaits a revival

#Coronavirus pandemic, #West Bengal, #Kolkata, #Cyclone amphan
The views and opinions expressed in this article are those of the authors and do not necessarily reflect the official policy or position of DailyO.in or the India Today Group. The writers are solely responsible for any claims arising out of the contents of this article.

Sharmistha Gooptu is a writer and historian of cinema. Her recently published novel Menoka Has Hanged Herself is set against the film industry of the 1930s.