Mithila paintings: How Dalit women have used art to reclaim their identity and their stories

A scene from the Ramayana, in the Mithila painting style.

Dalit art has evolved as a mode of resistance and protest, along with an attempt to historically trace the origin and the seriousness of caste discrimination. Dalit artists across India have picked up themes that invoke contemplation, and are a representation of critical issues of domination, discrimination and oppression, and their triple burden as faced by Dalit women. 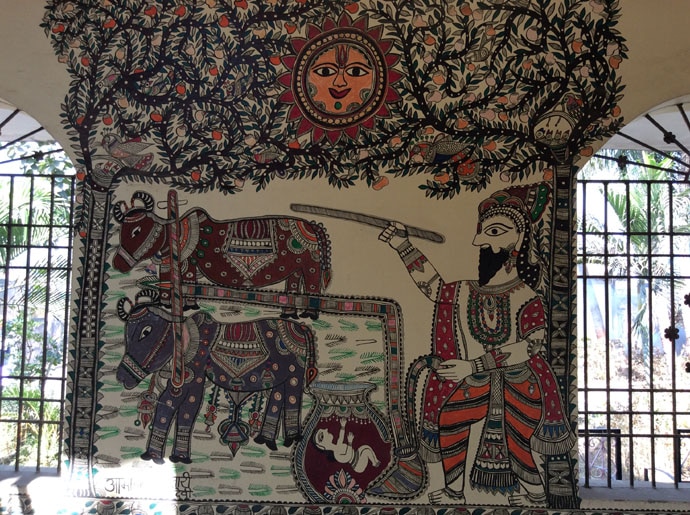 A scene from the Ramayana, in the Mithila painting style. (Photo: Aditi Narayani)

In the region of Mithila in Bihar, women from two sub-castes among the Dalit community — the Dusadh and the Chamar — mastered the art of Mithila painting, which was different in theme and style from paintings by upper-caste women.

The credit to Dalit inclusion in Mithila paintings goes to a German anthropologist, Erika Moser, who inspired and guided Dusadh women back in the 1970s to embrace the art and start writing a new chapter of their social recognition and economic independence.

Moser, also a film-maker and social activist, persuaded the impoverished Dusadh community to paint. The result was the Dusadhs capturing their oral history — such as the adventures of Raja Salhesa, and depictions of their primary deity, Rahu — in bold compositions and figures based on traditional tattoo patterns, locally called Godna. This added another distinctive new style to the region’s flourishing art scene.

With the financial support of author Raymond Lee Owens and Moser, who also donated land in Jitwarpur for the purpose, the likes of Dr Gauri Mishra spearheaded the setting up of the Master Craftsmen Association of Mithila in 1977. This association was very active during the lifetime of Owens, and worked in tandem with the Ethnic Arts Foundation of USA.

As time went by, this art and its practice gave a lot of confidence to the hitherto downtrodden members of the Dusadh community, raising their self esteem enough to participate in more empowering political movements and discourses.

This style of painting was started by Jamuna Devi. It basically involves giving the paper a light gobar (cowdung slurry) wash, which emparts a beautiful sullied look and feel to it, on which bright colours come out very beautifully. From the caste perspective, it’s important to note that unlike other scheduled castes of Jitwarpur village like the Malis, the Pasis, the Doms, and the Dhobis, who all stuck to their traditional professions, the Chamars and the Dusadhs have forayed into Mithila painting as a full-time profession.

Jamuna Devi thus started a new style of painting, which in due times attained huge recognition and demand in commercial markets, besides being emulated by painters from upper castes. Holi colors on cowdung-washed paper imparted an unusual brightness to her paintings, shooting Jamuna Devi into prominence. Her mud frescos and paintings reserved a place in big exhibitions in Japan, New Delhi, Patna and Varanasi.

Men from the region were also instrumental in helping women produce their masterpieces, by making them better acquainted with their cultural history, and with their gods and deities, like Salhesa and Rahu. Two such men were Ramvilas Paswan from village Laheriagunj and Roudi Paswan of village Jitwarpur.

Another important subaltern art form is that of Godna, or tattoo paintings. The evolution of this art can be traced back by studying the rituals and habits of the Nat community. Natins, the women folk of this community, have been master tattooers for generations. Dalit women from Bihar have used Godna as an idiom for Dalit emancipation, which they explain in terms of annihilation of caste and the restoration of manuski (dignity to themselves). 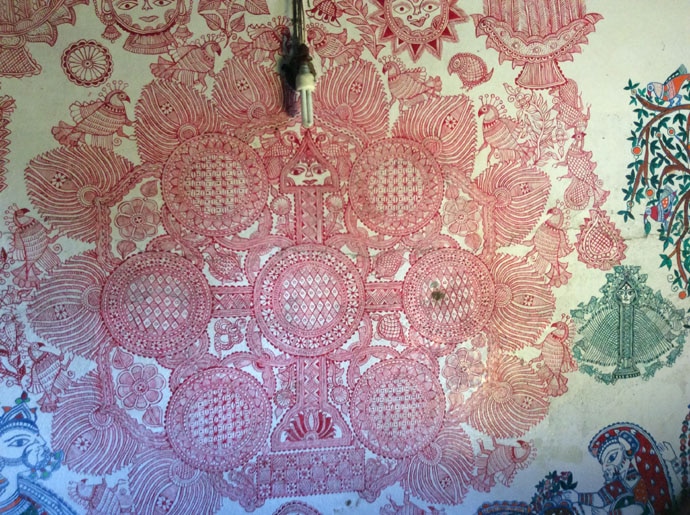 A kohbar — paintings done on the inside walls of houses in the region. (Photo: Aditi Narayani)

Godna patterns, particularly in Bihar and Bengal, were drawn as markers on bodies of prisoners, as well as upper castes. Historian Claire Anderson researched and claimed that most of these tattoos were made by lower-caste illiterate women, who drew creative patterns and numbers on the orders of the imperial authorities.

However, the history of Godna also lies in the discrimination suffered by Dalit women, who were forced to wear ornaments of iron and other inferior material only, as prescribed by the Manu code. Tattooing was in a way a flouting of that prescription. Godna, thus, became for Dalit women not just the inversion of markers of identification, but also an attractive medium for forms of subaltern expression.

The early designs of tattoo paintings were simple black-and-white figures, and mostly revolved around auspicious images and icons thought to be lucky in the Nat community. This is where the contribution of Chano Devi, the early star of Godna paintings, is remarkable. Roudi Paswan, her husband, played a significant role in the evolution of the art form. Under her husband's guidance, Chano Devi started depicting through her work the life history of Salhesa, adding meaning to the tattoo patterns. She also experimented with natural colours in order to create a more distinctive style. These colours later became the main identifier of Dalit Godna paintings. Soon, other painters too started to abandon the use of Holi colours in favor of natural colours, and thus, a new full-fledged style of colourful Godna (tattoo) paintings was born. These natural colours mostly came from a cow-dung base, mixed with leaves, flowers, vegetables, barks and roots.

The journey of Dalit paintings, thus, firmly established Dusadhs and Chamars in the field of folk art, and created a distinct social space for them in the cultural hierarchy of the society.