The more we pretend the caste system is on its way out, the more we ensure its entrenchment.

In the past week, three Dalit boys were thrashed, stripped and paraded naked in Maharashtra because they dared to jump into the village well to escape the heat. In neighbouring Gujarat, a group of men got together to thrash a 13-year-old child because he was “wearing mojadis despite being a Dalit”.

In the 21st century, in the new, shining, digital India, the boys were shown their centuries-old “place” in the social hierarchy, and Indian society, a mirror. Two years later: Despite the nationwide outrage, culprits of the Una flogging are yet to be brought to book.

The Maharashtra incident took place on June 10, but came to light only after people with more social capital than the victims shared it on social media. In the Gujarat case, the boy’s family was too scared to approach the police, and had to be counselled into filing a complaint.

In all likelihood, these incidents will be flashes in the social media pan, before they are doused by centuries of apathy, and also, an undeniable sympathy for the mentality that perpetrates such acts.

Only in May in Gujarat, a Dalit man was flogged to death because he was suspected of theft. In the same state, in the same month, upper castes beat up a Dalit man because he had added “Sinh”, a Kshatriya surname, to his name on his social media profile.

Before that, Dalits have been thrashed - even killed - for the 'crimes' of sporting moustaches and attending Garba events in Gujarat.

In Uttar Pradesh, a Dalit man’s marriage was prevented because upper castes could not stomach the idea of him riding a horse to his wedding. The Saharanpur riots were triggered because Rajputs objected to a statue of Dr Bhimrao Ambedkar, as his “raised finger would point towards their women”.

In all these cases, the Dalits were in no way in conflict with anyone. Wearing shoes, riding horses, sporting moustaches puts them into no competition of resources or capital with other caste groups.

But what it does is deeper than that – it threatens to disrupt the world order as Indian society knows it, where Dalits are meant to 'serve' the upper classes, and do it meekly.

As modernisation and liberalisation create their own classes of the disadvantaged and take away tangible manifestations of their superiority – land, money – from some upper class groups, they then hold onto the trappings even more fiercely.

Any Dalit making pretensions to what had been their prerogative – leisure (attending garbas), pride (moustache, horse, dressing well) – has to be struck down, surely and swiftly. This attitude is by no means limited to rural societies alone. In the most posh of circles, Dalits most often exist only as 'projects' to be patronised, not equal humans to be fraternised with. 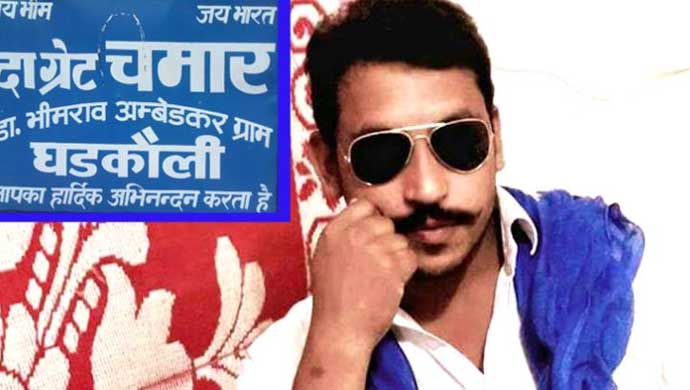 The assertive, aggressive Dalit leader Chandrashekhar Azad Ravan has been in jail for a year, booked under the NSA.

These conflicts, and these causes, have existed for millennia. However, in the past few years, such clashes have gone up.

A 2017 report by the US Commission on International Religious Freedom (USCIRF) says: “In particular, since 2014, hate crimes, social boycotts, assaults, and forced conversion have escalated dramatically.”

Of course, the ruling BJP cannot be directly blamed for having a hand in these incidents.

However, perception matters, and through various acts of omission and commission, the BJP has given legitimacy to the view that it is primarily a party of, and for, the dominant castes.

The RSS, the ideological parent of the BJP, has a vision of a 'Virat Hindu' society, in which Dalits occupy a decided, and decidedly, lower position in society. Just a few months ago, BJP leader and UP minister Rajendra Pratap had said “party leaders were blessing Dalits by dining with them, just as Ram had done with Shabri”.

Actions speak even louder than words.

The flogging of four youths in Gujarat’s Una in 2016 had sparked off a nation-wide protest. Yet, the culprits have not been brought to book, and in April this year, two of the youth were beaten up again by one of the accused who was out on bail.

Another telling factor is the treatment of Chandrashekhar Azad ‘Ravan’ by the Uttar Pradesh government. Ravan displays the assertive, aggressive brand of Dalit leadership, whose agitation is not just for equality, but for pride. He has been in jail for a year now under the stringent National Securities Act (NSA), which was slapped on him the day he got bail, and then extended.

Coupled with this, the Supreme Court recently changed provisions of the Scheduled Castes and Scheduled Tribes (Prevention of Atrocities) Act.

In a society already struggling to accept Dalits’ assertion of identity and demand for equality, such actions from those in power send signals that the system is sympathetic to the upper castes’ cause.

The government needs to act fast to counter this perception.

'Sabka Sath, sabka vikas' sounds criminally hypocritical in a world where 13-year-olds are thrashed for their choice of shoes.

Also read: A bold new stand: Why Rahul Gandhi is ready to take on the RSS