An ode to joy: Why ‘Dancing Uncle’ is such a ray of hope

Sometimes — not often, mind you — the internet provides unfiltered joy. Like last week, when something really weird happened. A campy-looking video of a middle-aged man, dancing his socks off to an old Bollywood song began circulating.

“Dancing Uncle” — a man possessed, a man moving to the beats of the music with a kind of physical freedom and grace that remains aspirational for the best of us — became an internet sensation.

Everyone loved it for all the right reasons.

Here’s the thing: meme culture, which is usually what makes things go viral, is objectively a terrible thing. At its heart lies a spirit of mockery and misanthropy. It’s been designed for and by jaded and unhappy people, so that they can feel better about themselves by laughing at others. Steeped in elitism, intellectual dishonesty, condescension, ironic facades, and really, just a lot of genuine comedy too (admittedly), meme culture often throws us these little gems of un-self-conscious exploits of not-hip people, for us to point at and laugh. Just as often, it ruins the victims; they’re forever tagged as “that guy” in “that video”. 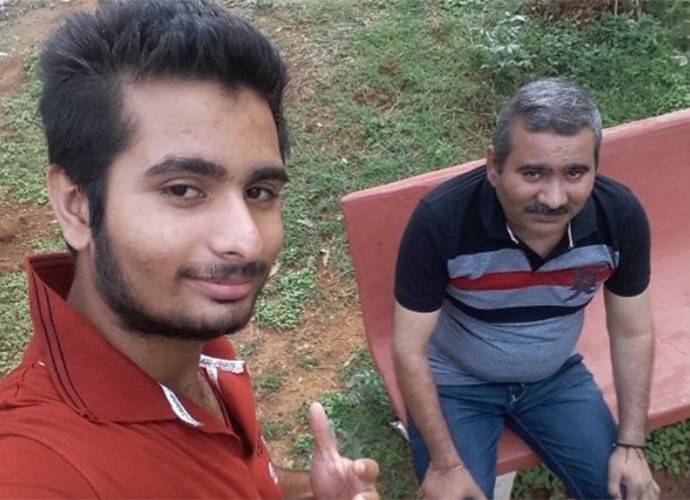 Durgesh and his disabled father Sanjay became the subjects and the victims of a series of vicious memes last year. [Photo: Reddit]

Occasionally, though, we’ll get something like Dancing Uncle, which is such a breath of fresh air.

A quick outline first: journalists more dedicated than I have uncovered that it’s a man named Sanjeev Srivastava, a professor from Bhopal, who’s making hearts swoon in the video from a wedding.

Dancing Uncle shares his desire to be on the silver screen. Listen in to what he said. #ITVideoMore videos: https://t.co/Nounxo6IKQ pic.twitter.com/pt4gsghWMm

There’s a stage on which we spot our protagonist, standing alongside his wife. The song playing in the back is a 1987 banger called “Aap Ke Aa Jaane Se” which featured, who else but, Govinda. Govinda and Neelam shakin' it to this number in 1987 were no match for Dancing Uncle. [Photo: Screengrab]

Uncle is ripping it up as he contorts his body to the shifts in the song, switching his steps, mixing it up rhythmically, nailing not just the moves but the choreography and the dynamics too.

And he does it all with a kind of outward swagger that never once drifts into arrogance. He’s just having a blast doing it. As is everyone else — his wife dances on the side gamely, but Uncle is really the star as the crowd hoots.

What seems to have connected with so many people is the innocent joy with which he dances. He’s clearly very good — as per reports, he even won a few awards for his chops back in the day — but that’s not it. It isn’t even that he’s got that ridiculous control over his movements in the same way Govinda did.

Those things do matter, of course — a fair bit.

But what has connected with the nameless, faceless internet gatekeepers here is Srivastava’s happiness. His energy is infectious.

Even through a minute-long video, people are sharing his delight vicariously. He’s that friendly Indian uncle at every single wedding that’s ever happened anywhere, except without the drunken slurs, the creepiness, the invasion of personal space, the all-round obnoxiousness. What’s resonated with so many is his purity.

It’s like that video which showed up some time ago, of a person bursting into laughter in a train compartment. That initial laughter cracked someone else up. And then, a third. Pretty soon, the whole bogey was cackling gleefully. Laughter begets laughter, joy begets joy.

Dancing, at its core, is such a primitive form of self-expression. You hear something you enjoy, and you shake your body wildly to heighten that feeling. There’s a physical, visceral sense of pleasure attached to dancing. And when you see someone with the kind of enthusiasm and passion that Dancing Uncle has when he’s in the Zone, it’s hard to not smile and feel genuine happiness.

It’s such a feel-good story. There’s been a near-unanimous appreciation of his gifts, and now we’ve reached stage two of the life-cycle of a news story — copycat versions. Yes, I’ve come across videos of people imitating Srivastava’s moves on the internet. The best part is that Srivastava now exists on Twitter, as do a host of fake accounts, and he’s posted photos of himself with Sunil Shetty, as well as a video of Govinda himself offering him compliments in a news segment.

He’s doing heavy press; he’s become a legitimate celebrity for the time-being (he’s minting it, and why the hell not?).

It’s a welcome change from the constant stream of depression, aggression, made-up nonsense, and po-faced irony we’re fed everywhere in the news. Dancing Uncle dances through the bullshit, reminding us that there’s a crumb of hope glimmering from beneath all the muck.

Also read: Criticise Rahul Gandhi for his politics, but not for being a dutiful son