The support from the unlikely corner means a lot, especially when it took PM Modi so long to break his silence on the heinous crime.

If resistance to power is necessary, so is the power to resist.

So, when British actor and UN women's goodwill ambassador Emma Watson extended her support to Deepika Singh Rajawat - the lawyer representing the family of the eight-year-old victim of rape and murder in Kathua - the latter couldn't have felt more empowered.

More so, when the feisty young lawyer has been facing strong backlash, including life threats, in her own country for taking up the case. What's more, despite widespread outrage over the rape and murder, it took prime minister Narendra Modi days to break his silence and condemn the brutal incident. So much so that the PM's feeble condemnation and "long silence" has been widely discussed and commented upon even by the foreign media.

Watson was reacting to a picture of Rajawat recently shared by Buzzfeed to highlight how the "lawyer has emerged as a force to reckon with" following the Kathua incident. As it turns out, the story found its way to the actor's Twitter timeline.

The image used to share the story shows Rajawat walking out of the Supreme Court of India, flanked by other lawyers, all walking with their heads held high. Watson's tweet offers encouragement to all those fighting to get justice for the eight-year-old Kathua girl's family.

Rajawat, however, downplayed the praise and explained that she would rather see the family of the eight-year-old girl get justice than get recognition for her own work. "I am really honoured. I am humbled and overwhelmed. But I will be happier when the little girl will get justice... This is a kind of encouragement and support. This shows that people are with us and seeking justice for this little girl," Rajawat was quoted as saying in this report. 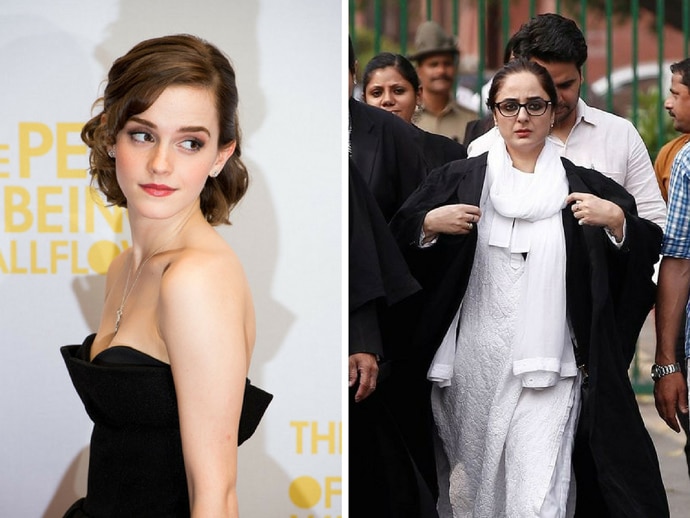 Social media too has also been quite impressed with Watson's support for Rajawat's efforts. Many even took to Twitter to thank the UN women goodwill ambassador for the support.

Thanks a ton, Emma, for all your support and care.

A shoutout from Emma Watson to the Kathua Case Lawyer Deepika Singh Rajawat! Let us raise our voices in unison and make sure something like this never happens again..#KathuaCase https://t.co/qXcysHJK6P

It's very nice n heart warming to see that internationally people like @EmmaWatson support Indian neutral views and appreciate the people like Deepika Singh Rajawat who's fighting for #Asifa There's humanity left in the world.. there's chance that we will win the war 4 humanity https://t.co/abkjZ9fQ1J

However, some took the opportunity to remind Watson that she was making a mistake by supporting Rajawat. Hindutva trolls warned her against losing fans in India.

Dear @EmmaWatsonDeepika Rajawat Is a Blot On Our Country! She Is Sold 2 Break India Forces! Shame On U! Shame On It Half Baked Knowledge. Ur Christian Scums r Fabricating Hindus in False Cases! Lord Ram & Shiva Will Save Us! Go Back 2 Ur Hole.. pic.twitter.com/dAZvFSQhgA

Dear Emma can you please ask to Deepika Rajawat that where is the Money which she and her drama brigade collect in the name of Asifa...?? When everything is free and Asifa's family get nothing then where the hell all MONEY gone...??