A vehicle’s number plate is one of the things that you notice immediately. Usually, the combination of numbers and letters on that plate is meaningless. But if you spot a word on a number plate, it will definitely grab your attention. A Delhi-based girl is facing a similar situation. The combination of the letters on the number plate of her scooty is so unbelievable that she hasn't been able to take the two-wheeler out even once - and it has been more than three weeks.

Mansi (name changed) is a fashion designing student. She travels via Delhi Metro from Janakpuri to Noida. But due to the long travel hours and rush in Delhi Metro, she requested her father to buy a scooty. After almost a year of requesting him, she got her hands on one this Diwali. It was a sweet Diwali gift from her dad.

The number plate for her scooty followed soon after. As per the sequence, RTO assigned her a number plate... and it had the word S-E-X on it. So, her registration number reads DL 3 SEX****. Picture of the number plate allotted to Mansi

As soon as she received the number, people around her started mocking her.

In a conversation with DailyO, Mansi shared a few details. “The aunties of my neighbourhood are calling me besharam (shameless). Everyone around me is bullying me,' said Mansi.

Not just Mansi, her father too had to deal with the consequences. Mansi’s father requested the seller of the vehicle to change the number. Instead of helping them, the seller replied, “A large number of cars and scooters have received such a number, and your daughter is not the queen of the world that she will get a new one.”

To be fair to the vehicle seller, he can't really do anything here.

So when you buy a new vehicle, you need to get it registered at your respective RTO (Regional Transport Office). You receive a registration number, which then adorns your vehicle as an identifier. Now, the RTO registration numbers follow a certain pattern. It is a mix of letters from the alphabet and numbers, and in Delhi right now, the two letters in circulation are 'E' and 'X'. Two-wheelers here are denoted the letter 'S'. So, a new scooty that goes to an RTO for a registration number, will inevitably face this crisis: the number plate will have 'SEX', come what may. Till all the numbers in the 'EX' series are done with. 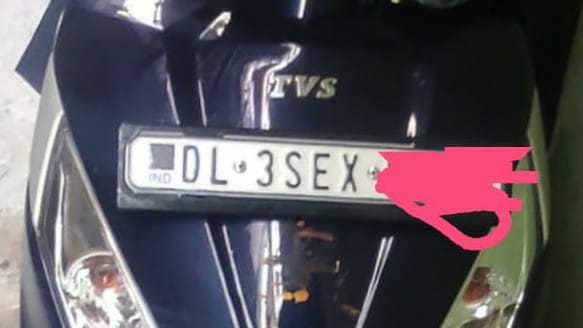 After Mansi's father spoke to the dealer, Mansi too requested him to change the number. He told her that the number cannot be changed as it has been produced online by the Sarai Kale Khan RTO.

HOW UNFAIR IS THIS!

After a year-long struggle, Mansi finally got a vehicle to go to her college in. But her scooty is still locked inside her house. After nasty comments from her neighbours, she is now scared at how her classmates and people on the road will react.

Commissioner of Delhi Transport, K K Dahiya told India Today that the number cannot be changed. “There is no provision to change the number that has been allotted to a vehicle. There is a set pattern that is followed during the process of generating a registered number.”