Shah Jahan gave orders for building a fort in Delhi in 1639AD and entered the “Qila e Mubarak”, as it was named on June 15, 1648. While the fort was being erected, he also had the city “Shahjahanabad” built around it. He encouraged his wives, sons, daughters and nobles to build houses, mosques and parks.

Thus, we hear that Princess Jahanara, the emperor’s daughter, had a beautiful sarai (quarters) called Begum ki sarai (the female royal’s quarters) — where the present-day Townhall stands — and a market called Chandni Chowk designed. According to European travellers, the sarai was a world-class monument in itself.

Prince Dara Shikoh had his haveli built on the banks of the river Yamuna and since it was on Nigambodh Ghat, he called it Nigambodh Manzil. It is here that he undertook the monumental work of having the Upanishads, written in Sanskrit, translated into Persian.

Shah Jahan’s wives also commissioned gardens and mosques: of these, the most famous is Fatehpuri Masjid, built by Fatehpuri Begum, which is just next to Khari Baoli in the Chawri Bazar area. 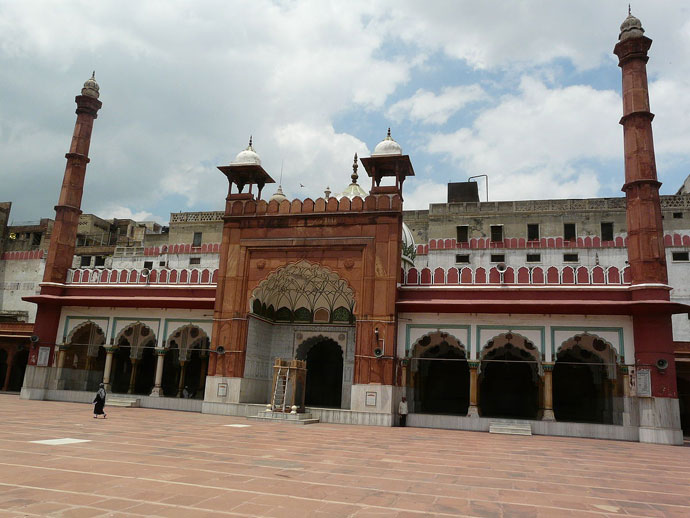 Once Shah Jahan began living in the Qila and the settlers in Shahjahanabad grew in number, he felt the need for a congregational mosque bigger than existing ones.

The location chosen thus was a hillock called Pahari Bhojala, at a distance of 1,000 yards (0.91km) from the Qila. The mosque was planned in such a way that it would cover the hillock in its entirety. To this day, the area of Shahjahanabad is hilly and if one walks down the narrow alleys of the walled city, one can see huge rocks from the medieval time supporting old mansions.

On October 6, 1650, the foundation stone was laid for a Jama Masjid by the emperor himself and it was built under the supervision of Sa’dullah Khan, the prime minister, and Fazil Khan, the khansaman or the head of the imperial household establishments. According to Carr Stephens, the mosque is a specimen of the Byzantine Arabic style.

It was built in six years at the cost of Rs 10 lakh by 6,000 workers. The cost didn’t include the price of the stones that were presented to Basheeruddin Ahmed in Waqeat e Dar-ul Hukumat Dehli by various rajas and nawabs. The red stone is interspersed with stripes of marble and inlaid with black stone. Photo: Reuters

The mosque was set on a plinth of 30 feet; it is 261-foot long and 90-foot wide. Its three marble domes with black stripes are a landmark, an icon of the area if you will, and visible for miles around.

Thus, it was appropriately named Masjid e Jahan Numa — a mosque which commands a view of the world.

It has three huge Darwazas on the east, south and north with more than 30 steps each that lead into the mosque. The west side is, of course, the qibla wall or the wall that is in the direction of the Mecca, which the faithful must face while offering prayers.

The mosque is built of red sandstone from the top to the bottom, with marble used up to the dados. The red stone is interspersed with stripes of marble and inlaid with black stone. Every wall is artistically decorated with calligraphic inscriptions above the eleven arches in the Tughra script, on marble tablets written in black slate.

The inscription on the central arch is simply Yaa Hadi (one of the 99 beautiful names of Allah; it means “O Guide”), while the other inscriptions give details of the construction besides praising the emperor.

A beautiful hauz in the centre of the huge courtyard was built for wudu, the ablution before namaz. The river Yamuna, which is now quite far from Shahjahanabad or Old Delhi, used to flow approximately where MG Road runs now. So, water for the hauz was pumped into it by a Persian wheel situated at a short distance from the mosque in a room that is now kept locked (it still bears an inscription describing its purpose). Even the old iron machinery is visible in the room next to the well, which has been converted into a small workstation by some residents. 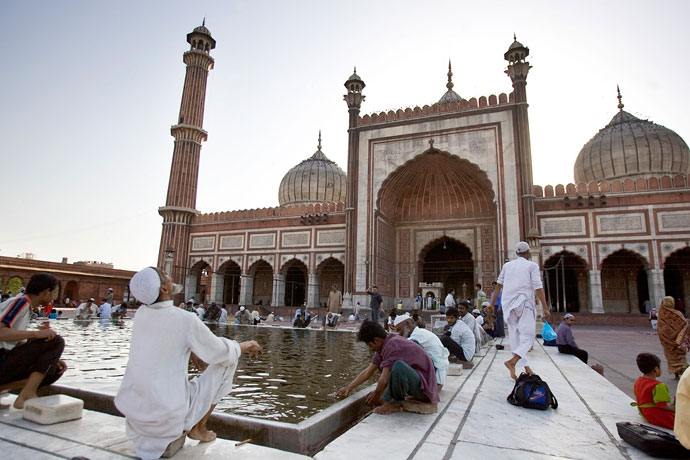 A beautiful hauz in the centre of the huge courtyard was built for wudu, the ablution before namaz. Photo: Wikimedia Commons

On three sides of the courtyard are beautiful corridors and galleries where I have often offered prayers. On all four corners of the mosque are four pavilions with attractive baradaris. During the holy month of Ramzan, the announcement to break the fast is made from one of the pavillions.

There is also a sundial in the southeast to indicate time, but it lies in a decrepit state today. Mirza Salim, the son of Akbar Shah II, built it in 1829 AD. During one of my visits, I saw clothes being hung out to dry on it. A map of the world suffers an even worse fate as people sit on it to get a better view of the mosque.

Jama Masjid has always been a symbol of faith for the Muslims of the country. It was also a focal point for the community living in Delhi. Though it is not the largest mosque in India (that distinction goes to Taj ul Masjid in Bhopal), it is certainly one of the most majestic.

It was inaugurated on the occasion of Eid ul Fitr in 1656 AD, and since then it has occupied a central place in the life of the city. The mosque was a focal point for gatherings during the siege of Delhi in the 1857 Uprising. It was on the walls of Jama Masjid that posters were put up by the forces who were trying to create a communal divide among India's people. These were immediately taken down upon then Mughal emperor Bahadur Shah Zafar’s orders. Maulvi Mohammad Baqar countered these posters in his newspaper The Delhi Urdu Akhbar, in which he said that Hindus and Muslims were "ahl e watan" (compatriots) and had been living together for a thousand years. 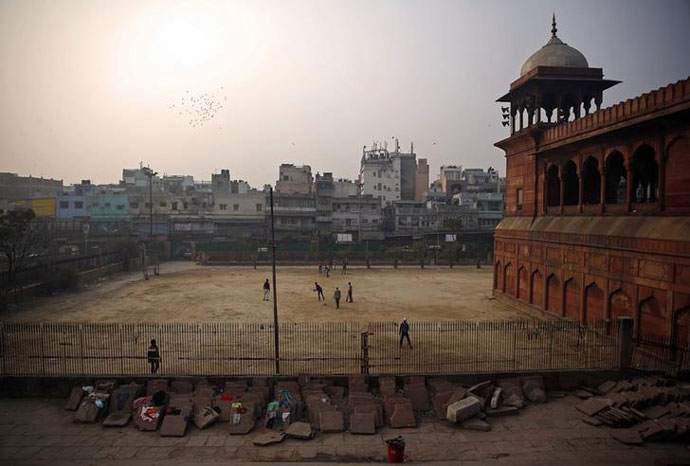 A mosque for the people. Photo: Reuters

Since it had been such a symbol of togetherness and rebellion against British power in 1857, after the uprising, the British occupied the mosque and stopped people from offering prayers within its premises. Its gateways were guarded by British Indian troops to prevent entry. It was used as a mess and horses tied along its corridors, with alcohol being freely consumed by the troops.

As Sadia Aziz writes in her paper Mosque, Memory and State: A Case Study of Jama Masjid (India) and the Colonial State c. 1857, “the Muslim population was specifically targeted as the British perceived the uprising of 1857 as a ‘Muslim conspiracy’ against them.

Consequently, numerous mosques in the city of Delhi were demolished, leaving no trace of their existence. Various options were discussed in higher official circles as far as the fate of the Jama Masjid was concerned.

Plans ranging from its demolition to converting it into a Church or a more ‘secular’ college, floated in the bureaucracy. But finally, the plan to make it as a barracks for the Sikh soldiers from Punjab, who in turn deliberately desecrated its sanctity by undertaking prohibited activities was passed”.

After five years, on November 28, 1862, following innumerable petitions by Muslims, the government returned the mosque to the original inhabitants. A committee was formed for its administration with ten Muslims in it. The British put down many conditions, including that they could enter with their dogs and would not take off their shoes. 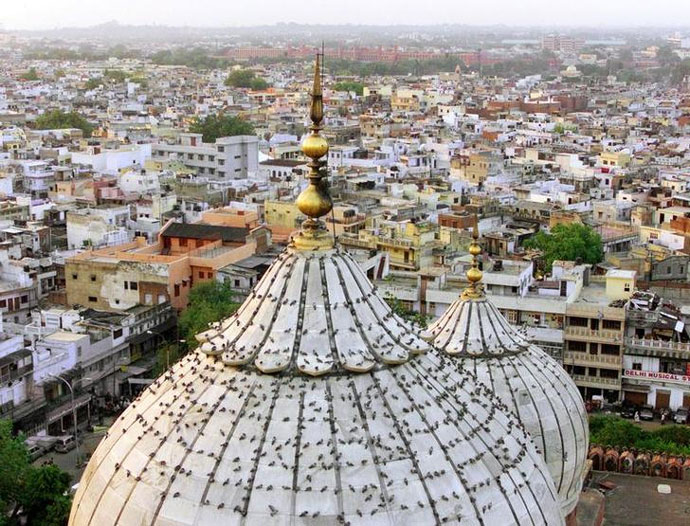 A view of the world. Photo: Reuters

This was a cause of much heartburn among Muslims. It was later decided that no dogs would be allowed inside the premises, and the British would take off their hats but not their shoes, as was the custom in churches.

After many years and petitions, new rules were framed, ensuring that no one could enter the edifice wearing footwear (if at all, they would have to wear covers over them), no dogs were allowed inside, and intoxicants such as liquor — prohibited in Islam — would not be carried into the premises.

In the medieval era, the khutba (Friday sermon) at this mosque was used earlier to validate the emperor’s rule, then to praise the British rule, and today the imam uses it to endorse his favourite political party.

A mosque whose grand gateways were once the lifeblood of the city — with dastangos reciting their stories on its steps and sellers showcasing their unique wares — has now deteriorated to hosting the hawking of cheap material and beggars.

Jama Masjid’s interiors are still grand and every day, the mosque sees thousands of visitors who gather to pray or to just admire its beauty. Though it’s still as majestic, every time I go there, I despair at its shoddy maintenance.