The Delhi Metro Rail Corporation (DMRC) is scheduled to take a final call on the recommendations of the urban development ministry-appointed fare fixation committee, which has suggested over 25 per cent hike in Metro fares - with the minimum and maximum ticket cost rising from Rs 8 and Rs 30 to Rs 10 and Rs 50, respectively.

While the MCD election had made both the central and Delhi government cold about the idea, with the polls out of the way, the road seems clear for the first such increase in prices since 2009.

In an environment where the concept of user-pays has gained increasing acceptance, such a hike may not invite much vocal concern, yet the idea of raising the fares is not as good as it seems on first sight.

A choking Delhi needs more usage of Metro not less

The concept of making Metro users share more of the cost of use must be tested against the prevalence of suffocating pollution in Delhi. The Delhi and central government have been cluelessly scrambling for years to tackle the chronic pollution the city has to suffer.

It's not far-fetched to say Delhi's highest priority has to be a multi-faceted response to bring chronic pollution down. In bringing it down, it is desirable that more and more users shift to Metro rides. But with steep raise in fares, the price incentive to make the shift will be reduced, thereby making Delhi's fight against pollution all the more difficult.

Will make dignified travel more burdensome for those on the margins

A critique of Metro has been that, usually its prices are such that it excludes the urban poor and those on the margins who need the facility of affordable transport most from its services, through what is still relatively expensive fare for them.

But with years of stagnant user fee, the Delhi Metro has become more accessible for the less well off. This accessibility was the stuff of dreams in many cases - dignified travel in air conditioned coaches brought dignity in travel in a nation used to travelling like herd and cattle. It also improved the mobility of the "cattle class" and opened to them hitherto unavailable economic opportunities.

But now with this fare hike (which may also mark a new trend of annual hikes), we will make this dignified travel more burdensome for those on the margins. And many who were cutting corners to make ends meet even while having some dignity in travel, would again be pushed back to their time consuming means of travel - foot and bicycle. 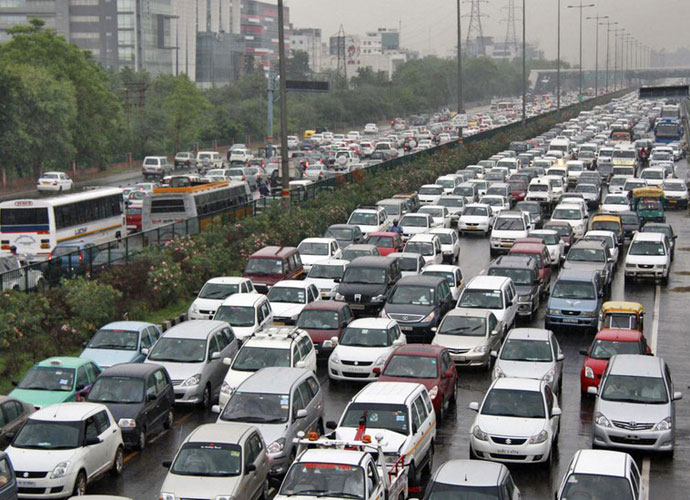 To bring down pollution in Delhi, it is desirable that more and more users shift to Metro rides. Photo: Reuters

May increase still further the traffic nightmare Delhi has to undergo

While most of the well off users are unlikely to mind the over 20 per cent hike, and many conditioned by the "user pays" concept may actually celebrate the higher burden on their pocket as some noble sacrifice for the larger good, yet the decision may also, even if slightly, make the incentive for two and four-wheeler travel stronger.

This may make the dreary traffic situation in Delhi still worse. Also as discussed above, if more of those on the margins shift to bicycles and bus usage, that will further increase the pressure on the roads of Delhi and make an already unmanagable situation worse.

At a conceptual level also, the clamour for market-linked pricing of the Metro is problematic. In Delhi, the government has failed in providing citizens enough transportation means to choose from. The roads are clogged, making car and bus usage taxing. Rickshaw and auto-rickshaws have been poorly regulated and inadequately licensed, thereby creating a demand-supply mismatch and pervasive overcharging.

The aggregated taxies have also borne the brunt of a government that's not up to the task of modern regulation. All this has made the average Delhi commuter bereft of viable options for fairly priced and efficient travel.

The Metro is somewhat an exception. So, till the time the government has lived up to its responsibility of facilitating a well developed transport system in Delhi, and making the commuter a free consumer in a well developed market with different options to choose from, how fair it is for the government to demand full market-linked usage fee for the Metro?

Driven by false conception of Metro travel benefiting only the user

The demand that a Metro user must bear the full cost of his/her usage ignores the fact that Metro usage does not only benefit the user in particular but also benefits the society at large.

From economic benefit of cheaper labour cost and more widely available labour pool due to enhanced mobility, to environmental benefit of Metro usage having a lower carbon footprint, to benefits for society like more vibrant and egalitarian civic life – greater Metro usage has a lot many externalities that get forgotten when we are restricted to the concept of pay what you use.

This is the reason why many European nations heavily subsidise Metro travel. Some cities have even been experimenting with zero fare public transport (a notable recent entrant into this club has been Tallinn, capital of Estonia) for the same reason.

Even in the US and most other sections of the world, it is the government that bears a significant portion of the burden of Metro usage as it is recognised that public welfare is served when the Metro is more economically accessible.

The DMRC is a body that runs India's most used Metro, and has been a trend-setter. It must bear in mind its role of being a role model that others try to emulate. Thus, one hopes that the proposed decision may be given a second thought in the light of the above discussed considerations.