Delhi Metros and Mumbai locals are filled with perverts. Officials must take note

Two incidents of public indecency and sexual assault in two very different parts of the country: one on the Delhi Metro, the other in Mumbai locals. What do they have in common? India’s rape culture and the apathy that surrounds it.

A Facebook post by a 22-year-old Bangalore woman from June 15 narrates a disgusting incident: a man masturbated at her on a local train. Yes. That’s a thing that actually happened. According to the woman, the official who answered her call to helpline after the incident laughed at her. It was only after her Facebook post – where she not only talks about the incident, but also how the supposed helpline person reacted – went viral that the Government Railway Police (GRP) decided to take action; against both the offender and the helpline official. 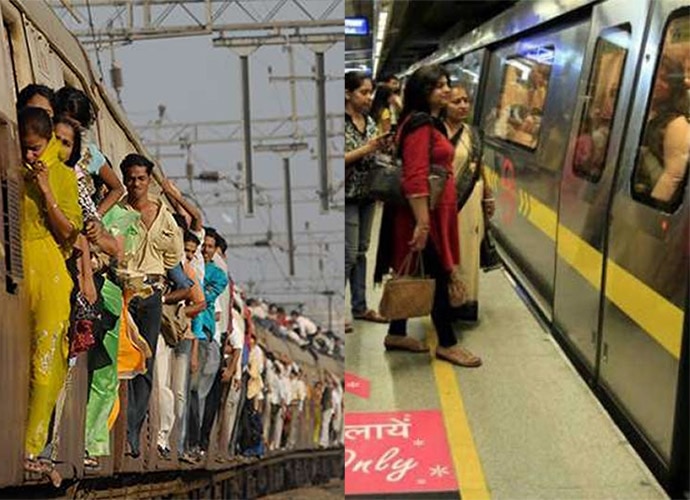 I’m sitting in the train, going back home after meeting friends who live in Borivali. I’m in the ladies compartment; there are about six other women. I’m sitting on the side that can see the handicapped section of the train, but with railings in between. On my left, there is another girl. We both are listening to music. In the handicapped section is a man. I’m looking at my phone and I see him waving at the girl through the railing. He’s put his hands through and has reached half the distance to the girl’s face. I cannot hear him, I’m wearing headphones.

I reduce the music, out of curiosity and also to see whether she needs help, I do not turn. Looking down at my phone, I hear him calling her madarch*d. I heard it at least six times in the 30 seconds I listened. I looked at him, our eyes met and I looked down again.

There are many mentally challenged people who travel on the train regularly and I’m used to many of them cursing, so I thought him to be one of them and let it go.

The split second where our eyes locked, he took the chance to come to me. He came to my side of the compartment and put his hands through just like he had done before.

I looked up, and just kept looking at him for 20 seconds. Thinking of what I should do.

And I asked the other women to tell me the police helpline and also yelled that this man was showing me his privates.

The next paragraph is a summary of that conversation:

I told the person on the line all the details. The train was just approaching Kandivli. Which compartment, what time? All of it.

Then I told him that this person had also called us what he did. And then the person on the helpline laughed. He found it funny.

I asked him whether they’d pick this person up at Kandivli.

He cut the call.

I’m not sure what happened. When Kandivli came, the man got out of the compartment and started walking towards the doors of the ladies compartment. Six women, who could easily take him down, started yelling. I stood up and walked towards the door. He told me he would rape me. I told him to do it. (I only did so because I knew he wouldn’t and because the time permitted me, so did the space.)

1) Our helplines. Do they really help? Or is equality for women just a trend for marketing and PR?

2) Rape is supposed to scare me. Stop being scared by it. Stop making it a big deal. Somewhere there, it will stop.

Rape IS a big deal. But physically, mentally for the pain it causes. Not because the honour of this society lies in my vagina. Not because I will be SCARED by the prospect because my life will be ruined.

I once even called a suicide helpline that didn’t pick up. The irony.

One has to wonder why helplines and complaint cells even exist if it takes only a viral social media post to grab the attention of the authorities. “We are verifying the complainant’s call records to find out who she called,” said Purushottam Karad, deputy commissioner of GRP to Hindustan Times. Even the railway minister Suresh Prabhu asked for an inquiry.

Have ordered enquiry in the matter.Strict action will be taken against the guilty https://t.co/8bYODQY0OK

But is that enough? Definitely not.

According to a 2015 audit of women’s safety by Akshara Centre, an NGO, women’s safefy in Mumbai locals is pretty bad. Of the 522 women commuters interviewed for the study, 30 per cent said they have been stalked at stations, while 61 per cent have felt an unwanted touch. Additionally, 51 per cent of the respondents said they have been subjected to lewd comments, while 56 per cent reported being stared at. This report, according to HT was submitted by the NGO to both, the GRP and the Railway Protection Force (RPF). But clearly they haven’t taken notice.

The second incident comes from Delhi, a city notorious for being an unsafe space for women. Again in the form of a Facebook post (that has since been removed), a user described a similar incident from Delhi Metro’s Blue line.

So, all I'll say today is: Thank you, to all the men, for making sure I never ever travel in the general coach of the Delhi Metro alone.

The time and the place of the incident is a reminder to people that cases of sexual assault occur not just in dingy roads late at night, but in crowded trains during the day as well. It has nothing to do with the time of the day or what one is wearing.

The Delhi Metro is often touted as a safe mode of public transportation, thanks to all the security it provides. But incidents like these and many more (yes, there have been several incidents of sexual assault in the Metro) prove that such is not the case at all.

What more will it take for the authorities to stand up and act?

Also read: Women are more unsafe in Modi's India (and data proves that)