Breathe, Delhi. Felling trees will only choke us faster

Merely 'greening' patches of land with saplings or larger plants serves no function.

What would you expect a government in the world’s most polluted city to do to curb pollution? Easy: devise short-term and long-term plans to tackle the crisis. Now come to Delhi, where the central government is hell-bent on cutting 16,500 trees to develop accommodation for its employees, and the court had to meddle in and ask the National Building Construction Corporation (NBCC) not to cut any trees till July 4 for the redevelopment of over half-a-dozen colonies in South Delhi.

And while the need is to have more green spaces, several such housing and construction projects continue to plague the city.

Over the last few weeks, Delhi residents had taken to the streets and the social media to protest against a proposal to fell the 16,500 trees. And while the authorities have claimed that an environmental clearance was given in November last year, it isn’t clear if a public consultation was done before granting approval to the project that so adversely affects the city’s environment. 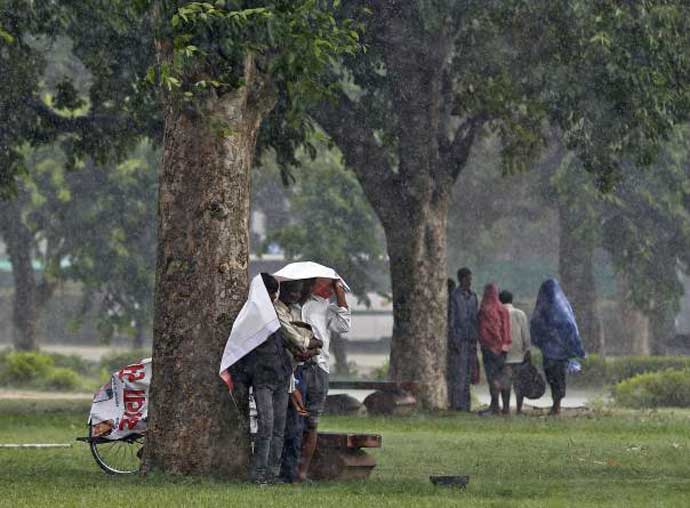 What can a tree not do for you and I? Photo: Reuters

Not just insensitive and an example of bad policymaking, the project says a lot about the democratic setup of our country, where the most influential stakeholder (the citizen) is deliberately kept out of all deliberations!

The citizens' protest against the decision made the central government come up with a clarification, and a band-aid solution of planting saplings in some far-off land (probably the Yamuna plains) to compensate for the trees felled in South Delhi, and to plant trees at the housing site.

Common sense suggests that neither solution works. “Compensatory afforestation” is a convenient “Indian idea” that has been in practice for decades.

Whenever forest land is used for a development project, a certain levy is imposed on the developing party to compensate for the loss of the vital green cover. This has only served as a “fig leaf” for covering up the uninterrupted diversion of green cover in the name of development and economics. Over the last few weeks, Delhi residents had taken to the streets and the social media to protest against a proposal to fell the 16,500 trees. Photo: PTI

Merely “greening” patches of land with saplings or larger plants serves no function. The problem in case of Delhi is three-fold:

What is more, our experiments with afforestation haven’t been worth emulating. In most cases, it was reduced to mere greenwash.

Delhi needs its trees. A host of problems over the years — deforestation, mining and encroachment — have taken a toll on the remaining green spaces in and outside Delhi. The open forests of Sanjay Van are under threat and the green shield of Delhi, the Aravallis, have been practically razed. For a city fighting a battle with pollution, desertification, a dropping water table, and weather vagaries, this act of felling trees for accommodation (which can easily be done elsewhere, and is not unavoidable) is a catastrophe. This especially comes at a time when Delhi has seen dust storms, leading to the spiking of air quality to a level which cannot even be monitored. Deteriorating air quality — earlier thought of as a seasonal effect — has now become a routine, affecting its citizens’ lives.

And in the midst of this, the government has made placatory noises of planting 10 saplings for every one tree felled. For once, at least, policymakers should start looking at trees from the lens of ecology. The loss cannot be foretold just in terms of numbers, this is nothing less than a localised ecological war.

The biodiversity of well-established trees in an area is complex, the deep-rooted root structure that enables them to survive the unseen desertification, the undergrowths, symbiotic life forms, the fauna finding shelter in the canopy, and the core environmental services like the cooling effect, shade, and oxygen-carbon dioxide balance; all of this needs a dire consideration before development is put before environment.

Even while calculating the compensatory afforestation fund, the net present value of the standing crop of trees is calculated based on its biomass, and thus completely glosses over the environmental services provided by trees.

Ten saplings may seem like a good enough compensation but decades will pass before they reach (and if they reach) the growth stage to aid the ecology as grown trees do. By then, the ecological aspects will be lost and can reforestation be so easy?

Delhi’s water table has hit such alarming levels that a report mentioned that the city would be choked dry in another two years. Reforestation shows best results in soil with good moisture content. With shallow roots in dry soil and wasted soil texture, the saplings planted here are set to die. Cutting down trees will cause irreversible damage to the city. This major misstep shows government’s lack of commitment towards solving Delhi’s infamous and killer air pollution crisis.

Delhi government under Sheila Dikshit had taken some dire measures to create green spaces in the city. The green cover of the national capital had increased substantially from 22 sqkm in 1993 to 300 sqkm in 2007 and became the only city to successfully develop 42 forests.

With every step that has been taken or not taken in Delhi in the last two-three years, we seem to be reversing the trend on attempting to make the city more liveable.

None of our cities is environmentally secure. The green cover in all our metros is far less than the recommended 33 per cent of land size. This has anyway exposed them to huge risks. The race for development has had a deleterious impact on biodiversity and the health of our cities.

From Mumbai’s plan to develop a metro coach factory at Aarey colony to Bangalore’s steel bridge plot and the burning lakes to Chennai toying with the mangroves resulting in floods to Hyderabad’s onslaught on forests outside the city premises to make space for IT industry, every green violation is just part of this script filmed elsewhere.

The last thing we need is the government toying with the idea of compensating for the loss of forests by raising plantations elsewhere, instead of addressing these critical issues.

Also read: Why dust storms have left so many fallen trees in Delhi in their wake

Post your comment
#Delhi pollution, #Delhi, #Sarojini nagar, #Nbcc
The views and opinions expressed in this article are those of the authors and do not necessarily reflect the official policy or position of DailyO.in or the India Today Group. The writers are solely responsible for any claims arising out of the contents of this article.