Delhi govt has a DIY cure for air pollution: Lock everyone inside

The Centre and the Delhi government are scrambling to find ways to tackle a predictable air pollution crisis, after the Supreme Court pulled each by its collars. The air quality in the national capital region has turned cancerous. Some say they can even taste the pollution in Delhi. If you live in NCR, you might too.

WHAT'S THE IDEA? After failing to act early, the Delhi government has proposed a jugaad to tackle air pollution. And it is – hold my cigarette – a (ok, another) lockdown.

Delhi Government tells Supreme Court that it is ready to impose complete lockdown in Delhi to control air pollution; suggested the court that it would be meaningful if lockdown is implemented across the NCR areas in neighboring states.

Now have a puff of that cigarette because the NCR air is anyway ensuring you do smoke even if you don't. 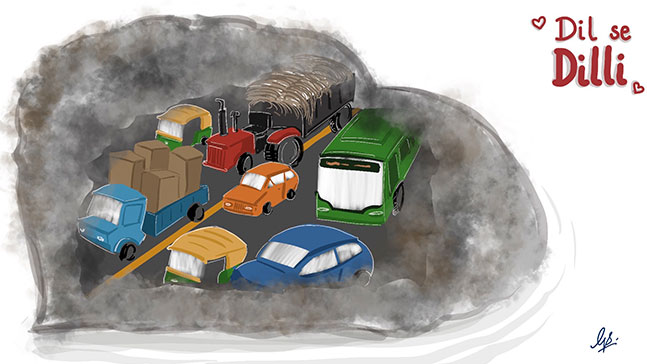 Delhi is the third most polluted city in the world as on Monday. Illustration: DailyO

The Delhi government says that if a lockdown is to be imposed, it needs to be imposed in the entire NCR region. Imposing lockdown only in the compact city of Delhi, whose air depends on the air of neighouring areas, will not be helpful.

A lockdown would put a stop to vehicular movement for a couple of days, but is that enough? You might not have heard of a ‘pollution lockdown’ till this day. And now you're wondering, is lockdown really the one-trick-serves-all solution for everything?

What’s next, a lockdown to solve the economic crisis?

THE CHATTER ONLINE: A lockdown is nothing but to essentially put lakhs of citizens in house arrest for causes out of their control. The hyperbole is not lost on netizens. Some have called it a knee-jerk reaction, superficial - just like cleaning foam on the Yamuna by spraying water.

Govt’s have learnt this new trick called “lockdown” They will use this to control every situation and hide their incompetence. What nonsense solution to solve air pollution issue. Businessmen will be ruined. Don’t do this pls https://t.co/dm7yfJdiqK

WHAT'S BEHIND THE POLLUTION? The Supreme Court recently concluded that transport, industries, and vehicular traffic are major contributors to the pollution. And Centre told the apex court on Monday that stubble burning, which is also blamed for the pollution, only contributes to about 10% of the pollution.

Severe air pollution in Delhi and adjoining areas is nothing new. It happens every winter and mostly coincides with Diwali. But this time, pollution hit Delhi earlier than Diwali, leaving governments scratching their heads on what/who to blame.

As of Monday, Delhi is the third most polluted city on this planet, after China's Chengdu and the Pakistani capital, Lahore.