DailyOh! When threats of protest made Trump cancel his UK visit, to what he ate in India today

Trump cancelled his UK visit fearing bum protests, but much earlier it caused a riot that killed over 10,000 people.

We are rather sad today coming to you because the news is not good, and the news is that at least seven people have died in Delhi and hundreds are injured in the riot between those supporting the citizenship law and those opposing it. You know, some of those wounded are said to have suffered critical injuries from gunshots, so the toll could rise. And frankly, the toll rising or falling is just about statistics. Every life counts. 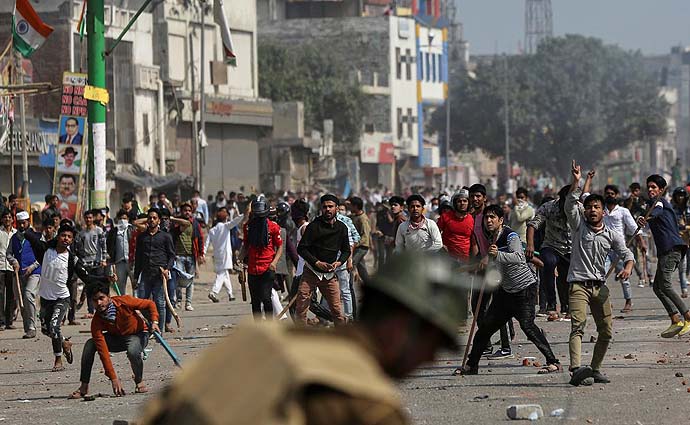 Seven people, including a Delhi Police official, have died in the Delhi riots. Scores are critically injured. (Source: Reuters)

Union Home Minister Amit Shah today held a meeting with Delhi Lieutenant-Governor Anil Baijal and Chief Minister Arvind Kejriwal. Other top officials were also present at the meeting and Kejriwal said that the outcome was positive. We hope that normalcy returns quickly, even though those killed will never be able to return home.

Death is inevitable, but dying in this manner is rather tragic. And we are not even talking about the loss of property because what is property in comparison to human life?

India is a secular country and all that, but riots in the country are routine — Calcutta riots of 1946, Bhiwandi riots of 1970, anti-Sikh riots of 1984, Bombay 1993 and the Gujarat riots of 2002 — are just some of the many we have witnessed, or our forefathers have witnessed.

Over 10,000 people are said to have died in the 1946 riots. In independent India, the worst riots, by death toll, were the anti-Sikh riots. Official figures suggest about 2,800-3,000 people died. Now, official figures are always played down figures. However, as we have already said, death toll is only about statistics. Every riot is unfortunate. The current Delhi riots more so because this is going to be global news. Why? That’s because US President Donald Trump is here and so is the global media. Yes, the global media always has a presence in India but, of course, the scrutiny is sharper when world leaders visit. So, the riots have come at a particularly bad time — bad at least for the ruling government.

Now, we are not suggesting there is a good time to have riots. Violence is bad no matter when it happens. And communal riots are particularly worse because they reflect a divided society. All societies have their divisions, just like all families or all teams — office or sports. But when the divisions are grave enough for people to kill people, then it is real bad.

Not all riots are communal. Riots can happen over food and water too. In 66 AD, a riot broke out over mooning and fart. Sorry, we know this is gross, but it happened. And over 10,000 people died in it.

Let us tell you how it all unfolded. So, it all started at the start of the Franco-Jewish war.

A Roman soldier mooned a number of Jewish pilgrims, who had gathered for Passover. Do you know what Passover is? We will tell you. Oh, wait, first we need to tell you what mooning is, in case you don’t already know. This is what mooning looks like. (Photo: Wikimedia Commons)

Mooning is the act of revealing your posterior to someone who is not expecting to see them. So, if you reveal your bum during foreplay, you aren’t mooning. You are just having a foreplay. But if you reveal them to insult someone, or just for fun, you are mooning. Who does that for fun? All kinds of people do all kinds of things. On our part, we don’t judge. We say, your life, your butt, your mooning.

Now, let’s tell you what Passover is. Put simply, it is a Jewish festival.

Coming back to the story of how mooning caused riots, the Roman soldier who was mooning, also happened to fart. The Jews, who were under Roman occupation, found this way too insulting to ignore. A riot broke out. Since lakhs of people had gathered, the riot also led to a stampede and over 10,000 people died.

But talking of mooning, we are reminded of the mooning protest that Donald Trump had to face during his visit to the UK in 2017.

Trump, who was to visit London to inaugurate the new embassy in Britain’s capital city, was forced to cancel the trip. Trump isn’t known to be a popular leader across the world, after all. This is probably the reason why Trump has been so overwhelmed by the reception he received in Ahmedabad’s Motera Stadium yesterday.

Did you get to see the menu for Donald Trump’s lunch in Delhi today? Here it is: 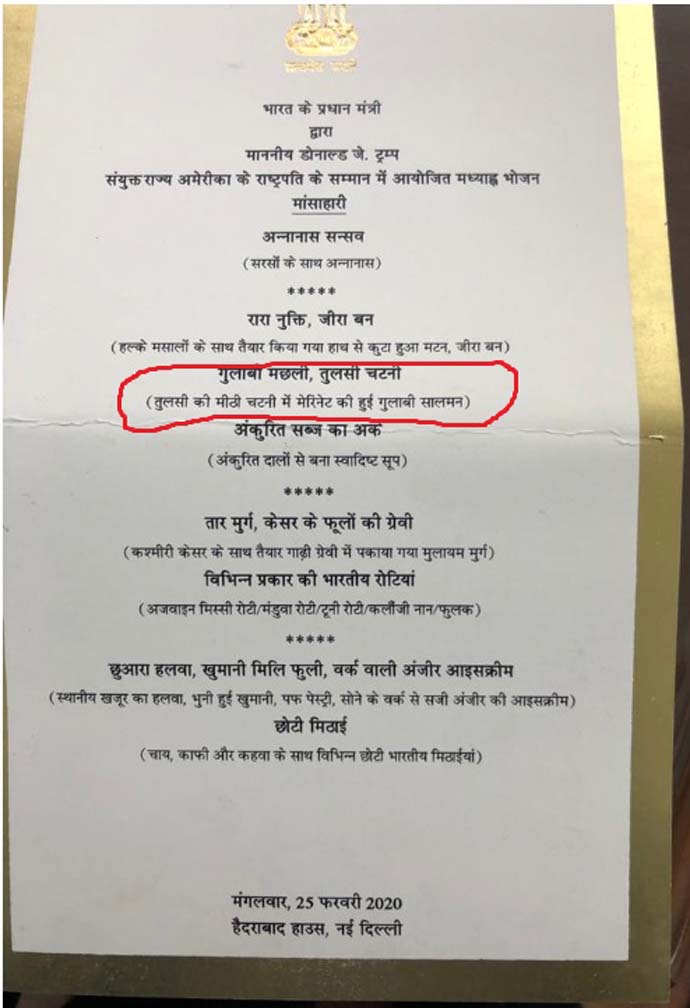 But do you know that pink salmons follow the odd-even scheme? No, not the Delhi government’s odd-even anti-pollution scheme, but one of their own kind that has to do with their population.

The pink salmon, which is the most abundant of all the Pacific salmon, also has the shortest life span of any Pacific salmon. They spend less than two years in the ocean before returning to their native streams. As a result, there are two distinct populations: those that lay eggs during odd-numbered years and those that run during even-numbered years. The two populations neither interbreed, nor intermingle. 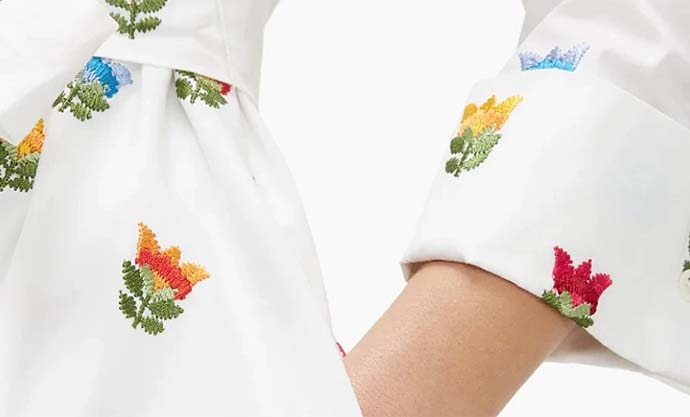 Yes, lotus is the Bharatiya Janata Party’s symbol. To be honest, we don’t know if Melania Trump really wore the dress as a nod to the BJP. But global leaders (their spouses too) are well aware that what they wear is more of a statement than what they say. Still, what they say by way of what they wear, depends on how we decipher. The lotus is also India’s national flower. The dress could have been a tribute to the national flower and not the national party. While we can’t answer that question for sure, we can tell you more about the dress. Interested? Read here.

By the way, did you listen to Trump talk to the media in Delhi today? He was rather guarded but did end up losing his cool at a CNN journalist. Now, Trump isn't known to be good to journalists, but journalists are undeterred. They keep asking him the 'tough' questions. In this series of tough questions, Trump was today asked about what he thought of Harvey Weinstein's conviction. It was when women started to come out against Weinstein that the #MeToo movement was triggered. Sixty-seven-year-old Weinstein was convicted in New York City of third-degree rape and a first-degree criminal sexual act on Monday. The court will soon announce the term he is supposed to spend behind bars for his crimes.

But when the media asked about him, Trump said, "I was never a fan of Harvey Weinstein. He wanted to defeat me. How did that turn out? I don't know much about the case. I knew him a little, but he was not a person I liked."

We do not know if Trump was a fan or not, but he did hang around with Weinstein. Look at this photo from 2009 to know what we mean. 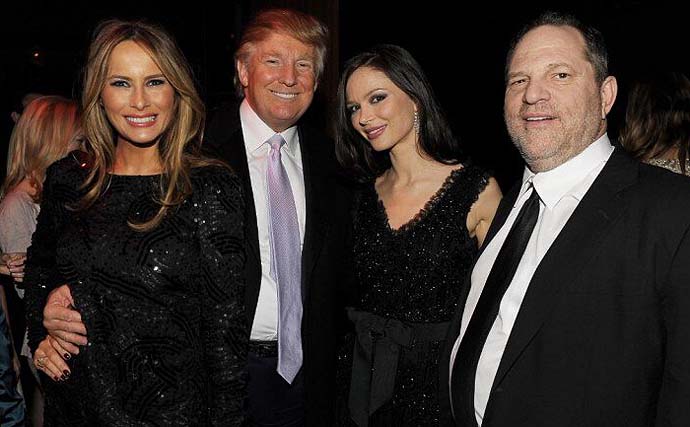 But while there is so much talk in India about the US President’s (family) visit, many back in the US are trying to figure out ‘what is India’.

US nationals have been looking up two subjects on Google - "What is India?" and "Where is India?" The search for “what is India” has risen in the US since January 28, when the White House confirmed that the visit would happen. Since February 13, however, more people have been searching “where is India”. Talking of Google searches, did you know that 15 per cent of all searches have never been searched before on Google? You know there are trillions of searches on Google through the year. Say there are 10,00,00,00,00,000 seachers in a year; 1,50,00,00,00,000 are news searches. Is your head spinning? Ours did, when we came across this fact. What a discovery Google has been! Sergey Brin and Larry Page’s coming together really revolutionised the world for us. Do you know how the two met? Just by chance. And it resulted in luck, by chance, for the rest of us.

At 22, Page was considering attending Stanford University for his PhD after getting a computer engineering degree from the University of Michigan. Brin, who was 21 then, was already a PhD candidate at the institution at that time. Brin was assigned to show Page around the campus. The year was 1995. Three years later, Google was founded.

The platform is helping us know so much. One very sad fact that we came across on Google recently was about the alarming rate of suicides among women in India. Since 2001, more than 20,000 housewives have killed themselves every year in India. We hear so much about farmer suicides, but over four times more women kill themselves each year in India.

That is mind-numbing for us. The worst part is that there is so little talked about them. If you are reading this and know of housewives around and care enough, do talk to them. You know so many lives can be saved if only those planning to give up on it knew that someone cared. That someone was around to listen.

Since we have spoken so much about riots, have you wondered what does riot actually mean? From “riots have broken out” to “she is a riot”, the essence of the word remains much the same. Riot, is indeed, our Word Of The Day.

To understand the essence, let’s get to the root of the word. Riot goes back to the Old French word riote, which means “debate, quarrel”. Interestingly, the word entered English in the early 13th century with a different meaning. In English, it meant “loose or wasteful living, debauchery”. By late 14th century, it came to mean “a noisy feast or wanton revel” but soon it came to mean “a violent disturbance of the peace”.

Peace has been disturbed in Delhi since almost mid-December 2019. We hope it returns soon. If you feel too overwhelmed with all the violence in the name of religion, listen to this. We hope this helps calm you down.