Donald Trump mocks Narendra Modi and India: The US President needs a fact-check and a lesson in history

By targeting India, Trump has belittled an important ally. He has also apparently discovered the Soviet Union was fighting the 'right' war in Afghanistan, against the USA.

India’s role in Afghanistan made global headlines on January 3, thanks to the unsavoury remarks about the Indian Prime Minister made by US President Donald Trump.

He said that though he likes Prime Minister Narendra Modi, he is “constantly telling me he built a library in Afghanistan”. US President Donald Trump has mocked the work India has been doing in Afghanistan. (Source: Reuters)

Trump further said, “You know what that is? That’s like five hours of what we spend. And we're supposed to say, ‘Oh, thank you for the library.’ I don't know who's using it (the library) in Afghanistan,” Trump said.

While diplomatic experts were shocked at such remarks by the President of the most powerful country, about an important trading partner and close ally in Afghanistan, many journalists in India and Afghanistan were wondering which 'library' President Trump was talking about.

Neither the Indian Embassy on its list of projects, nor any media immediately mentioned any library that India has built in the war-ravaged country. In its report, the leading Afghan News channel Tolo News said, “It was unclear to which project Trump was referring.”

A Prague-based Afghan journalist, currently working with Radio Liberty’s Pashto service, Radio Mashal, however, tweeted that India did help build a library in Jalalabad that has “great books about non-violence and peace building.”

Apart from all these below big projects, #India did build a library in Jalalabad and it’s amazing. It has great books about non-violence and peace building. #Afghanistan https://t.co/SzuLOQGwAV

According to local sources, India helped set up a library in Jalalabad that later became part of the Lincoln Institute's sponsored cultural centre. This could not be immediately confirmed though.

It is unlikely that the Indian PM would even be aware of this, leave aside mentioning it to President Trump “constantly”, as he suggested. It is likely though that in discussions over developments in Afghanistan, the Indian PM might have brought up the names of some of the projects that India has spearheaded there.

As the fifth largest donor to the country, India committed to over $3 billion to help rebuild Afghanistan.

New Delhi has helped build a children’s hospital in Kabul, Salma Dam in Herat, a stadium in Kandahar, the new Parliament building in Kabul, pa ower station, the 218km road from Zaranj to Delaram, connecting Afghanistan to the borders of Iran for the movement of goods from Chabahar Port, etc. Besides, it provides over 1,500 scholarships annually under different categories to Afghan students and has trained more than 3,500 Afghans in various programmes.

This was the second diplomatic faux pas over India with the US. Recently, President Trump had publicly refused to be India's guest of honour at the January 26 Republic Day parade.

If India was upset by such public embarrassment though, it did not express it immediately.

In fact, India’s reaction was quite subdued. The spokespersons of the Ministry of External Affairs did not send out any tweets, nor did the ministry issue any statements on the official PIB site. It did, however, forward a brief statement to a select group of media persons — which had no reference to the remark made by President Trump.

Most media organisations which have covered India’s reaction to Trump’s 'library' remark attributed it to ‘sources’ in the MEA. This implies that neither the Prime Minister, nor the Foreign Minister or any senior diplomat said anything on record in response to Trump’s jibe.

While listing different development projects India has undertaken, the MEA ‘sources’ did remind observers though that New Delhi is the largest donor in the region, with development assistance exceeding $3 billion.

The MEA statement added, “India firmly believes in the critical role that developmental assistance can play in transforming human lives. India does not send its armed forces abroad except under the specific mandate of UN Peacekeeping Operations.”

It further noted, “In Afghanistan, India plays a significant role as a development partner. This partnership is built on the specific needs and requirements worked out with the Government of Afghanistan. It is aimed at the welfare of the people of Afghanistan and for a tangible improvement in the lives of its people. India seeks to build capacities and capabilities of Afghan nationals and its institutions for governance and delivery of public service, develop socio-economic infrastructure, secure lives and promote livelihood.”

In most cases, one might be sure that at least the person who said something might know the exact reason behind his action. But since it is President Trump who has made himself the butt of jokes for saying many an outlandish thing, one would not be surprised if he even just cooked this up.

But by taking a jibe at India’s outreach in Afghanistan, the US President has belittled India’s contributions in the country.

Although India also provides training to Afghan security forces and has recently provided a few helicopters, it has largely refrained from indulging in direct interferences, a move that has earned goodwill among ruling Afghan elites.

Afghanistan, in fact, represents a victory of India's soft power as its efforts have been appreciated by ordinary Afghans. 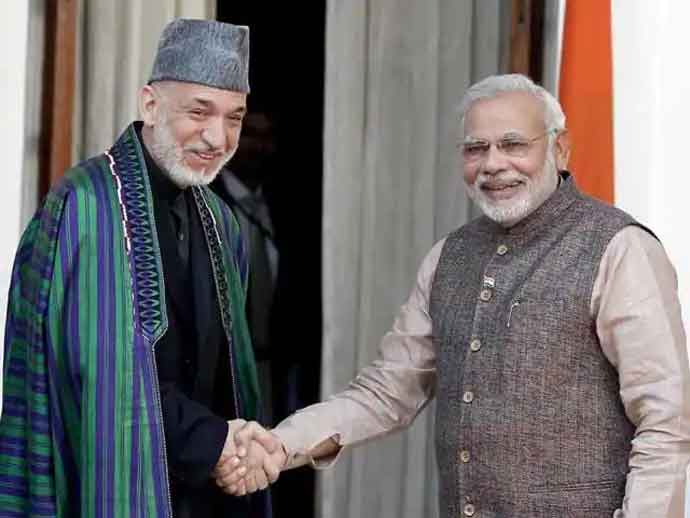 India has indeed developed a very positive image and immense goodwill among ordinary Afghans due to several welfare projects and the skill and knowledge-based training it provides. Besides, many Afghans come for medical treatment or on holiday to India — and they go back with positive memories.

Incidentally, just a day after Trump's jibe, the Afghan National Security Adviser Hamdullah Mohib arrived in New Delhi on a three-day official visit for talks on bilateral cooperation. The US special representative for reconciliation in Afghanistan, Zalmay Khalilzad, is also expected to visit the national capital next week for talks on the Afghan peace process.

Aid is not the same as combat

It is a fact that the monetary contributions of India in Afghanistan are very small — it is still the fifth largest donor — in comparison to what the US spends every year in the country. As Trump put it sarcastically, “That's like five hours of what we spend.”

But the US is not just contributing to development projects — it is also fighting the longest war in its history that has taken a toll on its economy and frustrated the establishment. Although it would not like to accept its defeat, clearly the US is not winning the battle in Afghanistan that has got the legendary tag of being “gravediggers of empires”.

On the first day of the New Year, the New York Times filed an exhaustive investigative report by Kabul-based journalist Mujib Mashal on how the CIA’s Afghan forces commit atrocities on innocent civilians in rural Afghanistan.

These, like drone attacks, that often kill innocent Afghans in “collateral damages”, have created a very negative image of Americans among the local population, in stark contrast to the sentiments they had for the Americans in the immediate aftermath of the fall of the Taliban. American troops do not enjoy the goodwill of the Afghan people. (Source: Reuters)

In the same media briefing, President Trump also ridiculed the Special Inspector General for Afghanistan Reconstruction (SIGAR) for making every report public. “We're fighting wars, and they're doing reports and releasing it to the public. Now the public means the enemy. The enemy reads those reports. They study every line of it.”

The US is now desperate for an exit from Afghanistan, and considering that at the helm is Trump, who fought the election on the pretext of withdrawing from Syria (that he has already announced) and Afghanistan, the announcement of a withdrawal can come sooner than most analysts think.

There is a fear that if the US withdraws without any peace deal, Afghan security forces that anyway control little over half of its territories may crumble — leading to civil war and migration once again.

While it was the jibe at PM Modi that grabbed the Indian media’s attention, during the interaction, the US President made several other historically inaccurate statements.

Trump said, “Russia used to be the Soviet Union. Afghanistan made it Russia because they went bankrupt fighting in Afghanistan,” adding, “The reason Russia (USSR) was in Afghanistan was because terrorists were going into Russia. They were right to be there.”

Trump: "Russia used to be the Soviet Union. Afghanistan made it Russia because they went bankrupt fighting in Afghanistan. Russia."Trump then goes on to endorse the Soviet invasion of Afghanistan. Via Fox. pic.twitter.com/oE0fuDLXyz

He was partly right in saying that the war in Afghanistan played a critical role in exhausting the Soviet exchequer and morally defeating its army. But, in one stroke, he dubbed the Afghan Mujahideen fighting against the Soviets as terrorists — conveniently ignoring the fact that it was the CIA-sponsored battle at the peak of the Cold War.

If indeed Russia (the USSR) was right, as President Trump appears to be suggesting, the US needs to apologise not just to the common Afghans but the whole world, most importantly, to its own citizens.

Osama bin Laden was, after all, a product of this global jihad that the CIA sponsored with help from Saudi’s petrodollars, while the execution was done by (and in) Pakistan.

In fact, members of the Afghan “resistance army” and “freedom fighters” battling against the Communist government in Kabul were hosted at the White House by then-US President Ronald Regan.

Before taking Russia’s name, Trump also said, “Look at other countries — Pakistan is there. They should be fighting.”

President Trump thus also thinks that Pakistan is in Afghanistan for the right cause — completely ignoring the fact that since 2002, Pakistan has been playing a double game on the other side of the Durand Line. While it supports the US war against terror, it also simultaneously continues to arm the Taliban, using them as its proxy.

In a cautioned response on Thursday, January 3, Afghan Foreign Minister Salahuddin Rabbani termed the Soviet occupation “grave violation”, and the battle against them “heroic resistance” of millions of Afghans.

Talking with the Taliban

As the peace talks with the Taliban have gained momentum once again, the only worry is that Kabul appears to be losing the plot. The Taliban appears to have opened channels of communications with every stakeholder, from Iran to China to Russia.

The Taliban is now directly negotiating with the USA in different Gulf capitals; they participated in talks in Moscow, and most recently in Tehran. Kabul has maintained its passive support to all peace initiatives — but these do not seem to be Afghan-owned. Donald Trump seems to have forgotten that the Taliban are a US creation. (Source: Reuters)

The Taliban too do not seem to be in hurry for direct negotiations with the government in Kabul. In fact, after reports of the possible US withdrawal, the Taliban may very well delay the whole peace process.

The rescheduling of the 2019 presidential elections to July 2019 has given hope for a possible breakthrough in the latest rounds of peace talks — but such outlandish statements by none other than the US President have once again left Afghans confused.

Also read: Why President Donald Trump is not the ally India wants or needs

#Cold War, #Afghanistan, #Narendra Modi, #Donald Trump
The views and opinions expressed in this article are those of the authors and do not necessarily reflect the official policy or position of DailyO.in or the India Today Group. The writers are solely responsible for any claims arising out of the contents of this article.