Will India be able to meet its all-electric cars target by 2030?

To make electric vehicles the future, the country needs to look beyond the obvious.

Back in 1909, Henry Ford had announced, "Any customer can have a car painted in any colour that he wants so long as it is black."

The announcement came with a notice that in future Ford was going to build only one model, "Model T".

Call that a command or a rebuke, separated by more than a century, albeit in different proportions, an automaker’s reprimand is coming around onto all automakers themselves globally. And India is no exception.

Road transport minister Nitin Gadkari at the auto industry’s annual conference some time ago said the automakers had no option, but to switch to more environment-friendly alternatives - notably, electric cars by 2030.

What links Ford’s and Gadkari’s declarations is the fluctuating fate of internal combustion engines (ICEs). Before the era of the Model T, fossil-fuelled vehicles had stiff competition from steam-driven and electric cars: in the 1900s, the US had as much as 80 per cent of its total cars propelled by electricity and steam. Introduction of Model T, however, effectually killed them off for the best part of a century. Times have since changed significantly. Today, as almost all developed and developing countries are pledging a time-bound phasing out of internal combustion engines, India too has jumped the electric vehicle (EV) bandwagon. 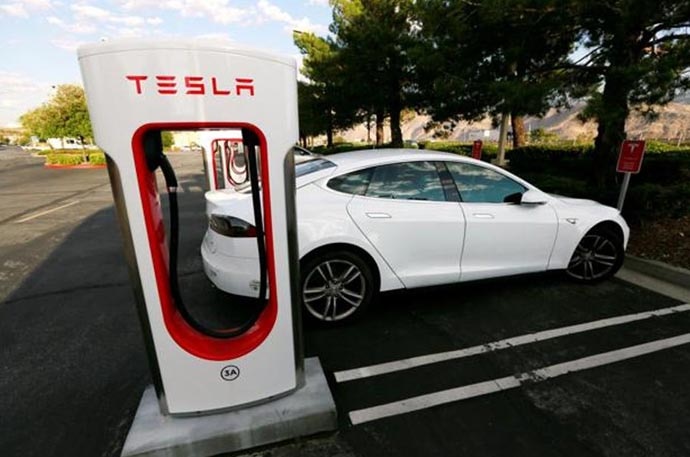 A Tesla supercharger station in California. India has only a few electric charging stations across the country. (Reuters file photo)

How is India poised to ‘let the arrow fly’?

India’s pronouncement to join its global big brothers (developed nations of the West) is an ambitious one. The government's push for electric vehicles is an evolution to what it had introduced as FAME - Faster Adoption and Manufacturing of (hybrid &) Electric vehicles in India - in 2015. India’s strategy developed by NITI Aayog is on the foundation of a three-phased approach: "Notching the arrow (2017- 2019)", "drawing the bow (2020- 2023)" and "letting the arrow fly (2024-2032)". The government has taken some actions. However, most of it is on paper, and the rubber is yet to hit the road.

While setting up manufacturing capabilities, investment in research and development (R&D), laying out a robust charging infrastructure and creating an environment of push-pull (electric vehicle supply versus customer demand generation) dynamics are all essentials to ace the game. Specific points need to be looked at while debating the feasibility of India’s meeting the ambitious-yet-steep electric vehicle target.

As green as the source of power feeding them

World’s recent surge towards EVs in the wake of climate change problems is - to say the least - opportunistic. Only when the lithium-ion battery prices made business sense, we became serious about CO2 emissions caused by transportation. That’s a situation fitting to one’s agreeing to a self-evaluation with conditions that the question paper must be favourable.

The success of EVs is not just making the car’s tailpipe vanish. One must remember, the difference between petrol and electric is just not twofold; a car's green credentials vary how it uses electricity, and how that power is generated, with necessary trade-offs for efficiency and range. In the power value chain, an EV is equivalent to an electrical load, the last point in the value chain encompassing generation-transmission-distribution-consumption. Seen holistically, the EVs will be of varying benefits if the energy mix of the grid feeding the vehicles changes - most favourable when the whole grid is fed by renewable sources of energy, the least, when the grid power comes from fossil-fuel.

Greenhouse gas emission is just one side of the story. EVs tend to become more energy efficient compared to other cars, only when the grid turns greener. It uses only 43 megajoule (mj) per 100 km when the grid is fed by renewable power vis-à-vis 112mj when the grid power is oil-ignited.

EVs as replacement of fossil fuel guzzling internal combustion engines will be of minuscule value - in fact, it would mean shifting the vast source of carbon emission from load centres (vehicles) to the power plants backwards - if they suck power from an electrical network charged by fossil-fuel-fired plants. India - predominantly powered by fossil fuel (66.2 per cent of India’s current installed capacity is thermal) - even though has pledged to produce 175 GW of renewable power by 2022 but has made little progress to that end. As per the latest data, the share of renewable energy in India's overall installed capacity is at 57.472 GW by April 2017. Consequently, with EVs, India does not have just one but two targets to chase.

Necessity is the mother of newer business models

With electrical motor drive systems to propel the wheels and batteries as the fuel substitute, EVs are transforming cars from a mechanical machine to sort of a power electronics application. This means an overhauling in the way the industry functions: dealing with newer parts, reskilling the workforce, reorganising assembly line and more.

EVs are also reshaping the mobility and transportation sector in general with ride-hailing, self-driving technology and newer models of vehicle ownership concepts such as, “mobility as a service”. EVs potentially make the industry more "lean"  meaning "to do more with less (fewer parts and personnel)". This poses immense organisational change management requirement, in the worst scenario, it could cause job loss of a sizeable chunk of the workforce.

For India to get the EV formula right, the government and the car manufacturers will need to do more than just ensuring more electric cars are made on time. To turn tides in their favour, the stakeholders involved will need to have a mastery of managing a myriad of complexities: optimising global trade (especially, importing components and inviting foreign manufacturers), setting the subsidies equation right, and reskilling its workforce - a set of tough assignments for sure.

A unique opportunity amongst myriad difficulties

India is neither blessed with lithium nor is enriched with technological know-how for EVs. This forces India’s strategy think-tank NITI Aayog to stand divided on its stance. Amid challenges galore, it is in a dilemma about the right technology - predominantly between EVs and methanol-fuelled vehicles.

India, however, has a sweet spot to leverage. It is not about a specific technology, or basis natural resource reserves (Li or such), but something far detached.Among distinguished countries, India has the lowest per-capita vehicles (see table). In a nation aspiring to grow at a double-digit rate, citizens may see it as growth-curbing or ambition-stifling.

It is time to debunk that notion.

A report by the Ricardo consultancy suggested that Electric and hybrid cars generate more carbon emissions during their production than standard vehicles and it estimated that over its whole lifecycle, the electric car would reduce emissions by 20 per cent of that of the petrol cars. Call that a glass-half-empty (just 20 per cent) or half-full (leapfrogging 20 per  cent) no cars come at zero net CO2 emission.

Much of the western civilisation has been shaped up with somewhat wasteful and less discretionary usage of automobiles, paving economic growth at the expense of the environment. It is a case of attaining bodily growth with the concurrent growth of a malignant tumour in the same body.

For India, it is one to join the big brothers, but another to learn from their mistakes. We don’t necessarily roll out kilometres of black carpet (asphalt) to invite and welcome citizens to pollute our cities, economic prosperity can be achieved through better mass mobility, greener form of conveyance and planned cities as well.

Moreover, if at all India’s target to meet EV goals looks less steep than that of developed nations such as the UK and France (which have set a no ICE car production target by 2040), it is a fact that India has fewer high polluting ICE-propelled cars to get rid of. While we are far from replacing ICE cars with EVs, India must realise that the real gain (curbing climate change or pollution) is in limiting ourselves to fewer vehicles on our roads. This a delicate game: while the policy measures should improve adoption of EVs it should not trigger proliferation of automobiles.

If we don’t take a comprehensive approach, only deploying EVs will be a blind alley.

#Nitin Gadkari, #Modi government, #India, #Electric vehicles
The views and opinions expressed in this article are those of the authors and do not necessarily reflect the official policy or position of DailyO.in or the India Today Group. The writers are solely responsible for any claims arising out of the contents of this article.

The author is a Management Consultant and writer.