The Buddha advocated the middle path. Sufi saints advocated love. Ashoka advocated compassion. Today, this is no longer history for India. These are lessons we need to live.

My research on monuments leads me to interesting places and as someone who feels that stones speak, I hear some incredible stories from ancient and medieval monuments. Recently, on a trip to Junagadh in Gujarat, I came upon an Ashokan rock edict.

This edict has 14 important inscriptions — but nothing more important than the 13th:

“On each occasion, one should honour another man’s sect, for by doing so, one increases the influence of one’s own sect and benefits that of the other man; while by doing otherwise, one diminishes the influence of one’s own sect and harms the other man’s. Again, whosoever honours his own sect or disparages that of another man, wholly out of devotion to his own, with a view to showing it in a favourable light, harms his own sect even more seriously. Therefore, concord is to be commanded, so that men may hear one another’s principles and obey them.” 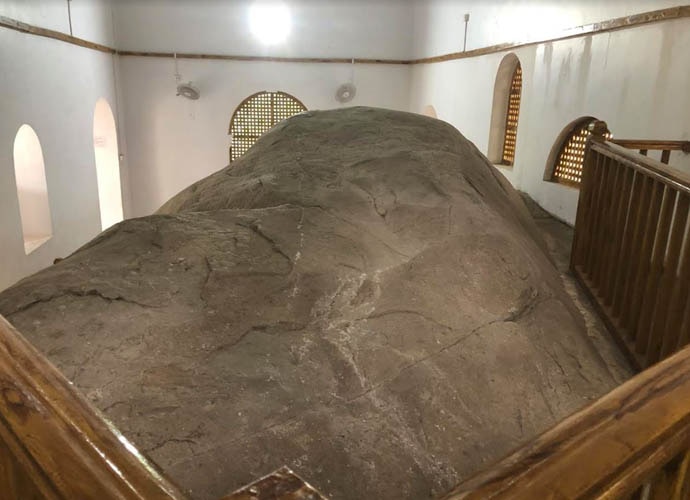 The importance of honouring the other: Vital lessons on the Ashokan rock edict, Junagadh, Gujarat. (Photo: Author)

This resonated with me for this is the creed that I grew up with or, dare I say, I was born with, as it was my parents’ and grandparents’ belief too.

Ashoka (304 to 232 BCE), the great and wise emperor, had seen and committed violence — and shunned it all after the battle of Kalinga in disgust. He embraced Buddhism and adopted a path of peace and ahinsa. He also preached it to the world. With that view in mind, he had his edicts written on rocks and pillars and erected on major roads and trade routes. These were decoded by James Princep in 1837.

Ashokan edicts are an education on model practices of governance, with emphasis on dharma (duty/religion), avoidance of practices which lead to cruelty, sin, harshness, pride and anger among his subjects; protection of his people, concern for the environment, etc., and, of course, tolerance amongst sects.

These are principles which are just as relevant today as before.

In fact, more today as we see growing violence in the world.

So, what were the teachings of Lord Buddha that influenced Ashoka to such an extent? The middle path: It is perhaps, as Ashokan edicts testify, the hardest to find. But well worth the effort. (Photo: Author)

A young man named Siddhartha Gautam, born sometime in the 5th or 6th BCE in a royal family of Shakya, living in the lap of luxury, decided to renounce it all in search of the truth.

My search led me to the Mahakala Caves, near Gaya in Bihar, where Gautam, who later became Lord Buddha, did severe penance and self-mortification for six years in search of the truth.

He almost died but could find no answer.

When he realised that austerities could not lead to realisation, he abandoned them.

His five ascetic companions, disgusted at his seeming failure, deserted him and left for Sarnath.

This cave is very important for it is the place where after doing severe penance and almost starving to death, Gautam realised the futility of extreme asceticism and that the key to enlightenment was a ‘middle path’ between self-denial and self-indulgence.

It depends on whether we are looking for commonalities to bridge the gap and differences or to deepen the chasm.

There were many different types of asceticism practised by the Chisti saints, including habs-e-dam (holding back one's breath) and chillah-e-makus or 40 days continuous vigil.

It’s the latter that Baba Farid did in this chillahgah. Habs-e-dam and meditation or dhyana were once again inspired by the teachings of Buddhism.

According to Professor Tara Chand in Influence of Islam in Indian Culture, “What wonder then that the conception of Nirvana, the discipline of the eightfold path, the practice of Yoga and the acquaintance of miraculous powers were appropriated in Islam under the names of Fana, Tariqa or Saluk, Marawabah and Karamat or Mujiza."

Sufism came to India in the medieval age and flourished here. It found a home and many disciples.

Baba Farid was brought out in an emaciated state by his spiritual master Qutub Saheb and given nourishment.

In fact, the legend of Buddha entered Muslim literature as the type of the saintly man — and Muslim hagiologists assimilated the stories of Ibn Adham to the Buddhist legend. Several asceticisms: From habs-e-dam to chillah-e-makus, Chisti saints braved a great deal in search of the truth. (Photo: Wikimedia Commons)

One of the earliest Sufis, Ibrahim bin Adham (730-778 CE), born in an Arab community settlement in Balkh, is very similar to Lord Buddha. Like Buddha, Abu Ishaq Ibrahim bin Adham was born into a royal family of Balkh in Afghanistan. He too renounced his royal life in favour of mysticism after some life-altering experiences, which showed him the transience of life.

To come back to Gautam, he left the cave and came down the Doongeshwari hills to the village of Senani.

There, as he lay weak under a peepal tree, a lady named Sujata from that village saw him. She fed him a bowl of kheer (rice porridge), reviving him.

After the nourishing kheer, Lord Buddha made his way to the town and finding a beautiful peepal tree, sat down under it.

It was under this peepal tree — famous now as the Bodhi tree — that he sat. As he mused in deep meditation under the tree, he was attacked by Mara, the Lord of Illusion, who wanted to distract him and break his concentration. This is depicted in many paintings in the various monasteries in Bodh Gaya. Gautam touched the earth, calling it as a witness. The earth shook in confirmation. Mara unleashed demons on him — but Gautam's wisdom prevailed over the illusions and the power of his compassion transformed the demons' weapons into flowers and Mara and all his forces fled in disarray.

It is here that Gautam found enlightenment and became The Buddha or the Enlightened One.

From that day onwards, millions of pilgrims, tourists and scholars have come and sat under the tree to imbibe the lessons taught by Lord Buddha. The tree of wisdom: Millions of pilgrims, tourists and scholars have sat here to imbibe the lessons of Lord Buddha. (Photo: YouTube/ Brother Karaviro)

I too sat there in deep contemplation, wondering why we hate, fight or live in strife when the path of all religions is to teach humanity and becoming a better person? Why religion, which is supposed to make us a better person, is used as a tool to divide?

After spending seven weeks here, Lord Buddha went to Sarnath, where he found his former disciples and gave a sermon in the deer park, formulating his four noble truths and the eightfold path.

The four noble truths are:

His first sermon is known as the Dhamma-Chakka Pavattana Sutta (setting in motion the wheel of universal truth).

Buddhism is now the fourth largest religion in the world.

At its core is discipline, meditation and wisdom.

It has inspired many.

According to Professor Tara Chand, “Buddhism emphasised the democratic side of religion, the spiritual enfranchisement of Sudras and women, and the preaching of religion through the medium of the popular languages, that is, the vernaculars.”

In front of the exit gate of the Mahabodhi temple, there is a sign — which says Jama Masjid.

I followed it and came upon the site of an old mosque. It has now been thoroughly renovated and nothing remains from the past but the Imam there told me that the original mosque was built in the 19th century for the Muslim workers who were working on the restoration of the Mahabodhi temple.

The temple spire can be seen from the mosque as it is just behind its western wall.

To me, that was a magical moment. Side by side: Right outside the Mahabodhi temple, there is the Jama Masjid, a mosque constructed for Muslim workers restoring the temple. (Photo: Author)

Today, as we see so much of negativity — it is time to recall the message of Lord Buddha and rethink the paths we tread. Greed and an ever-growing desire for instant gratification lead to frustration, increasing our suffering and causing us to make others suffer from our hostility. Does hatred for the perceived wrongs of the past make us happier persons?

I don’t think so.

Can spreading disharmony, abuse or falsehoods end our sufferings? I don’t think so.

While I don’t have an answer to the secret of a happy life, I do know that the middle path as prescribed by Lord Buddha can make us a whole lot happier.

It is time to remember the four noble truths for, at the centre of our tricolour, is the dharma chakra of Ashoka, which symbolises it.

On this Independence Day, let’s pledge, once again, to fulfil our duty and ensure that all our fellow citizens have equal access to justice, liberty and equality.

And, above all, to promote among them all: Fraternity assuring the dignity of the individual and the unity and integrity of the Nation.

Also Read: What Rama and Sita can teach you about everyday life