DailyOh! Singapore's Changi is the world’s best airport, but which was the first?

Singapore's Changi Airport has been ranked the best airport in the world for the eighth year in a row. But do you know which was the world's first airport?

The pandemic could well be on its way to becoming an endemic. Says who? Say WHO. To be precise, says WHO emergencies expert Mike Ryan. Ryan has warned we should probably stop asking when the virus will go away because it may never go away just like HIV. Ryan also added, “This disease may settle into a long problem, or it may not be.” Don’t blame Ryan for not being sure because nobody is. He is only preparing us for the worst case scenario. And the worst case scenario is that the pandemic will never go away - it will then be called an endemic.

So, what is an endemic? It derives from the Greek endēmos, which joins en, meaning 'in', and dēmos, meaning 'population'. The Merriam-Webster dictionary defines endemic as something belonging or native to a particular people or country. In the context of diseases, our Word Of The Day endemic means a disease regularly found among particular people or in a certain area. Sporadic cases of HIV are still found in various areas across the world. There is no vaccine for the AIDS-causing virus yet. Ryan’s fear, which is our shared fear, is that a vaccine may not be found for coronavirus too. But it’s just a fear. It may or may not turn true.

The emergencies expert has called on the world to make “massive efforts” to counter the disease. On the individual level, the effort includes wearing the mask and washing hands. Keep the sanitiser handy too.

Dr. Mike Ryan, the head of the World Health Organization emergencies program, said that the novel coronavirus may become ‘another endemic virus in our communities’ and ‘may never go away’ https://t.co/vnfbFP3LDr pic.twitter.com/vUDJaGMHDn

The world is no longer going to be the same place. Not any time soon. But you can watch Gulabo Sitabo soon. How soon? June 12. That’s when the movie, starring Ayushmann Khurrana and Amitabh Bachchan, is scheduled to release on Amazon Prime Video. It is being called the biggest movie acquisition for Amazon Prime till date. Can the biggest get bigger? Your English teacher would have told you no. But you know it can. More movies may release on OTT platforms since cinema halls are unlikely to open any time soon. The beginning has been made by Gulabo Sitabo. But do you know who Gulabo and Sitabo actually are?

The two are characters from the traditional glove puppet theatre in Uttar Pradesh. These puppets were created by a family in Pratapgarh, the village in UP which happens to be Amitabh Bachchan's ancestral village.

The story of these puppets is basically a love triangle where Sitabo is the worn out and overworked wife, and Gulabo, the scintillating mistress of the same man. Who are Gulabo and Sitabo in the movie is not known as of now. What is known is that the movie is a satire set in Lucknow. For the rest, keep the popcorn ready for June 12.

No traffic jams, no rush to book tickets and no snacks burning holes into your pockets. Who would want to go to movie halls even after corona? That question can have many answers but the one answer we have for sure is that nobody would want to head home from the Delhi airport if the current UP transport corporation charges applied. Probably, based on an assumption that all people who travel in flights are loaded so what’s the harm offloading them, the corporation came up with a plan to charge Rs 10,000 for taxi rides from Delhi airport to Noida and Ghaziabad.

What about other modes? Well, there are buses too. According to the actual plan, one needed to pay a minimum of Rs 1,000 per seat in a non-air-conditioned bus, and Rs 1,320 per seat in an air-conditioned bus for a distance of up to 100 km. Faced with criticism over the move, the corporation formed a three-member committee to review the order. We want to first know who was the one person who approved such an order. Was the government planning on punishing people for making it to the airport amid the pandemic? We can neither confirm nor deny that.

It is to clarify that UPSRTC services from IGI airport to Noida/Ghaziabad quarantine centres are completely free of cost, just like all other UPSRTC operations where we are ferrying migrant workers from railway stations to their respective home districts. pic.twitter.com/sU4bccSnZm

What we can confirm though is that Singapore's Changi Airport has been declared the world’s best airport – not once, not twice, but for the eighth time in a row. If you have been there, seen that, we say – lucky you. If you haven’t, you need to know (and for now, just be satisfied with that knowledge) that the airport has gardens and pools. Not just a garden – an orchid and a butterfly garden. Not just any pool – a rooftop pool. The airport is a travel destination in itself – just that it is supposed to be a transit point in your journey. 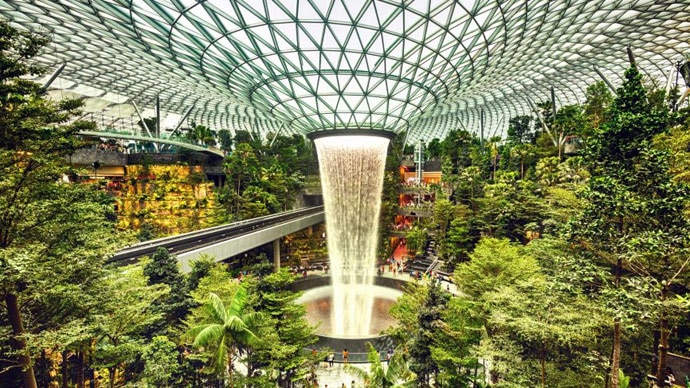 Changi Airport is a travel destination in itself. (Photo: Reuters)

Talking of airports and airports with rooftop pools, we thought of how it all started. And it all started with Britain's Hounslow Heath Aerodrome, the first airport to operate scheduled international commercial aviation services in August 1919. Flights took off and landed even before that from various regions, but didn’t qualify to be called airports because to be classified as an airport, the facility must contain an aerodrome for taking off and landing, store and maintain aircraft, and a control tower.

The world’s first airport, however, closed its runways and was replaced shortly after opening by the Croydon Airport in March 1920.

What a ‘remarkable’ journey mankind has made – from walking to cover distances, to flying to reach places, to walking again. We flew distances, but today we can’t even step out. That, perhaps, is what coming full circle looks and feels like.

What’s worse? The treatment being meted out to those who contracted the disease. No, not the medical treatment, but the societal one.

In Bihar’s Darbhanga, a woman was not allowed to enter her society after she made a full recovery from the disease because some people are reeling under idiocy, for which a cure is still to be found. We do not know if someone is actually looking for it. But these Covidiots Of The Day forced the woman to return in the same ambulance which came to drop her home.

Your doctor may certify you have recovered, but that is between the doctor and the patient. It is not an idiot’s concern. And we are talking about a whole bunch of idiots - the more, the crazier. The hope now is that authorities would intervene and facilitate the woman’s return to her own house.

Let’s move away from the idiots for now because we have some birthday wishes to extend. First, let’s wish Mark Elliot Zuckerberg because his Facebook helps us remember birthdays of friends whose birthdays we would never have remembered otherwise. So, happy birthday, Zuckerberg.

Zuckerberg shares his birthday with Indian filmmaker Mrinal Sen. Sen is remembered for many of his works, but he is remembered most for a work that authorities wanted to be forgotten - Neel Akasher Neechey (1959) - the first movie to be banned in independent India. The plot revolved around the bond between a housewife and a street vendor, but had deep political undertones. It brought out the dark truth that the rich and powerful do not care about the poor and powerless. Our apathy towards the poor is out in the open today. Watch it to believe it.

The video is from Bihar. In Maharashtra, from where many migrants have been walking back home, Chief Minister Uddhav Thackeray has been elected unopposed to the state Legislative Council. He can now stay in the chair till NCP and Congress continue to support Shiv Sena. Uddhav, the first from Thackeray family to become a Chief Minister, was sworn in on November 28, 2019. He had to get elected before May 28 to not lose chief-ministership.

We will leave on that note for now.

Also read: DailyOh! India isn't aatmanirbhar, Indians are. What Nirmala Sitharaman is doing to get India there

Post your comment
#Mrinal sen, #Changi airport, #Coronavirus pandemic, #Endemic
The views and opinions expressed in this article are those of the authors and do not necessarily reflect the official policy or position of DailyO.in or the India Today Group. The writers are solely responsible for any claims arising out of the contents of this article.