Farm Bills: What corporatisation did to agrarian societies of the world

Unchecked corporate power and increasing political influence have left farmers to operate under the push ‘get big or get out’ and often driven abuse of farmers’ rights.

Amid widespread protests and turmoil, Rajya Sabha gave its nod to the three contentious agriculture Bills that seek to replace ordinances enforced in June this year. The idea behind the three Bills is to expedite investment of infrastructure and technology in the agrarian sector and liberalise farm market by facilitating the involvement of corporates. However, the farming societies, especially in Punjab and Haryana and those at the opposing end of the spectrum, reiterate that the government attempted to supersede the minimum support price (MSP) mechanism and Agricultural Produce Market Committee (APMC) that provided farmers with a fair share in collective bargaining on price and non-price issues (weighing, grading, measurement among others). The protesters also called for regulation of APMCs to resolve evils of cartelisation within mandis.

The corporatisation of agriculture includes corporate structures controlling input cost factors such as seeds, irrigation, fertilisers, electricity cost. Since the Green Revolution of the 1960s, the United States has greatly influenced Indian Agriculture Policy more covertly by coercing tariffs and imports at the World Trade Organisation. Furthermore, the corporatisation includes allowing corporates to control the means of production and chains of distribution. By 2013, three American corporate companies namely Cargill, Archer Daniels Midland Company (ADM) and Bunge controlled more than 50 per cent of the agrarian market of the world through vertical integration and contract farming. 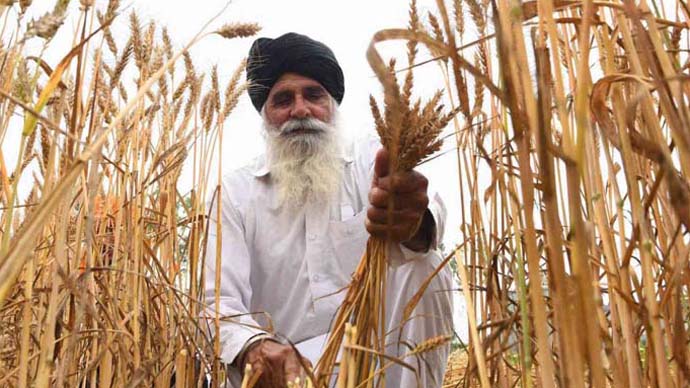 Small farmers are evicted out of the agrarian market by the pricing policy of corporations. (Photo: Reuters)

“Farmers are pressurised by corporations; they are paid low prices for their products such as soya, wheat and maize, and they pay high prices for seeds, pesticides, energy, fertilisers and animal feed. The record food prices of 2008 resulted in higher profits for corporations, and not for farmers who have to bear all the risks. Corporate lobbyists often also work in government institutions. They often successfully lobby for corporate interests on food standards, approval of pesticides, GM seeds, trade agreements, or the public research agenda,” says Andy Goldring of Permaculture Association and advocate for ecological sustainability in his paper.

Globally, the largest purchasers of agricultural produce have been responsible for hunger and starvation among the peasant community and small farmers. Small farmers are evicted out of the agrarian market by the pricing policy of corporations. Many Brazilian farmers are indebted to the American corporate giant Bunge; which now has a claim on their harvest and land. As liberalisation creates avenues of free and global market available to farmers, rising agricultural prices soar the interest of investors and normalises land grabbing within the agrarian economy. Land grabbing has particularly affected Africa and South America where small-scale farming families are brutally evicted from their lands and the area is sold or leased to foreign (private) investors. The land is taken over for agrofuel plantations just as palm oil plantations displace small scale farmers in Indonesia.

The commercialisation of agriculture in colonial India reflected ruthless exploitation by East India Company and resulted in oppressive zamindari system, arbitrary expulsion and unpaid labour whenever the peasant community rose in revolt. It also witnessed the displacement of farming societies of Jharkhand and Chhattisgarh to labour for tea plantations of East. The sink in production of enrichment cultivation (with a variety of seeds) to monoculture plantation of commercially valuable crops has continued even in post-independent India. In the Philippines, over 3,000 rice varieties were grown before the 1960s and reduced to two rice varieties over 98 per cent of the cultivated area by the 1980s. Similarly, global seed firms like Nuziveedu, Monsanto (now taken over by Bayer), BASF, DuPont Pioneer made inroads to India and ramped up the seed replacement rate for genetically-modified maize and cotton. Simultaneously, higher yield through high replacement rate has helped farmers increase their income in some parts of the country. Concentration to a handful of suppliers has led to the development of only a few varieties of seeds.

Unchecked corporate power and increasing political influence have left farmers to operate under the push ‘get big or get out’ and often driven abuse of farmers’ rights. In 2010, price fluctuations caused by China’s enormous soya and maize purchases and droughts in Argentina and Russia massively profited trade giants. In the second half of 2010, the value of Bunge (world’s largest soya producer; the only soya producer in many countries of the world) shares increased by 30 per cent. Further, agro-fuel targets capitalised upon it to expand trading opportunities specifically in the EU and US.

Belgian scholar and UN Special Rapporteur on the Right to Food, Olivier de Schutter (2008-2014), criticised the pricing pressure and said low producer prices led to deteriorating social conditions. He called upon states to prevent unfair practices of trade with the removal of imbalances caused by market forces. Agricultural policy analyst Devinder Sharma in a recent interview pointed out how the corporatisation of American agrarian society since the 1960s led to decline in farmers’ incomes over the years. He also remarked that the government’s focus should be to improvise the APMCs specifying the prevailing defects within the mandi system. Something that was also retained in the 2006 Swaminathan report by the National Commission on Farmers that suggested a law should be made for MSP to be at least 50 per cent more than the weighted average cost of production.

#Farmers, #Minimum support price, #Agriculture, #Farmbills
The views and opinions expressed in this article are those of the authors and do not necessarily reflect the official policy or position of DailyO.in or the India Today Group. The writers are solely responsible for any claims arising out of the contents of this article.