Air safety rules clearly state that verbal intimidation in a flight is a punishable offence.

A 28-year-old student was arrested by the Tamil Nadu police for shouting "fascist BJP government down, down" on board a flight. Lois Sophia's slogans were reportedly directed at Tamil Nadu BJP president Tamilisai Soundararajan.

While there has been widespread instant condemnation of Sophia's arrest, saying the move smacks of 'fascism', what needs to be underlined is that raising slogans on board a flight is pure anarchy. Neither action should have any place in a vibrant democratic set up.

#WATCH BJP Tamil Nadu President Tamilisai Soundararajan got into an argument with a co-passenger at Tuticorin airport. The passenger who has now been detained had allegedly raised 'Fascist BJP Govt down down' slogan #TamilNadu pic.twitter.com/TzfyQn3IOo

Sophia, on her way home from Canada, was with her parents who joined her at Chennai for the IndiGo flight to Tuticorin.

Here's what she tweeted while still on board:

The two women got into a heated argument soon after the flight landed at Tuticorin. While the police tried to pacify the two women, both appeared unwilling to relent.

The TN BJP chief alleged that Sophia raised her fist while raising the slogan, a claim that can be easily corroborated with the help of CCTV cameras.

A senior police officer said Sophia was taken into custody after Tamilisai filed a complaint with the airport police.

Sophia has been charged under IPC Sections 505 (statements conducing to public mischief), 290 (public nuisance) and Section 75 of the Tamil Nadu City Police Act. 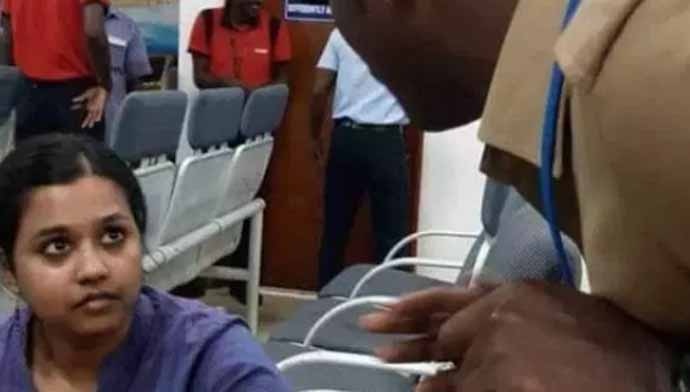 Lois Sophia was sent to judicial custody for 15 days after she shouted “Fascist BJP government down, down”. (Source: Twitter)

Raising slogans in a flight can lead to endangering the lives of fellow passengers and if this is not condemned, we could soon find this becoming a norm. Flights and airports are places where people generally get unhindered access to political leaders and celebrities. An encouragement to sloganeering and shouting in flights is an open invitation to trouble.

There is no denying that every citizen has a right to express dissent and protest against a government or political leader — but this kind of a protest on board a flight is pure anarchy.

We have countless examples before us to show how protests have turned violent in the past. What if Sophia's sloganeering had gained momentum in the flight and led to some untoward incident?

A co-passenger Louis Sophia in a flight with BJP TN president Tamilisai shouted "Fascist BJP government down Down" at Tuticorin airport while collecting baggage. Tamilisai entered in verbal tiff with the her and pax was detained by police. pic.twitter.com/6NUsl7lk4v

Even the Constitution places reasonable restrictions on all forms of freedoms that it grants us. Freedom comes with responsibilities, much as one would like, there is no pick and choose here.

Air safety rules clearly state that even verbal intimidation in a flight is a punishable offence.

Taking the act to another level, however, Soundararajan told The Indian Express: "The young and seemingly innocent girl raised the slogan against the BJP government... I was on Seat No. 3 and she was on Seat No. 8. When I was coming out after the flight landed, she saw me and suddenly shouted 'down with fascist BJP government'. When I turned to her, she repeated it. Seeing a very young girl sitting with her parents, I thought I will ignore it. But she repeated it, again and again, when I was coming out of the aircraft. She was also passing some comments at me."

Drawing a strange parallel, Soundararajan said a person using the word 'fascist' cannot be an 'innocent' person. While Soundararajan's grievance is genuine, her comparison is not. When political leaders speak, they shoulder an added task of being responsible in their utterances. According to Tamilisai Soundararajan, a person who uses the word 'fascist' can't be 'innocent'. (Source: ANI)

We indeed live in troubled times because we have completely thrown moderation to the air in defending our political positions.

Also read: Acid attack on Congress workers during victory rally in Karnataka: A curtain raiser for 2019?

#Tamilisai soundararajan, #BJP, #Tuticorin, #Lois sophia
The views and opinions expressed in this article are those of the authors and do not necessarily reflect the official policy or position of DailyO.in or the India Today Group. The writers are solely responsible for any claims arising out of the contents of this article.