It’s World Yoga Day, and in the past three years of his Delhi sojourn, Prime Minister Narendra Modi has marked the occasion by performing yoga in the national capital, and Chandigarh and Lucknow. This year, the PM has decided to stretch and twist his muscles, and prove to the people (especially the voting people) of India that he is as fit as a fiddle and can walk on grass, through puddles, and lie inert on rocks, in Dehradun.

Even though he is 67. And even though BJP president Amit Shah had once let it slip that “politicians should retire at 60”, and then hastily bumbled his way through that one, when he realised that the prime minister was well past this retirement age.

But we are not worried, no sir. After all, our dear leader has wrestled with crocodiles in his childhood and continues to wrestle with the opposition and allies alike. What’s more, with his 56-inch chest, he favours using “muscle”. Didn’t he just recently decide to have a “muscular” policy in Kashmir, even if this muscular policy comes at the cost of an ally (now former), the state, and its citizens?

I digress. Back to yoga.

As I was saying, Modi has decided to go beyond Delhi to do the annual yoga jamboree.

I don’t blame him. I am not much into yoga (so anti-national), but I do know that most of the asanas revolve around breathing; indeed, pranayama (the regulation of breathing, representing life force) is the very basis of yoga. 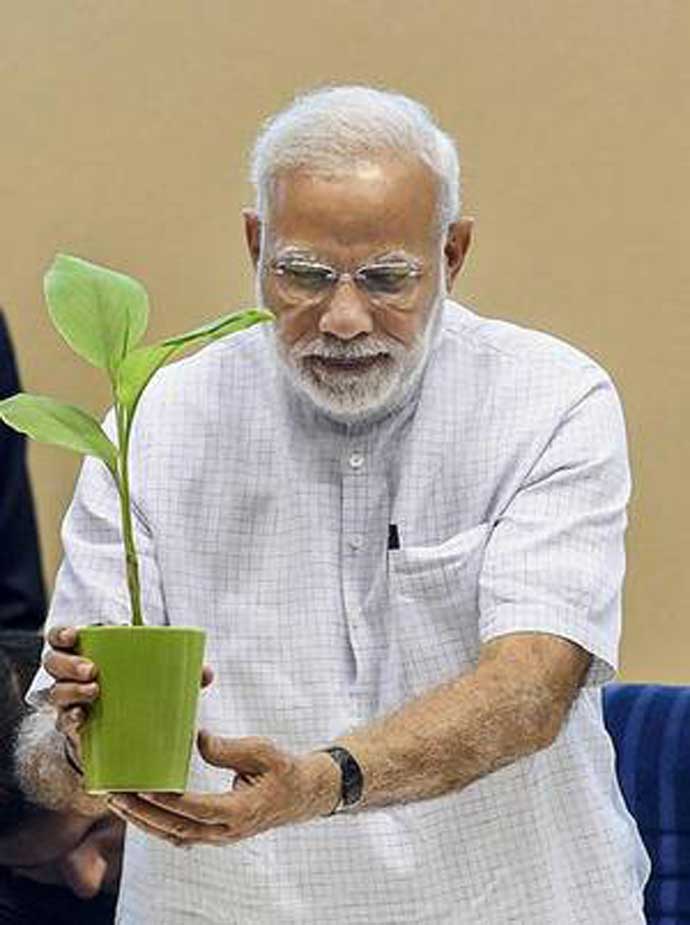 Wasn’t it Modiji who once said 'respect for nature is part of our culture'? Photo: PTI

Actually, I gave up yoga when I realised that with every deep breath I took for my well-being, I was swallowing PM 2.5 plus other toxic gases, and impairing my lungs and shortening my life span (further) in the process.

So, of course it is nothing short of sacrilege to expect the honourable PM to do his kapalbhaatis in this gas chamber and shorten his valuable life.

Our PM is a wise man. He realised that he presides over not only the political capital of India, but also the global capital of pollution. One would have thought that being all powerful, the PM would have taken this cue and worked overtime (you know he works almost all hours God gave him, right?) to make Delhi’s — and the rest of the country’s — air clean. Conserve the woods, the trees, the wetlands; tighten pollution norms for construction and other polluting industries et al, so we could all diligently practise this ancient Bhartiya science of yoga, and collectively take a pranayama of relief. But no, our prime minister is an honourable man and does not let his fondness for yoga interfere with his vision for “development”. So the trees continue to be cut, the coal plants continued to spew toxins, and the air gets deadlier — Modi realised that even his 140 air purifiers could not work miracles. So he shifted the location to celebrate World Yoga Day, and chose the nicest, cleanest and greenest part of Dehradun — the forested grounds of one of the finest heritage buildings in the country, the Forest Research Institute (FRI), to do his yoga.

For the First Lungs of India, only the very best air will do.

Before I proceed, a word on FRI, the country’s premier institute in the field of forest research and education. Its vast campus with the backdrop of the outer Himalayas sprawls over 450 hectares and hosts incredible biodiversity. It has a reserve forest within its campus, which is part of, and contiguous to, the Mussoorie Forest Division — and bordered by the Indian Military Academy. 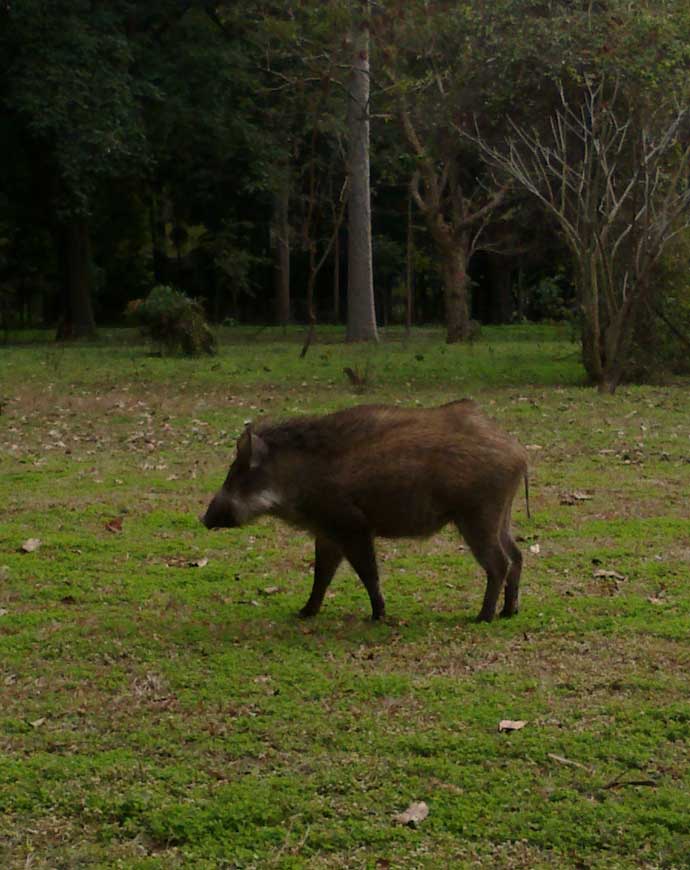 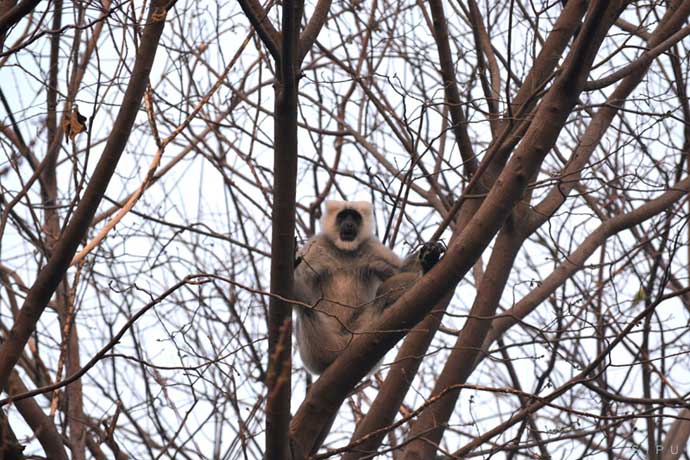 These, together with Wildlife Institute of India and a few fast disappearing pockets of green, form the lungs of a rapidly developing, concretised Dehradun.

But, with a VVIP visiting, all those things that kept the FRI green and its air crisp and clean, did not seem so benign. Each took on a sinister connotation, and it was ordained that the natural environs of this heritage institute must be “managed” for security and other such reasons.

So, Uttarakhand’s bureaucracy — chief secretary downwards — got into a huddle to strategise a plan to make FRI a safe, secure, sterile venue for the prime minister.

“Sweep the shrubs,” one opined, “who knows what form of animals lurk underneath?”

“Chop those long branches,” another advised, “they hurt the symmetry.” “Off with their heads,” shouted another wise man, pointing to tall trees — it is difficult to monitor stuff towering above (think UFOs). “Out with the monkeys,” thundered another, “and heaven’s above, free the venue of snakes.”

Armed with these orders, the forest staff hurried and scurried; peering in every nook and corner and cranny for snakes, they hunted for (but never found) monkeys, they cleared the dead wood. But as any forestry student worthy of the FRI would tell you, there is nothing like “dead” wood, which teems with life. In this case, students had recorded nesting owls and owlets in the wood that was declared dead and disposed off.

But then, come on, what are owls when compared to a PM’s safety?

Shrubs and grasses were cleared; even though such an understorey hosts a variety of mammals — as the FRI details on its website: mongoose, civets, black-naped hare, squirrels, ground-nesting birds. Green lilies were mowed over, trees pruned, branches lopped to make space for parking and for a clear, unobstructed view.

This was done mainly only in that part of the campus where the PM will lead the yoga function. But it also includes the Botanical Garden, where you are not allowed to prune or cut; and in the Reserve Forest area, where any activity is governed by the Indian Forests Act, 1927 and the Forest Conservation Act, 1980.

Hindustan Times reported Dehradun’s Divisional Forest Officer as saying that “two snakes were caught and released”, and more teams have been deployed to ensure that no snake or monkey or any such creature dares to show its face until the yoga celebrations are duly over.

But why hunt snakes out and catch them to release them elsewhere? Surely, the forest department and other officials are aware that an animal is not to be actively caught and translocated, unless it is a threat to life or property. It stresses an animal out, endangers it further.

Every being, including snakes, has its home territory and when “rescued” and translocated to other places — unfamiliar territory — has only a slim chance of survival. They would also know that removing a snake — and these could be harmless ones like the rat snake — could leave an empty niche for a venomous variety like the cobra to take over. It is best to let sleeping snakes lie.

On the other hand, with the prime minister visiting and a crowd of more than 50,000 expected to witness the event, one can understand that it is not considered wise to have snakes in that area, especially considering the disturbance caused by the influx of huge crowds. It is the way of the VIP here in India. When former President Pratibha Patil visited Port Blair, 400 trees were chopped off to accommodate her helicopter.

But is it prudent to hold such a mega event at a pristine venue? Surely, there are other suitable places? Or if such a function has to be held here, go with a small and beautiful affair, with minimal disturbance, and in sync with the ethos and the spirit of the venue. That will be in tune with the essence of yoga which is ahimsa, peace, to be one with nature.

An event presided over by the prime minister will necessitate complex security arrangements. With huge crowds will come disturbance, mounds of waste, and a legacy of tamed wilderness, of little respect for our natural heritage and environment.

This at a venue where one expects students to imbibe respect for their natural environment, to conserve forests (admittedly also commercial forestry).

The message it sends is that there is a different set of value systems for the society at large, and for other, “important” people. As conservationists, and as foresters, the message we seek to convey to people is to be accepting of wildlife, not to cut and prune trees. That just the mere presence of a wild animal — be it a leopard or an elephant or a snake — is not conflict, and it is better to leave them be.

This, we convey to people, including local communities who bear the brunt of living with wildlife — crops devastated by wild boar, livestock lifted by predators, and the occasional, tragic loss of human life.

And here, we are sniffing out and catching snakes just because they exist in their natural habitat.

We need to practise what we preach.

And Mr Prime Minister, it is not just yoga which is part of our rich tradition and culture, India’s indigenous flora and fauna is intrinsic to our country’s fabric, and rooted in our culture. We worship nature — from trees to snakes. At the World sustaining Summit in February 2018, you said, "Respect for nature is part of our culture.”

Then why is one culture greater than others, while nature remains a stepchild?

Also read: Don’t stop at #WorldEnvironmentDay. 10 simple rules to live by to save Earth